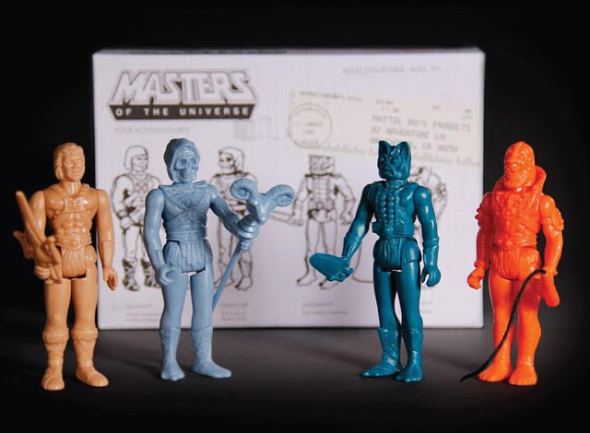 “When you think of the He-Man and Masters of the Universe Action Figures from the 80’s, you instantly imagine a genre defining toy style packed with big muscles and even bigger playsets. But what if there was more to the story? What if a toy sculptor had started from a different point of view before changing the toy proportions to what we know today. What if those prototypes were found? What if?”

As if the monumental M.O.T.U.S.C.L.E reveal wasn’t enough, the guys over at Super7 have been hard at work on yet another must-have SDCC exclusive set in the rich world of MOTU… the Masters of the Universe “Stage 01 Prototype” collection! Closely resembling the 1970’s era 3.75” scale action figures, the set includes 4 unpainted figures with their own individual weapons – He-Man and the Power Sword, Skeletor and his Havoc Staff, Mer-Man and his sword and Beastman with his whip – each authentically realised by one of the original 70’s Star Wars figure sculptors and coming complete with 5 points of articulation. Only available only at Skeletor’s Lair (the Super7 SD store) during SDCC – check our previous post for details on entry – the MOTU “Stage 1 Prototype” set will be limited to 1 per person for just $60 each… Stay tuned for yet more Super7 SDCC reveals soon!