We’re back after nearly a month long hiatus, kicking things off with an in-depth look at our very own Tru:Tek‘s latest collaborative series with DeathCat Toys… Deathtek Machin: Chaos Dimension!

Joining the previously announced NEO JPN SFB, RESTORE have just revealed another all-new figure that they’ll be debuting at Wonderfestival later this month, the stunning DEBRIS BONE! Whilst NEO JPN is a soft vinyl interpretation of a previously released garage-kit, this figure, funnily enough, takes completely the opposite route, offering up an unassembled, resin cast set based on the skull of RESTORE’s signature sofubi, DEBRIS. Due to be making its debut at the event on July 27th, it would appear that 2 different versions will be up for grabs; a raw, unpainted set perfect for customisers and hobbyists alike, and a production edition, coming assembled and treated to a weathered bone finish. Pricing and edition sizes are still to be confirmed, so be sure to keep an eye on the RESTORE blog here for more details soon…

After over a year in the works, Ted Terranova and Cool Mini Or Not are proud to reveal that the Rivet Wars board game Kickstarter campaign is now live! Based on the fictional world Ted has built up through his various resin figures, the game game draws from his experience working on RTS games like Rise of Nations, whereby players gather resources (bunkers and capture points) and use these to deploy streams of new units against the enemy. Featuring a whole cast of new figures including grunts, the Quad Stugg, Rocket Bike, Mono Wheel, Cavalary and MT-1 Ostrich, the standard board game will feature a staggering 38 units, plus dice, double sided tiles, action cards and tokens… With pledge tiers starting as low as $30 for the exclusive Veteran/r100 2 pack, right up to (and beyond!) $150 for the full standard set, there really is no reason why any Rivet Wars fan can’t get involved. As an added incentive, Ted has also offered ‘goal stretches’ if certain targets are met- the best most surely being cardboard tiles and spawn points being replaced with 3D plastic ones- yes please! Expect more news on the project soon…

As mentioned last week (Custom Street Shark post, here), our good friend Adam Pratt has been busy working on an awesome new blind-boxed custom Android series, the Mega Mechas! Taking the kit-bashed army aesthetic that we’ve come to know and love, Adam has produced 16 pieces for the series, with 7 common designs, 5 uncommon, 3 rare and one ultra rare. Featuring a plethora of cool accessories and colourways, each level of rarity offers a more complex style of customisation, including increasingly unique and intricate paint schemes, decals and such. Adam has stated that 2 of the Mega Mechas will come with a golden ticket, entitling them to an extra custom Android chase! Priced at just $40 each, the signed and carded figures will be hitting Adam’s store tomorrow (May 11th) at 1pm, and will be available to order (with free shipping!) for a limited 24 hour period… 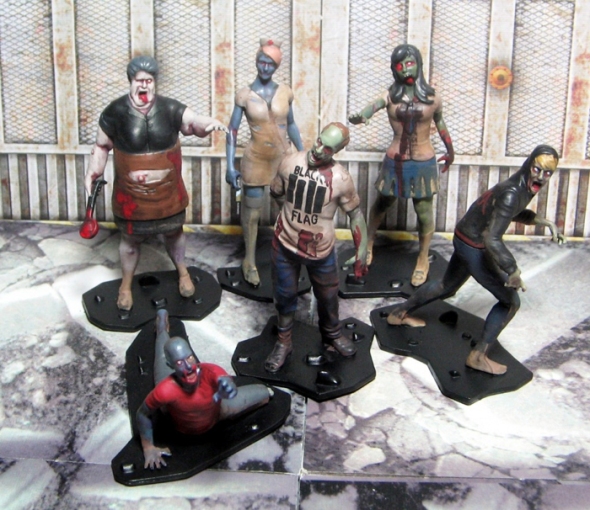 With the utterly brilliant “Box-O-Zombies” touching down a few weeks back, our good friend Adam Pratt wasted no time in getting to work on them, with his first batch getting a full reveal last week. Consisting of 6 pvc “green soldier” style mounted figures, the Box-O-Zombies’ high level of realism and adherence to scale over the likes of S.L.U.G and OMFG has given Adam the leeway to produce some of the most jaw-dropping customs we’ve seen from the artist to date. Unfortunately, these guys have already found a home in one lucky person’s collection, but if you’re interested in bagging a set, head over to his site now to make an enquiry…

“Box O Zombies is owned by Immersive Realms, Inc. founded and operated by Shawn Recinto. The figures and artwork are created by a few Chicago artists who have a passion for zombies, figures, and just making things awesome.

Box O Zombies was initially inspired by Shawn’s kids. Whenever he saw his sons play with their toys i.e. little green army men, they usually ended up pretending zombies were attacking their soldiers as they would try to protect/defend an area in their sister’s dollhouse. So Shawn looked online for some zombie figures similar to the little green army men and discovered that there were not many options. The options that were out there didn’t have that scary zombie look the toy soldiers would fear, so he pitched the idea to a local artist and thus Box O Zombies were born.

Since December of 2010, our small group at Box O Zombies have been working hard to make this possible. We are proud to announce the beginning of a fun and creative company.”

Featured here last week, Ted Terranova and Adam Pratt‘s custom “Blighter Quad Stug” box set will finally be touching down in the Rivet Wars store next week- replete with a whole host of unexpected treats! Featuring 5 custom Quad Stugs from our good friend Adam, each lucky collector who manages to snag one will also receive the following-

Easily the most feature packed and comprehensive Rivet Wars release to date, the Quad Stug box set will be retailing for just $85 plus shipping. Anyone interested in picking up this fine package is going to need to head over to the Rivet Wars store on Thursday, April 26th at 9pm EST prompt- we give them 2 minutes before they’re all gone! 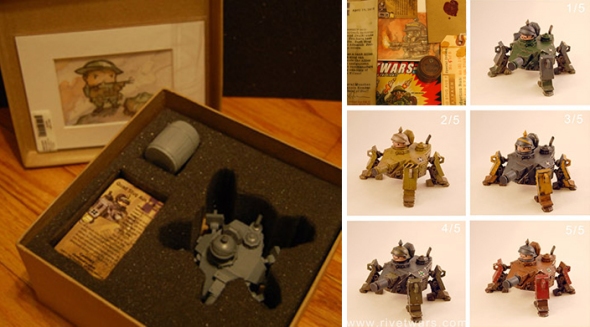 Since opening his newly designed site, UK based graffiti artist Hoakser has once again been hitting the customs hard, with his first reveal coming in the form of the breathtaking “Vandalised Graffiti Truck”! Hand painted with acrylics, and weathered to the high standard we’ve come to expect from the artist, the transformed old toy truck has been adorned with 2 chrome, white and black pieces, reading “Addicted to GRAFFITI” and, of course, “HOAKSER”. Up for auction on the Hoakser eBay store as of yesterday, the reserve on this stunning piece has been set at just 99p plus shipping, with bidding closing on April 26th at 3.46pm BST…