Super7’s Masters of the Universe MUSCLE Wave 2 Trash Can… 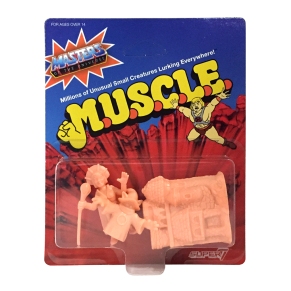 Originally making a limited debut in 24-pack form at SDCC ’16 a couple of months back, Super7‘s officially licensed M.O.T.U.S.C.L.E Series 2 is now finally available via general release! Featuring all 12 new sculpts (He-Man, Stratos, Sorceress, Orko, Fisto, Battle Cat, Grayskull, Skeletor, Evil-Lyn, Kobra Khan, Spikor, and Stinkor), the authentically realised 2″ tall PVC figures have been cast in a classic fleshy-pink this time around, coming split up into 4 blister packed bundles of 3. Currently up for grabs through the Super7 store right here, each pack will set you back a wallet friendly $6 plus shipping…

Up and coming Hong Kong sofubi producers Mamemoyashi are proud to announce the arrival of their first ever figure, the adorable Maguro! Created as part of a series of sea food inspired monsters, the blade wielding tuna fish stands at around 5″ tall, complete with 4 points of articulation and a rather interesting sushi-style torso design. Cast in what appears to be a mix of white soft vinyl and PVC with beautiful life-like metallic blue/neon red sprays with silver highlights, this first version is currently up for grabs through Vintage Vinyl Club for just $390HK ($50) until the end of July… Living in North America? Then you’ll be glad to know that native retailer myplasticheart will also be carrying a limited number of Maguros soon too… 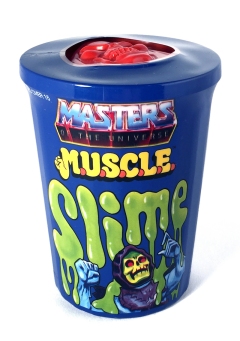 Super7 have revealed that they’ll be descending upon LA’s Power-Con: The He-Man and She-Ra Toy & Comic Book Experience next month with an epic new exclusive… the M.O.T.U.S.C.L.E “Slime” Trash Can! Featuring all 12 figures from the original MOTU x M.U.S.C.L.E line-up, the classically styled 2″ minis have been produced in a gorgeous clear slime green PVC, coming packed in an authentic trash can rub with moulded Skeletor lid and plastic Slime wrap. Going on sale at the event between June 4th and June 5th, we’ll be keeping our fingers crossed that any leftovers make it online soon after… 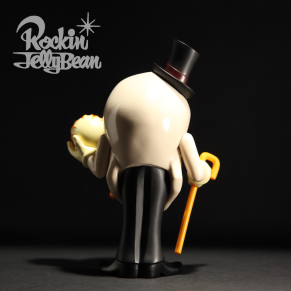 With off-white and black versions now tucked firmly under their belt, Blackdots and Rockin’ Jelly Bean are proud to reveal that their debut “Freaky Monster Village” sofubi – Mr Death – will be see his first fully-painted colorway this week! Inspired, sadly not by RJB’s signature erotic psychobilly art, but instead by hotrod culture and the early sofubi scene of the mid-late 90’s, the stunning, cigar smoking skull was designed and sculpted by RESTORE’s Abe Junnosuke, featuring articulation in the waist and arms as well as fully-removable cain and eyeball. Produced by Blackdots in a mix of soft vinyl, ABS and PVC, the figure has been treated to a realistic palette of charcoal greys, ivory and brown. Going on sale via limited preorder through the Yamakichi store right here starting Tuesday, March 29th at 11am Japan time, the full-color Mr Death will set you back 10,800yen plus shipping…

Joining the previously featured MOTU ReAction Figures, Super7 unveiled yet another release they have planned for their ongoing Masters of the Universe takeover… the M.U.S.C.L.E MOTU Trash Can packs! Featuring all 12 previously released sculpts, the authentically sculpted 2″ figures have been produced in a plethora of different colored PVC that mimic many original M.U.S.C.L.E colorways. Coming packed in a shrink wrapped clear plastic trash can complete with an embossed Skeletor head on the lid, we expect to see these roll out through all major art toy retailers very soon… But that’s not all. Joining the Trash Can packs, Super7 have also revealed that they’ll be extending the M.U.S.C.L.E universe even further with a number of other licenses throughout the year. Whilst specific details are still thin on the ground at present, Capcom’s classic platformer Megaman is the first to be confirmed so far- a choice we’re sure will fit the keshi-style platform perfectly… Expect more news as we get it!