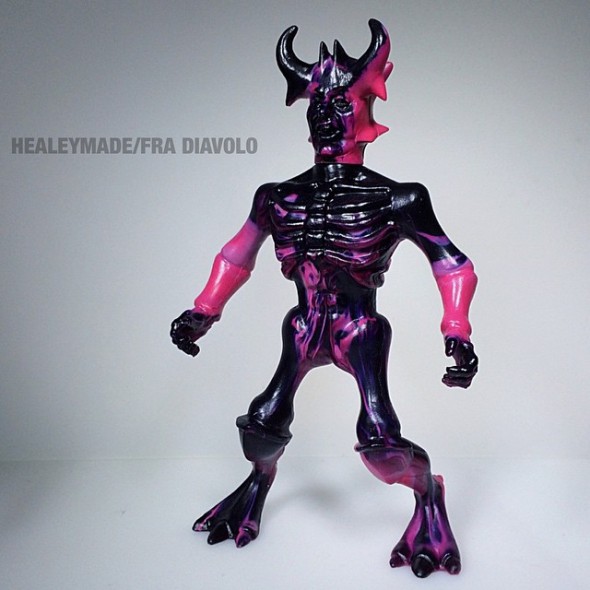 Marking a brief side-step from his regular 3.75″ work, Healeymade has just revealed his latest 5.5″ resin figure, the jaw-dropping Fra Diavolo! Rather aptly translating from French as “Brother Devil” – the nickname given to notorious Neapolitan guerrilla leader Michele Pezza – the stunning MOTU-scaled piece has been meticulously kit-bashed and re-sculpted from various vintage action figures, coming cast in a mesmerising pink and black swirled resin for this debut release. Offering the perfect chance to spend that Christmas cash that’ll no doubt be burning a hole in your pocket over the weekend, Fra Diavolo will be touching down in the Healeymade store on Boxing Day (12/26) at an undisclosed time. Keep track of the Healeymade Instagram feed here for full details on the drop later in the week…

Celebrating the opening of the SUCKHOLE 3 studio over in New York, The Super Sucklord has decided to offer up something a little special for all those unable to attend the new space’s first open-studio event this weekend… the “Produce of the Universe” food toy mash-ups! Originally planned for release at the last SUCKHOLE, these (non-edible!) one-off, 5.5″ customs have finally been unearthed and uploaded onto the new Suckadelic Shopify store right here. Featuring singles and paired up doubles from the likes of MOTU, Thundercats and TMNT, each comes mounted on a signed, plexi-glass base by the artist, with prices start at just $60 each plus shipping…

END_OF_DOCUMENT_TOKEN_TO_BE_REPLACED 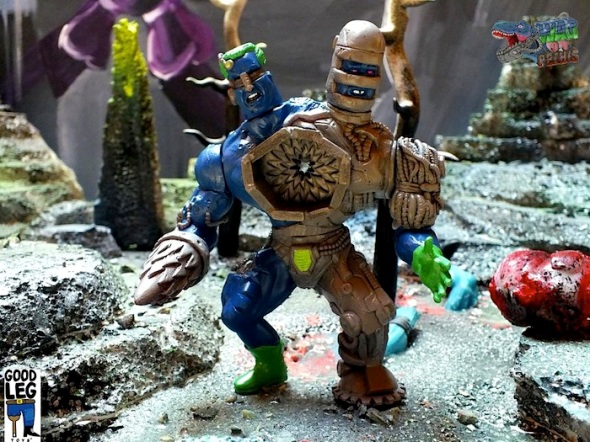 Celebrating the first anniversary of War on Prehis in style, the fine chaps over at Goodleg Toys are proud to present the series’ craziest figure yet… the abominable Meatgrinder! An awesome mix of vintage KO action figures and intensive re-sculpting, the 5.5″ tall monstrosity comes hand cast and painted, featuring a total of 5 points of articulation in the heads, waist and shoulders. Packed with a custom header plus both “Rise of the Mace Drone” and “Attack of the Skull Squad” WoP mini-comics, Meatgrinder is currently available in the Goodleg Toys store right here for just $75 plus shipping. Preorders will remain open until Sunday, April 6th, so be sure to head over soon to avoid disappointment! 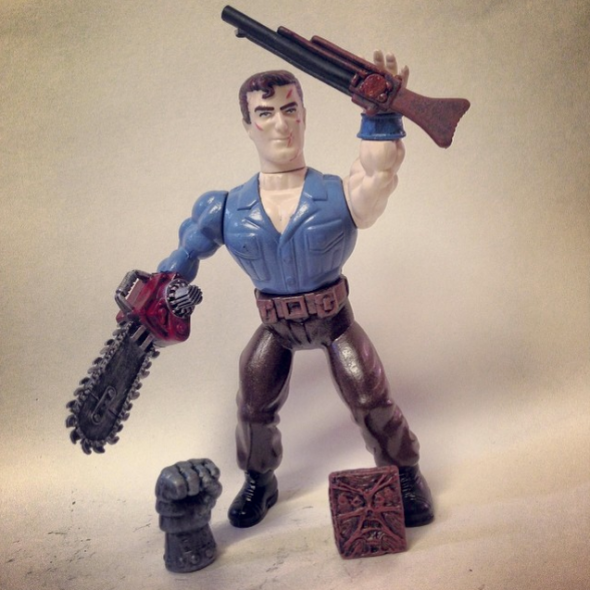 Taking his celebration of this week’s Ash Wednesday quite literally, Brandon Barker over at ManOrMonster? Studios has readied a very special figure for the occasion… the one and only Ash from cult classic Evil Dead! Kit-bashed and re-sculpted from a huge selection of vintage 5.5’s, the hand cast and painted resin action figure comes loaded with features and extras, including the standard WoW compatible neo-mag articulation, interchangeable chainsaw AND gauntlet arms from both Evil Dead 2 and Army of Darkness, a mountable boomstick, plus the source of all Ash’s problems, the Necronomicon itself! Limited to an edition of just 6 figures (plus one “Gory” variant!), the figure will be touching down in the MoM? store this Wednesday, March 5th for around $80 plus shipping. Keep track of the MoM? IG feed here for an exact release time…

Dwaine Espinoza over at 5.5 Customs is proud to present his latest custom bootleg action figure, the amazing ‘Valentine’s Day’ exclusive Bloodshot! Kit-bashed from a variety of vintage MOTU action figures including Clawful and Mantenna that have been recast and painted in the striking red/black colourway you see above, coming bagged and headed with custom cloth cape. Due to drop on February 14th in extremely limited numbers, be sure to stay locked on the 5.5 Customs Facebook page here for news on exactly when and where Bloodshot will be making an appearance…