After months on the drawing board, the debut sofubi from Canada-based toy artist Monsterfoot Creations – the awesome Skull Boy – is now looking to get funded via it’s very own Kickstarter campaign! Standing at around 8″ tall and coming with articulation in the head, arms and waste, the neo-kaiju style figure is due to come cast in a standard, unspecified colorway as well as a limited, Kickstarter exclusive GID. Currently up for grabs with a variety of different pledge tiers available – ranging from $60 for the basic figure, $75 for an additional “Super Battle” head, and $200 for a custom hand paint from a selection of top artists – Skullboy will be available through his dedicated campaign page right here until close on Friday, May 15th… 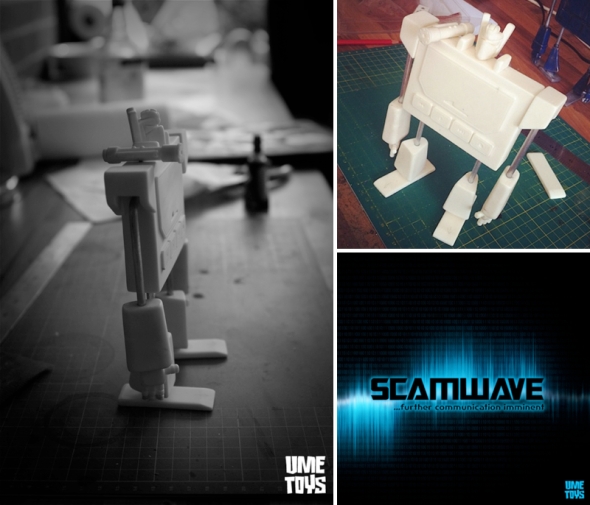 Originally teased here last week, Richard Page over at UME Toys has just revealed the first test-pull of ScamWave… and it’s EPIC! A re-make of Rich’s incredible one-off Soundwave sculpt created last year (check him out here), the new version features a tighter, chunkier design than it’s predecessor, standing at around 7.5″ tall and now coming with a whopping 9 points of articulation. To be painted up in the familiar weathered navy blue and silver of the original, we’ll be keeping our fingers crossed for a full reveal plus those all important release details later in the week… Keep track of the UME Instagram feed here for further developments as they happen!

After having to wait a little while longer than expected for some quality decals, Rich over at UME Toys is proud to finally unveil the much anticipated Soundwave sculpt… and boy, was it worth the wait! Featuring the same unmistakable broken-geometric style as the previous Iron Man sculpt (featured here), the long spindly arms and legs, coupled with the flat design of of the body really help give a new spin on the well-worn Transformers aesthetic… giving the robot an almost vulnerable feel that we’ve never seen before. Sculpted using polymer clay and finished in Rich’s usual signature weathered style, Soundwave should be touching down in the UME Toys store sometime soon for around £190-£200. Stay tuned for a full reveal of the UME Toys NYCC skulls tomorrow, including at look at the very special one-off “Brains” edition!

With the recent announcement of Hasbro’s Transformers licensing agreement with both Super7 and the Loyal Subjects, it only seemed fitting that Rich over at UME Toys should finally bring his popular Soundwave illustration to life… and judging by the above WIP shot, this will be the one take on the popular franchise that is sure to not disappoint! Very similar in style to Rich’s 2011 Iron Man sculpture (which just so happened to be the first piece of Rich’s work we ever featured!), the beautiful piece has taken hours of painstaking sculpting and sanding to achieve a stunning “perfectly imperfect” geometric style. Currently awaiting a final lick of paint plus authentic hand cut decals, Soundwave should be revealed in his final state at some point later this week…

Kidrobot LA let the cat out of the bag through their twitter feed yesterday, revealing pics of the latest Kidrobot exclusive, the white/pearl Asia MiniGod Buddha from Marka27. Limited to just 100 pieces worldwide, the 6″ mini-MiniGod features a functioning speaker that works with ipods, ipads, mp3 players and any audio device with a headphone jack. Priced at only $40 each, the figure will only be available at select Kidrobot retailers across the globe, so anyone interested should start tracking them down now!

The art toy scene saw the arrival of its youngest contributor this week, with 11 year old (!) Jacob Sieglbaum aka JAMS releasing his very first figure in the form of “Dropping Jaw”. Coming in an initial clear blue colourway, the 2.5″ hand cast resin figure will be available to purchase exclusively through Tenacious Toys for a pocket friendly $15 plus shipping. The young prodigy has stated that this will be the first of many editions planned for the toy, so watch this space for more info in the coming months…

Psychedelic supremo Bwana Spoons has just revealed his latest custom toy project, the ERV (Earth Restroyer’s Revenge) glow-in-the-dark Hedoran from Gargamel. Limited to only ten figures, the GID Hedoran has been decked out in ‘a gabillion colors of spray and hand paint’ in true Spoons style.

The figures will be available from the Grass Hut shop this Friday (January 20th), Noon PDT, for an undisclosed price.