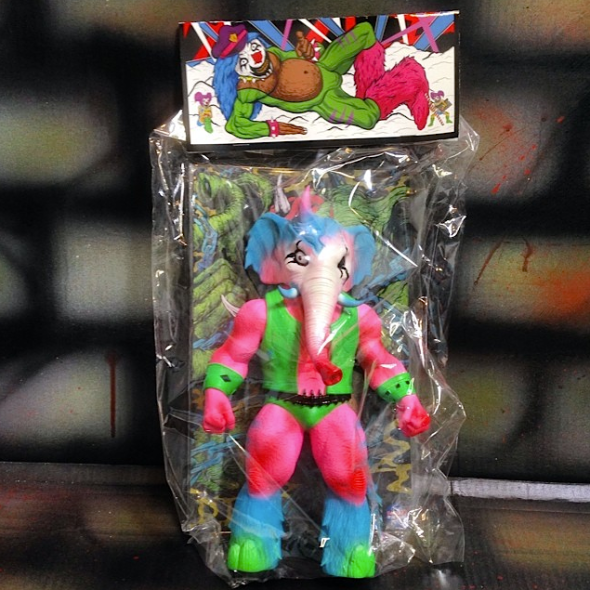 Skinner has just revealed that he will be releasing a special “Dr Rockso” Bullet Belt micro-run this week! Inspired by Metalocalypse’s cocaine-loving rockstar clown of the same name, the 10″ tall, Unbox produced figure appears to be cast in a white vinyl this time around, coming hand painted by Skinner in the doctor’s unmistakable palette of neon pink, blue and green. Limited to just 5 pieces, each coming with a Bullet Belt print and custom header, Dr Rockso will be landing in the Critical Hit store this Friday, June 20th at Noon PST for an unbelievable $150 each- the same price as the standard, factory painted runs! 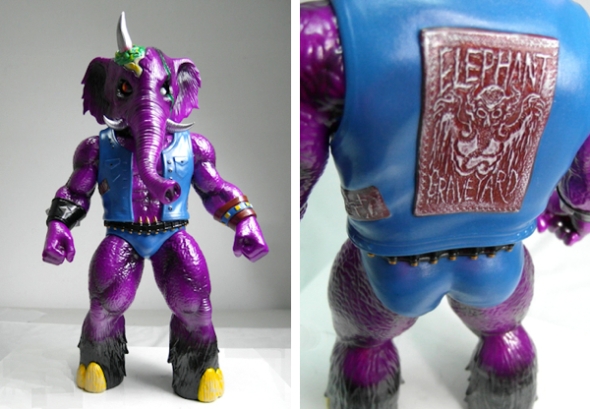 Unbox Industries are proud to announce the launch of a new preorder programme for the latest edition Bullet Belt, the rather aptly titled PURPLE HAZE! Designed by Skinner for the ongoing Triclops B.A.S.T.A.R.D Universe series, the towering 12″ of purple pain features an all-new paint scheme devised by the artist, featuring a mix of black, deep metallic purple and denim blue sprays finished with super-tight hand painted detailing. Once again coming with a bonus ”keshi” style  B.A.S.T.A.R.D injection moulded mini figure (colouring TBC), the pair will come housed in the standard plastic blister pack, replete with a removable print insert designed by Skinner. Priced at $150 plus shipping, the preorder will be running exclusively through the Unbox store from March 20th until March 31st. Unbox have stated that the first 20 pre-orders will be entered into a raffle to win a unique “Nano Belt”- more news on that as soon as we get it! 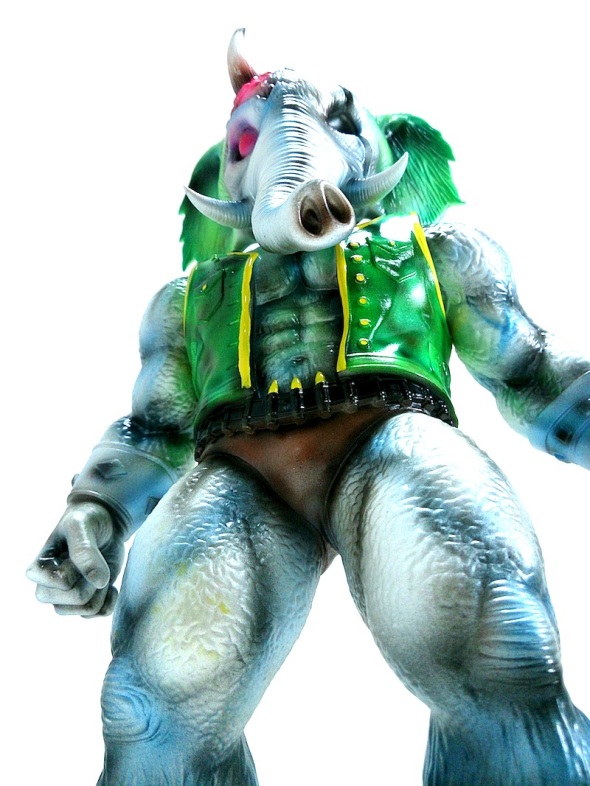 Unbox Industries are proud to announce the launch of a new preorder programme for a very special Mishka edition Bullet Belt! Originally debuting at the Mishka NYCC booth, the towering 12″ tall vinyl figure was originally designed by Skinner for the ongoing Triclops B.A.S.T.A.R.D Universe series, this time around coming in a dazzling metallic colourway devised by Lamour Supreme and approved by Mishka. Once again coming with a bonus “keshi” style  B.A.S.T.A.R.D injection moulded mini figure (colouring TBC), the pair will come housed in the standard plastic blister pack, replete with a removable print insert designed by Skinner. Priced at $150 plus shipping, the preorder will be running exclusively through the Unbox store until October 31st… 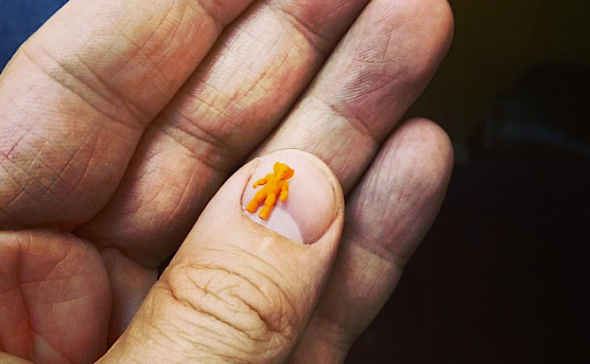 But that’s not all! Judging by their recent Instagram activity, Unbox may be producing a nano-sized version of Bullet Belt in a similar vein to the recent M5 Bravo! Standing at roughly the same height of a grain of sand, we’re guessing this is probably a production experiment more than anything else- doesn’t stop us wanting a whole bag of them to play with though! Here’s keeping our fingers crossed that they make an official appearance somewhere down the line… 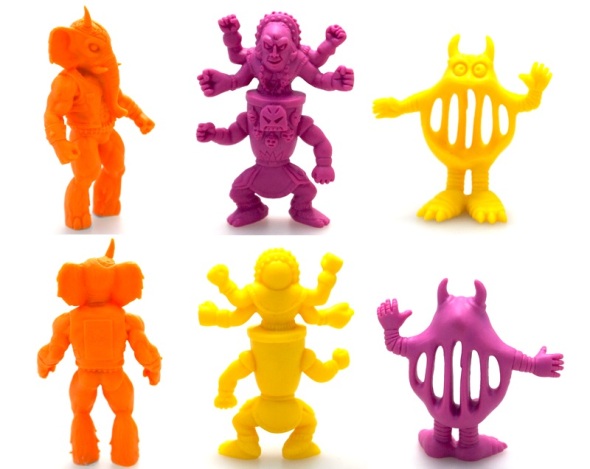 Disappointed about missing out on the last minute mini addition with the recent Bullet Belt release? Then fear not, as Unbox Industries have very kindly unleashed the figure as part of a 3 pack B.A.S.T.A.R.D rerelease! Featuring the original Goober and Big B.A.S.T.A.R.D figures in either purple or custard from the original Triclops x Unbox pair-up, each set now comes complete with a 2″ rendition of Skinner‘s Bullet Belt in glorious, unpainted neon orange rubber. Priced at an unbelievably cheap $12.50 plus shipping, both purple and custard editions can be found in the Unbox store right here… 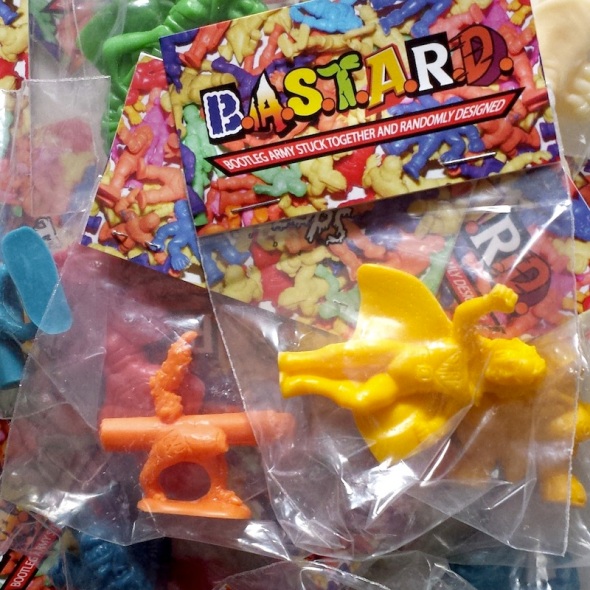 Hot off the heals of the recent OG Bullet Belt debut, the Triclops duo have just revealed a ton of new projects in the works… arguably the biggest coming in the form of the long awaited B.A.S.T.A.R.D store! Set to become the number one online location for all your shonky-tonk toy needs, the shop is set to feature a whole slew of old and new B.A.S.T.A.R.D releases, kicking things off with the previously posted Venice Bastard Beach Twin Pack (check our earlier coverage here). Details on the exact whens and wheres are still to be finalised, so we suggest keeping a close eye on the new Triclops twitter feed for more details soon…

As if news of the impending store opening wasn’t enough, the guys have also revealed that the Bullet Belt blanks will be making an appearance sometime soon! Available in either white, black or flesh, expect to see these guys up for pre-order through Unbox Industries over the coming weeks… we’ll be keeping our fingers crossed for some exclusive customs runs at some point too! Last, but by no means least, Triclops have also dropped a WIP of the latest B.A.S.T.A.R.D, their entry for Super Cooper/TAG’s latest group show, Music To My Ears. Just about ready for it’s silicone bath, we’ll be bringing you the full lowdown on the little guy later in the week… Head over to TAG’s event page here to find out a little more about the event! 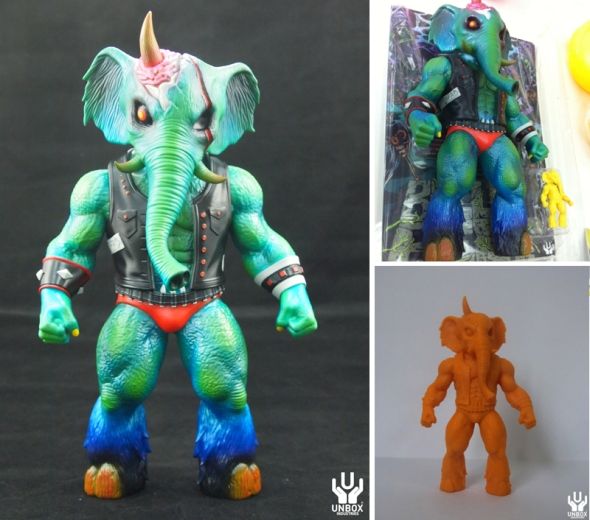 After months of speculation, Unbox Industries are very happy to announce details of the very first Bullet Belt B.A.S.T.A.R.D from Skinner! The debut figure in Triclops‘ new B.A.S.T.A.R.D Universe off-shoot, the lofty vinyl figure measures in at 30cm tall, coming painted in a gorgeous mix of aquas and metallics originally designed by Skinner. Housed in an oversized pop-open blister pack, each full sized figure comes complete with an injection moulded, keshi-style variant, standing at around 2″ tall and coming in a monochromatic yellow exclusive to this first run. Up for preorder through Unbox at Taipei, and through Skinner at SDCC, online sales will begin on July 21st with a price of $150 per set… 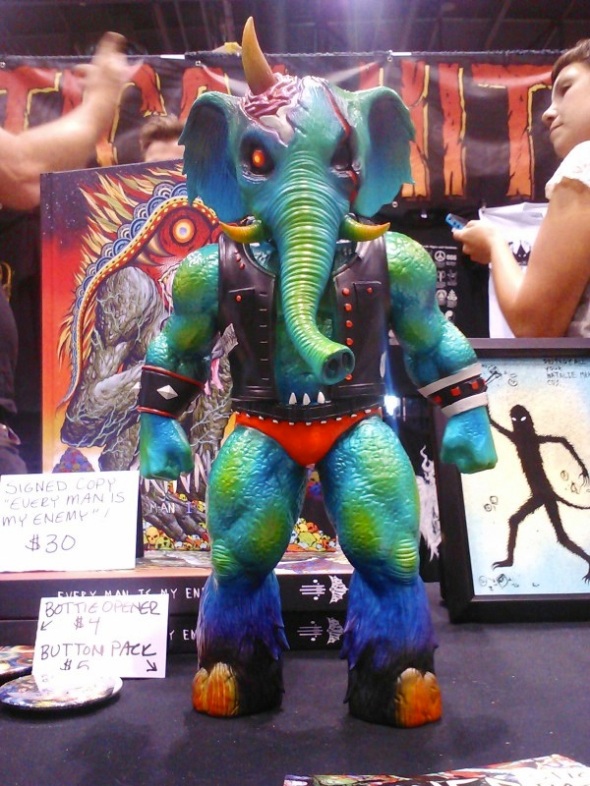 Originally debuting at ToyCon UK earlier in the month in both black and flesh prototype form,  the jaw-dropping Bullet Belt from Skinner made an appearance at C2E2 over the weekend as a fully painted master! Created as part of Triclops Studios upcoming B.A.S.T.A.R.D Universe project, the mini figure inspired piece stands at a lofty 10″ tall, this time coming with Skinner’s signature choice of metallic aqua sprays and black/red detailing. It’s still unclear as to whether this complex paint job will be translated for the full production run, or if it’ll remain a one off piece- painted or not though, Bullet Belt has got to be one of the strongest vinyl figures we’ve seen all year… Fingers crossed either way we see a release soon!