Cash Cannon over at 4TheLuvOfToyzNY has once again teamed up with vector wizard Playful Gorilla for the release of their very first ‘Tee and Toy’ set! Featuring Cash’s recently released ‘Busted Trooper’ and ‘Bobafetted’ resin figures, the Star Wars inspired minis are joined by accompanying designs from Playful Gorilla that have been digitally printed direct to garment cotton tees. Available in a number of different buying options starting from $45, we have our eyes on the ‘Mega Combo’ pack- whereby as well as bagging both figures and t-shirt designs, lucky purchasers also receive a sticker and badge pack (featuring work from both artists), plus a secret 5″x7″ Star Wars inspired print for just $95! Head over to the Playful Gorilla store here to grab yours…

With Clutter’s (In)action Figure Show opening it’s doors tomorrow evening, we squeeze in one last reveal before our BIG post tomorrow… the Mini Boba Fett from Cash Cannon! Pictured here as a work-in-progress, the awesome little figure stands at just over 2″ tall, coming with articulated arms (not shown) plus the obligatory laser rifle… No news on edition size or pricing, but as with all the other contributions we’ve posted this week, we’re keeping our fingers crossed that at least a couple hit the Clutter online store at some point next week! 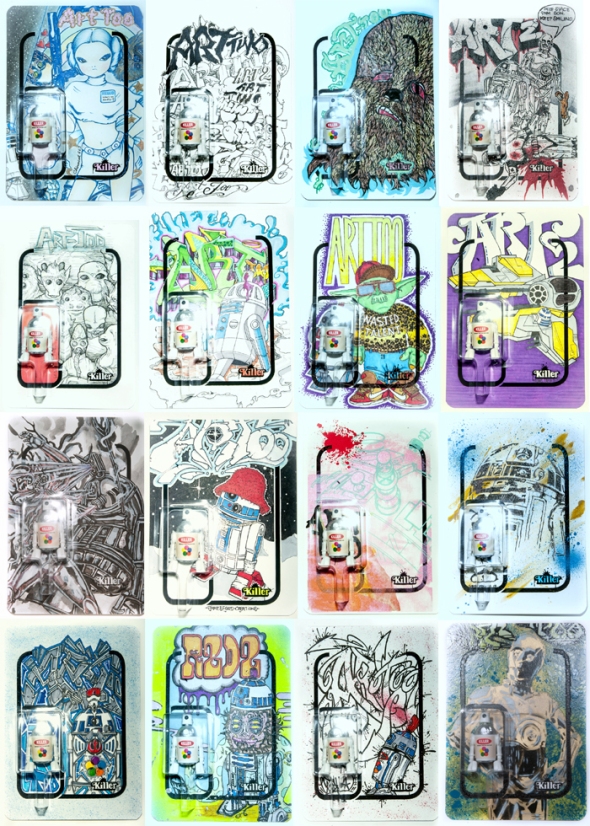 Originally released to huge fan fare last month (find out more here), the awesome Art-Too figure from Killer Bootlegs and UK graffiti artist Hoakser has returned… this time sporting it’s very own Artist Series! Created to coincide with Black Friday this week, KB’s Peter Wheatstraw Goral enlisted the talents of some of the low-brow art scene’s finest, including graffiti writers, stencil/street artists, tattoo artists, and screen printers, each creating unique one-off backing cards for the vintage R2D2/fatcap resin mash-up. Taking inspiration from graffiti, hip-hop and of course, Star Wars, the 16 different designs were sprayed, painted, sketched and stenciled using standard KB cardbacks screen printed by Pirate Ninja. Due to touch down exclusively in the Tenacious Toys store this Friday (November 23rd), each one-of-a-kind piece will set you back $75 plus shipping…

Original package designer Hoakser has also created an additional 2 cardback designs, but due to international shipping issues these will be available at a later date…

Following sell out success at Designer Con recently, Cash Cannon and Manny X have teamed up once again for the second release of Zombie Candy Corns! Sculpted by Cash and produced by Manny, the 2.5″ figures come hand cast in a translucent orange resin, and are available in 3 different flavours; Painted ($35), Un-painted ($30) and blank white DIY ($25). Coming bagged and headed with sticker and small bag of candy corn, the awesome looking figures are available through the Cash Cannon (4theluvoftoyzny) store now… Available in extremely low quantities, be sure to head over quick to avoid any disappointment! 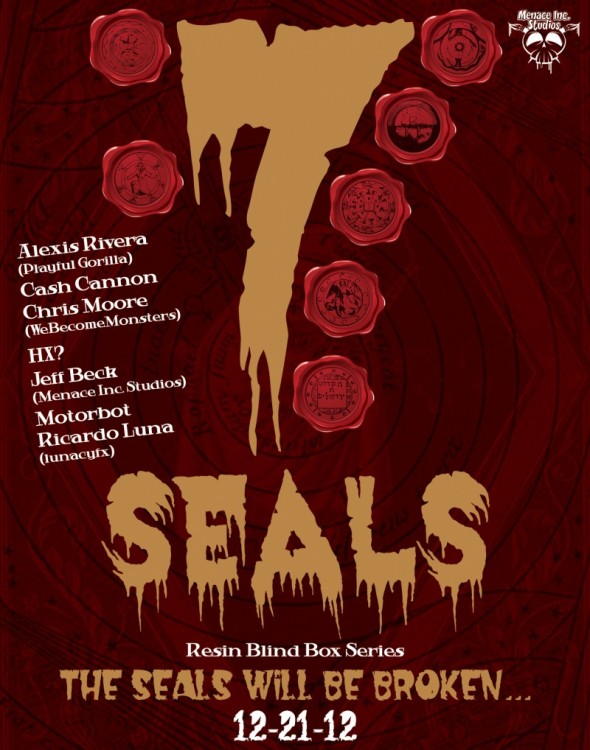 Fresh from the huge success that was “The Rise of the Samhain“, Jeff Beck over at Menace Inc teases us with the first promo image from the studio’s debut collaborative art toy project… the 7 Seals! Due to feature some of the resin scene’s finest including Cash Cannon, We Become Monsters, Motorbot, and of course Jeff himself, the series is set to come blind boxed, with a Christmas release of December 21st. No news as of yet as to what will be featuring in the series (although we’re guessing wax seal designs must feature!), so be sure to stay tuned for more reveals and release info to follow very soon! 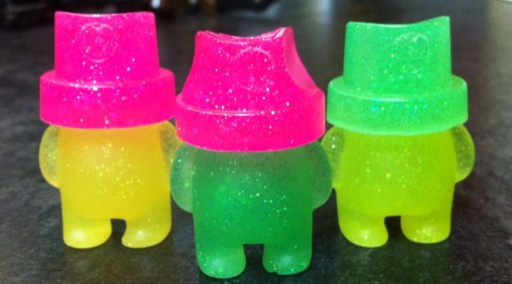 Following the rather awesome Breaking Bad Bee sets we featured last week (check them out here), NYC based tattoo artist-cum-toy designer CashCannon is proud to reveal the first of many NYCC exclusives that will be available next month, the “Fatty” mini resins! Standing at around 2″ tall, the adorable little fatcap headed creatures are due to come in 3 delicious flavours; Strawberry Lemonade, Watermelon and Lemon Lime, each featuring embedded glitter, and some even glowing in the dark! Due to go on sale at the con from booth #3121, the Fattys will be joined by a whole host of other resins, including the soon to be revealed DeadyBear… stay tuned for more info later in the week!