Continuing their run of themed releases, Bryan Borgman over at Bailey Records is proud to reveal that a swarm of aliens will be invading the world of Kaiju Kaos all next week! Touching down in the Bailey Records store tomorrow (12/1) at 9pm Eastern, the event is set to play host to a whole slew of intergalactic mini figures, including Smackdown “Shima” and “Earwig” customs from Clawfreak, Mark Nagata, Ersico and Super Sandbagger. Priced at an unbelievable $10 each plus shipping, we suggest setting your alarms for these as they most certainly won’t be around for long… 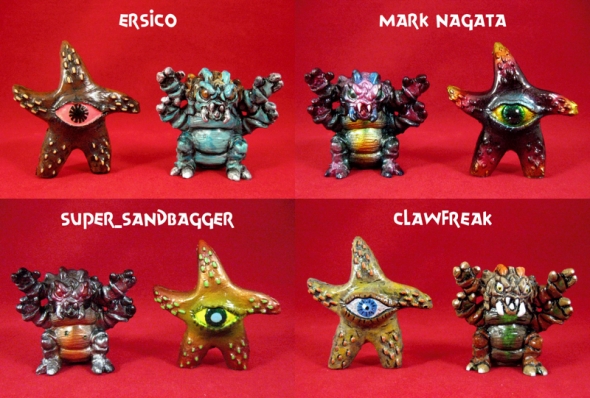 Continuing their run of themed releases in the build up to the Holidays, Bryan Borgman over at Bailey Records is proud to present “Zombie Week” in the world of Kaiju Kaos! Touching down in the Bailey Records store at 9pm Eastern tonight (12/15), the event is set to play host to a whole slew of undead mini figures, including Smackdown customs from Clawfreak, Mark Nagata, Ersico and Super Sandbagger, sculpts from Stratos and Ironhaus Pro, and new unpainted 28mm metal gaming miniatures. With prices ranging from just $2-$10 plus shipping, we suggest heading over early as these most certainly won’t be hanging around for long!

Bryan Borgman over at Bailey Records is proud to announce the launch of “Elder Things”, an awesome Kaiju Kaos custom mini figure run that’ll be up for grabs all this week! Featuring a number of 2″ resin cast figures from indie toy crossover series KK: Smackdown, Bryan managed to secure customs from a number of the scene’s biggest artists, including Ersico, Mark Nagata, Clawfreak and Super Sandbagger. Available in the Bailey Records store right here, we suggest heading over soon to avoid any disappointment- customs have been limited to just 2 per artist, and are priced at an unbelievable $10 across the board! 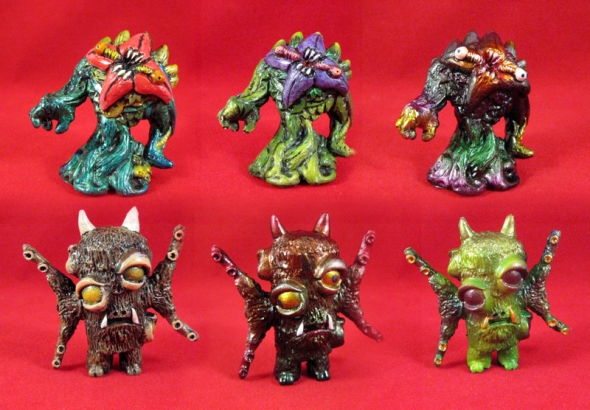 As part of the ongoing “Mega Sale” revealed earlier in the week, 1Shot Toys‘ Eric Villanueva has been dropping a number of secret figures throughout the weekend, our favourite so far coming in the form of these awesome Sgt Zombie Angus’! Raised from the corpse pile by none other than Clawfreak, the pair of rubber-cast figures have been kit-bashed with S.L.U.G Zombie parts, coming in a meticulous blend of zombie-green washes and blood splattered detailing. Priced at just $20 each, the pair can be found in the 1Shot Toys store alongside a whole host of other goodies (including the original Sgt Angus below!) right here…

Eric Villanueva over at 1Shot Toys has been cooking up a whole host of projects over the past few months, so it came with great pleasure this week to find out that ALL of them will be available in one “Mega Drop” this Saturday, September 7th! Featuring a slew of original figures, glyos heads and customs, we bring you the full lowdown of what’ll be on offer in the 1Shot Toys store come launch time…

Clawmania// A collaboration with Clawfreak, this new custom series features recasts of the iconic M.U.S.C.L.E Claw from Eric, lavished with either paint or Monster Kolor dye by the mini figure customiser. Priced at $17 each, these will be sold individually (not bling bagged), so be sure to get in quick to bag your favourite!

War Pug Battle Beasts// Shrinking the original War Pug head down to mini figure size, Eric has cast up a batch of super-limited custom bootleg Battle Beasts! Cast in a mixture of semi-translucent GITD resins (with one UV chase!), the 2″ figures have been priced at $15 each.

War Pug Glyos Heads// Joining the custom Battle Beasts, Eric will also be unleashing the latest batch of normal-sized War Pug Glyos heads! Cast in a mix of pearl orange and pink resins, these will be available for $13 each.

Snack Attack: Sgt Angus// Following preview releases at both CT&TC and Wonder Festival, Snack Attack’s debut figure, Sgt Angus, finally makes his official debut! Sculpted by Eric and cast in a keshi-style rubber by our very own Tru:Tek, the figure will be available blind bag (in either flesh, orange or red/yellow) for just $15 each. Stay tuned for a closer look at these little guys later in the week!

Custom mini figure heavyweights Clawfreak and Ersico have teamed up for their latest custom Glyos drop, rather aptly titled Taste the Rainbow! Featuring a collection of 6 clear PVC Glyos’ including Crayboths, Phedens and Armorvors, the figures have been expertly painted by Clawfreak and dyed by Ersico in a slew of bright Monster Kolor fades, coming finished in a hi-gloss clear coat. Hitting the Clawfreak store last night (March 29th), the little guys have been priced between $15 and $34 plus shipping… We suggest heading over quick if you’re interested though, only 3 of the 6 figures remain! 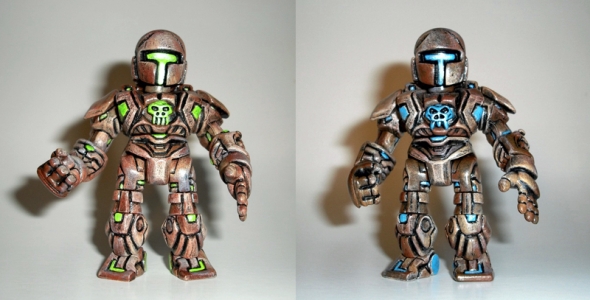 An absolute powerhouse in the mini figure scene right now, LRG forum member Clawfreak has garnered a huge amount of interest through his diverse range of awesome Glyos, OMFG and M.U.S.C.L.E customs, with the recently revealed ‘Sucklavors’ proving to be 2 of his most accomplished pieces yet… Featuring the highly popular Glyos Armorvor body and Sucklord designed head, both figures have received some subtle original sculpting with the addition of skull chest pieces, each coming with a beautiful weathered finish with corresponding neon blue and green accents. Priced at just $42 plus shipping, the first 2 Sucklavors have unfortunately long since sold out- we wait with baited breath for a restock soon!