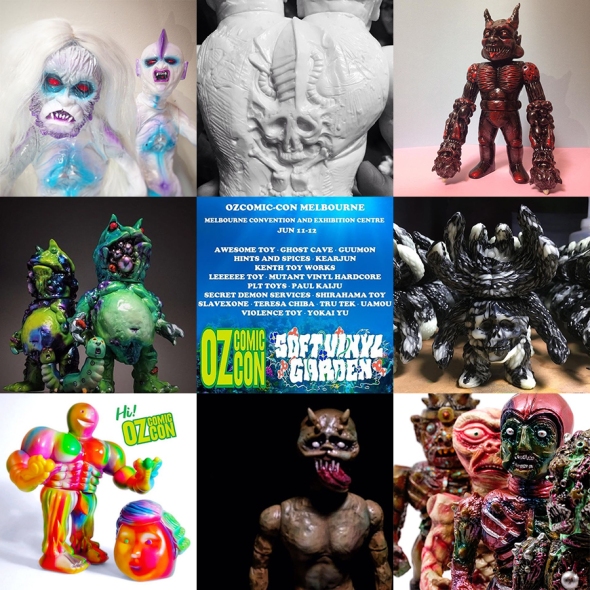 Fresh from their first ever group show a couple months back, Soft Vinyl Garden will be descending upon Oz Comic Con with yet another shed load of goodies from the length and breadth of sofubi! With highlights including the first painted Sludge Fighter one-off from Mutant Vinyl Hardcore, custom Astro Skullbots and Zombitrons from Kenth Toy Works (pictured below), the debut of Miyajuana from PLT Toy, plus a reveal of Solo Is Toy’s Molochowl amongst many, many more, interested parties Down Under are going to need to make the trek to the Melbourne-based con this weekend to check out this incredible line-up. Opening its doors at the Convention and Exhibition Centre at 9am tomorrow (6/11) for 2 days of toy/comic-relayed goodness, we’ll be keeping our fingers crossed that any leftovers from the booth make it online soon after… 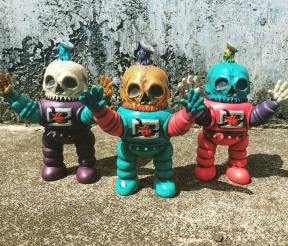 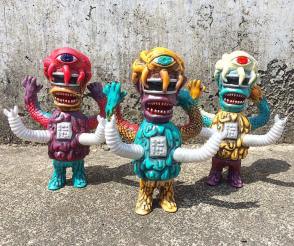 Joining ManOrMonster? Studios‘ Heisenborg and Army Brat (both featured here), Galactic Jerkbags are proud to announce another 3 exclusives they’ll have on offer at their Designer Con booth (#122) this weekend, so without further adieu we bring you the full lowdown…

Killer Bootlegs’ Ewoking Dead// Killer Bootlegs resurrect the ever popular zombie ewok for one last colourway! Limited to 50 pieces in total, each has been cast in resin, coming handpainted and flocked by KB’s Peter Goral. Packaged on an awesome cardback made by Sidekick Labs, the Ewoking Dead have been priced at $80 each. Dropping at 1pm on Saturday (11/9), Peter will be on hand at the booth for signing duties.

Tone Tank’s Lemon Hombre// Tone Tank debuts his latest custom bootleg wrestler! Standing at the standard 5.5″ tall, the resin cast figure has been flocked in a bright lemon yellow. Limited to just 10 pieces this time around, Lemon Hombre will be up for grabs on Saturday for $60 a piece.

Galactic Jerbag Glyos V2// The second version of the Galactic Jerkbag Glyos, a tribute to Sucklord’s original 3.75″, the fully compatible figures features a hand cast resin head and vinyl cape, produced and dyed in a bright green by Killer Bootlegs. Packaged in a cool double blister that also comes with a unique sketch card by Irishmofo, these have been limited to just 10 pieces priced at $45 each. Expect these to go on sale at the beginning of the con on Saturday (11/9).

Following the test shot revealed over the weekend, ManOrMonster Studios can finally unveil the 2 all-new figures they’ll have up for grabs at Designer Con over the weekend! First up we have the previously posted Heisenborg… Based on artwork originally created by Ryan Browne, the hilarious homage to the king of chemistry was designed/kitbashed by Brad Rader of Battle Babies fame, with production handed over to MoM’s Brandon Barker. Standing at 4.5″ tall and featuring WoW compatible neo-mag joints, the resin figure is actually the first ever carded MoM figure, coming complete with an Iron Man inspired paint job, test tube accessory and a Sky Blue background diorama, all housed in a resealable plastic clamshell. Limited to an edition of 6, Heisenborg will be available from the Galactic Jerkbags booth (#122) for $75 a piece. 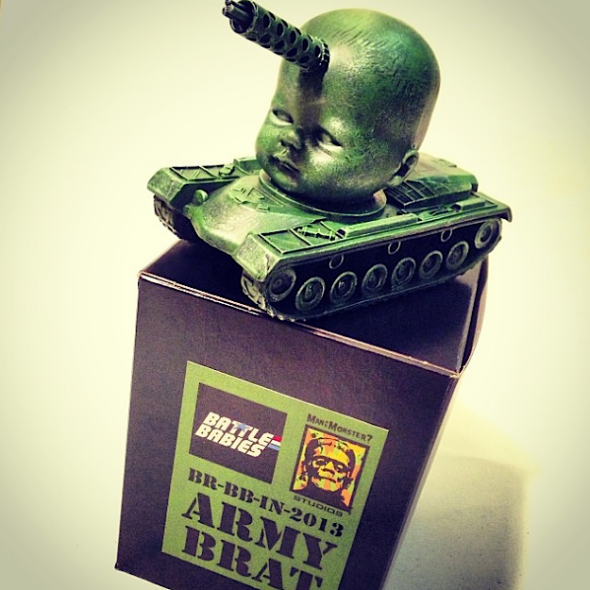 Next up we have yet another MoM? x Battle Babies collab, as Brandon and Brad team up for the release of ARMY BRAT! Featuring a creepy mix of kitbashed dolls and tanks in the unmistakable BB style, the figure has been cast in resin by MoM?, featuring WoW compatible articulation and a weathered army green paint job. Again limited to 6 pieces, each coming housed in a custom made box, the ARMY BRATs will also be available at booth #122, priced at $80 each… 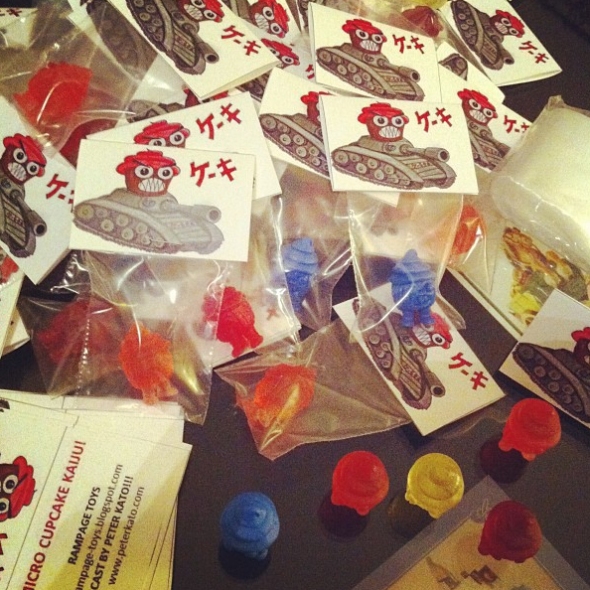 Following a hugely successful turnout at NYCC over the weekend, Jon over at Rampage Toys has just revealed the highly anticipated list of con stragglers that will be heading to the Rampage store upon his return to Tokyo this week. Featuring a whole host of previously posted custom collaborations including the breathtaking GID Rampage Diagomis, various Mechavirus pieces, the hilarious Man-Nies, plus Jon’s latest resin mini, the Micro Cupcake Kaiju (in a whole rainbow of clear tints!), the full list (plus photo links) have been included below… Initially to be offered up to newsletter subscribers over the next few days, expect the remaining figures to hit the store by the weekend. 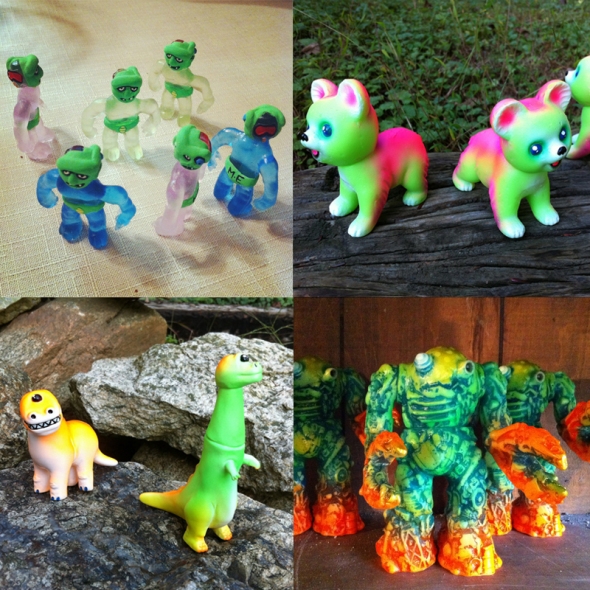 Whilst we fully revealed UME Toys‘ NYCC skulls last week (find out more here), we’ve decided to take a another look at a couple of the designs that will be available come October time… First up, the absolutely gorgeous Copper Skull has been meticulously finished in a rich metallic spray, coming with subtle turquoise copper-oxide traces around the teeth, eyes and nose. Fastly becoming the “second” UME colourway, the copper tones suit the skull’s minimalist nature to tee, giving a real sense of weight and presence to an already amazing sculpt… Easily our favourite of the bunch so far, the zombie inspired Brains Skull was actually created from a cast that went wrong! Not wanting to waste the vast lump of resin, Rich ingeniously set to work in sculpting brains over the top to create the jaw dropping piece you see above. Painted in a mixture of bone and flesh tones, Rich has added subtle washes to create the signature weathered UME look… fingers crossed it wont just be a one-off!

Stay locked on the UME blog for more reveals as we get closer to NYCC, and be sure to keep an ear to the ground for a VERY special related announcement soon…

Designer toy collectors Jonjo Glynn, Ben Hart and Barry Darnell have finally answered the prayers of thousands here in the UK, with the official reveal of the country’s very first art toy convention! Dubbed ToyCon UK, the event is set to take place on Saturday, April 6th 2012 (364 days and counting!) at the Baden Powell House in Kensington, London. With most of the UK’s premier talent already confirmed including A Little Stranger, Cris Rose, Doktor A, Fugi.me, Hang Gang, Lunabee , Jon-Paul Kaiser, Matt “Lunartik” Jones, Mintyfresh, TADO, Triclops, The Tarantulas, Squink, Ume Toys, and Unbox Industries, ToyCon UK is already looking to compete with it’s bigger US counterparts, offering the best in vinyl, resin, and plush that our little island has to offer. Expect more news on this awesome project soon…

The Jelly Empire’s Selina Briggs has just sent over a teaser for her latest project with Eric of Argonaut Resins, the JellyBot 2.0! Set to debut at the  MOCCA Festival in New York on April 28th and 29th, the pair have promised to reveal more about the project closer to the time. For now though, I guess we can only speculate from the above image what to expect- our money’s on a revised cube shaped body! Expect more info as soon as it hits…