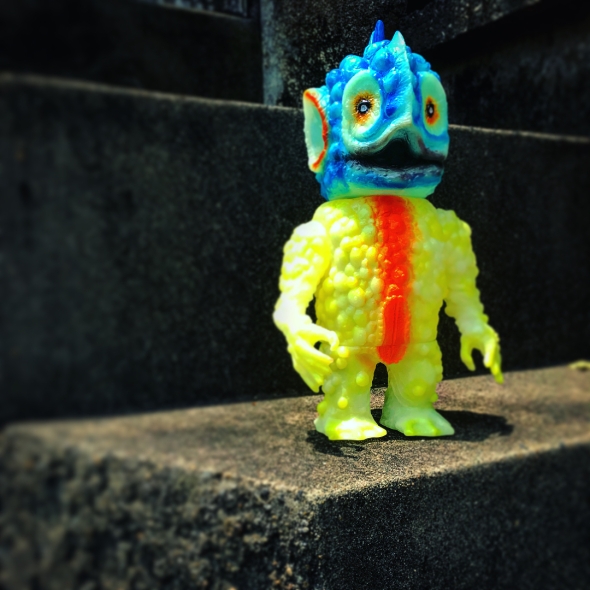 Angel Abby have teamed up with Longneck‘s Yoda Masahico for the release of an exclusive Yusei and Moon Maijin set! Standing at around 14″ tall each and produced in a black squishy soft vinyl, the highly sought after pair have been treated to matching paint apps in a mix of metallic blue, pink, flesh and green with alternating neon green and pink highlights. Currently on sale via e-mail lottery for $450 each plus shipping, anyone interested in bagging the pair is going to need to fire over an e-mail to andy@angelabby.com between Saturday, May 27th – Sunday, May 28th HK time, being sure to include their figure preference (Yusei, Moon or both), name, address, phone number and PayPal address… Good luck to all who enter!

As if the reveal of Mecha Gorilla last week wasn’t enough, Yoda Masahico of Cosmo Knight Alpha/Longneck has just unveiled yet another figure in his new Machine Soft Vinyl Series, the awesome Zollbots! Featuring the same vintage ‘bot inspired body, the towering 12″ tall figure comes with an all-new head that resembles a mechanised version of Zollmen’s “Robin” Fancy Toy and “Garuban” Ape combined- although we’re not too sure if that was the intention! Painted up in an eye catching mix of metallic blue and red sprays over orangey-yellow vinyl, the first edition of Zollbots is currently up for grabs to Japanese customers through Yoda’s Instagram feed right here. Hopefully we’ll see an international release sometime soon!

It’s been a few years since the debut of his last 100% new figure “Yusei Maijin”, so it came with great pleasure today to find that Yoda Masahico of Cosmo Knight Alpha/Longneck has been hard at work on yet another bonafide sofubi classic… the jaw-dropping Megagorilla! Based on the (as-yet-unverified) vintage mecha gorilla mini pictured above, the towering beast stands at an impressive 12″ tall, coming complete with 5 points of articulation. Currently available to Japanese customers via Instagram in an authentic “OG” paint app of blue, silver and brown over red vinyl, we’ll be keeping our fingers crossed for an overseas Megagorilla release over the next couple of months… 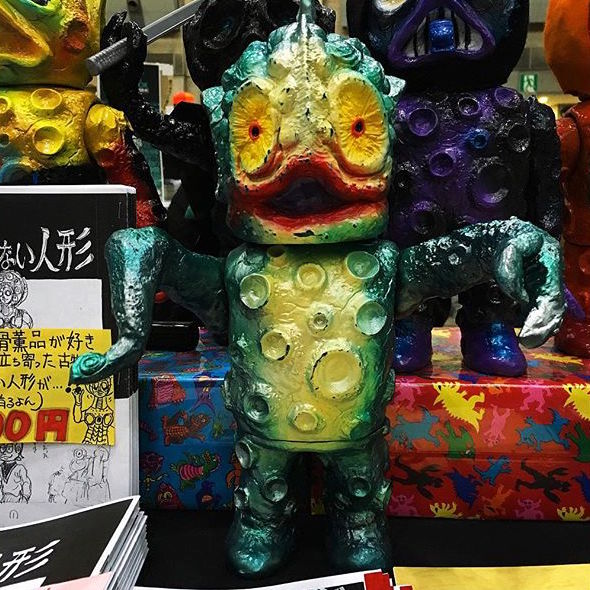 Still proving hugely popular in Japan and just as elusive  as ever to obtain in the West, Longneck/Cosmo Knight Alpha‘s Maijin series is set to receive a new entrant soon in the form of the fine looking chap you see above! Whilst the original Yusei Maijin featured a design inspired by Ooze-It knockoff, Cosmos Alien A, this new iteration appears to be inspired by the vintage gacha series’ Alien B, featuring a similar “fish” shaped head seen in the recent Medicom Toy re-release (check it here). Revealed in prototype form at the recent Comiket convention in Tokyo, we’ll be keeping our fingers that we see more of the figure very soon…

Teased here just yesterday, we can now reveal the Disarticulators x Longneck Oozeball sofubi micro-run in full! Designed by Tru:Tek and sculpted by Zectron, the 3″ Ooze-It/Madball tribute has been produced in a standard “hard” soft vinyl this time around, limited to an edition of 10 – 5 in flesh and 5 in GID – that have been painted by Longneck’s Yoda-san in colorways inspired by his early Yusei Maijin paint apps. Packed in resealable bags with custom hand drawn and colored header cards, the Longneck Oozeballs will be dropping at Rampage Studios‘ “Clash of the Titans” show this Friday, June 26th for an undisclosed sum… Here’s hoping a couple make it online soon after!