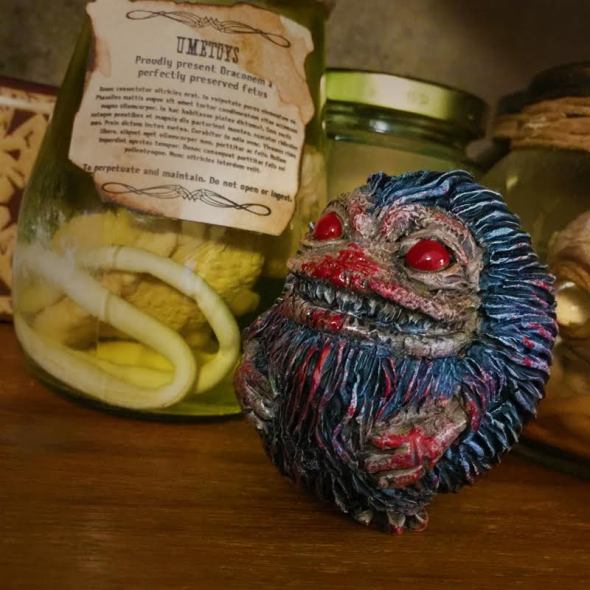 Since the “Marble Madness” Lucky Bag drop last week, we’ve had a number of enquiries as to whether the “Critters Inspired” mini figure will ever receive another “single” release… Well fear not, as the little guy will be making his next standalone appearance as part of a Gory Hole exclusive very soon! Designed and sculpted by Zectron with production duties handed over to our very own Tru:Tek, these black/grey marbled “Shocker” Crites will be dropping alongside the very first issue of the long-awaited Gory Hole ‘zine at the end of the month. Pricing and edition size are still to be confirmed at present, but it’s likely that the little guys will be bundled with a copy of the publication for around $25 each… Stay tuned for more information in the coming weeks!

With Nevermore Pictures attempting to revive cult 80’s classic Critters with their recently announced fan film Critters 3D, both Retroband and Worthy Enemies have jumped on board to help kickstart the project with an exclusive action figure released based on the furry little beasts! Coming in at around 1:18 scale, the 2″ tall resin figures have been sculpted, cast and painted by Retroband, with custom handmade card backers featuring art from Worthy Enemies. Currently available via preorder in the Nevermore store ahead of of the film’s upcoming Kickstarter campaign, the figure can be yours for $125 plus shipping… But that’s not all! As a little incentive to purchase early, the guys will also be offering up an exclusive 10″x15″ glossy poster and 8″ die cut sticker! That not enough for you?! Then you’ll be pleased to know that the first 50 people to snag the figure will also be entered into a lottery to win a companion “Bounty Hunter” figure too- more on him soon! Interested parties can head over to the Nevermore Pictures site here to find out a little more about the project… 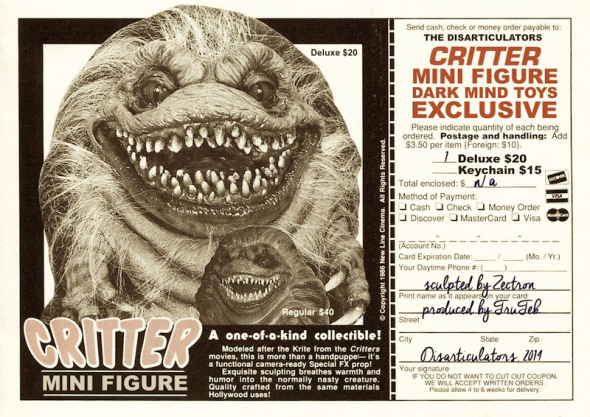 Teased earlier in the month, we are very proud to finally reveal full details of the first exclusive from newly established indie toy retailer Dark Mind Toys… a fresh batch of the Disarticulators‘ Critters-inspired mini figure! Designed and sculpted by Zectron and produced in a keshi-style rubber courtesy of Tru:Tek, the 1″ tall figures have been cast in a gorgeous thermal color-changing purple-blue pigment this time around, with a total of 13 up for grabs; 8 in a deep “eggplant” and 5 in a light “lavender”, each coming packed with an all-new custom header designed by Tru:Tek (pictured above), plus free stickers from DMT owner, Zombiethulhu. Touching down in the new store on Thursday, May 29th at 1pm EST, the Crites have been priced at just $20 each plus shipping… Expect news of more releases, including the debut of Zombiethulu’s own mini figures, over the coming weeks! 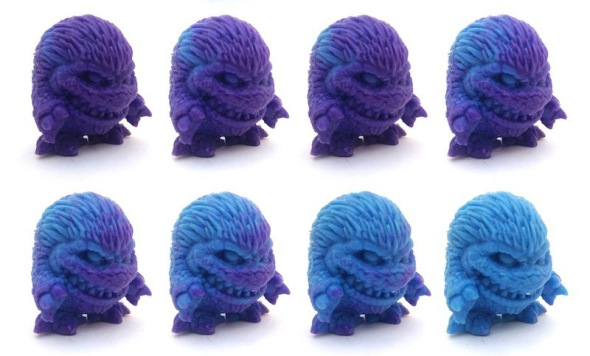 Celebrating the launch of new online indie toy retailer Dark Mind Toys (URL to come!), owner Tim MacBride aka Zombiethulhu is proud to present the first exclusive that’ll be touching down soon… a fresh batch of the Disarticulators‘ Critter mini figure! Designed and sculpted by Zectron and produced in a keshi-style rubber courtesy of Tru:Tek, the 1″ tall figures have been cast in a gorgeous thermal color-changing purple-blue pigment this time around, with a total of 13 up for grabs; 8 in a deep “eggplant” and 5 in a light “lavender”, each coming packed with an all-new custom header designed by Tru:Tek (pictured above). Due to be heading to the store over the next couple of weeks alongside a few other undisclosed toys, keep a close eye on the Zombiethulhu IG feed here for the full lowdown soon…

One Critter release not enough to quench your thirst? Then you’ll be glad to know that a new “Nano” version will be touching down in the Man-E-Toys store over the next few weeks. Reduced to a quarter of the original’s size at just 11mm tall, these tiny little guys are due to be released in “blind bagged” packs of 5- each coming encased in a fizzy, water soluble egg! Pricing and edition size is still be be confirmed, so be sure to check back regularly for more info over the next month…

Continuing our post-NYCC coverage, we’re proud to reveal that Clutter are the latest to get their remaining exclusives up online! Featuring a diverse selection of plush, resin and vinyl releases from both the Clutter NYCC booth and the DTA’s, favourites of ours include Hollow Shells’ purple Yowl, Jeff Lamm’s pink/silver Greasebat Gummi set, the Beast Brothers’ one-off Calaverita, plus of course the Critters, Deka Manzillas (feat Nama Niku) and “Ultimate” sets from our very own Disarticulators! Interested parties are going to need to head over quick to avoid disappointment, as stock doesn’t seem to be hanging around for long! 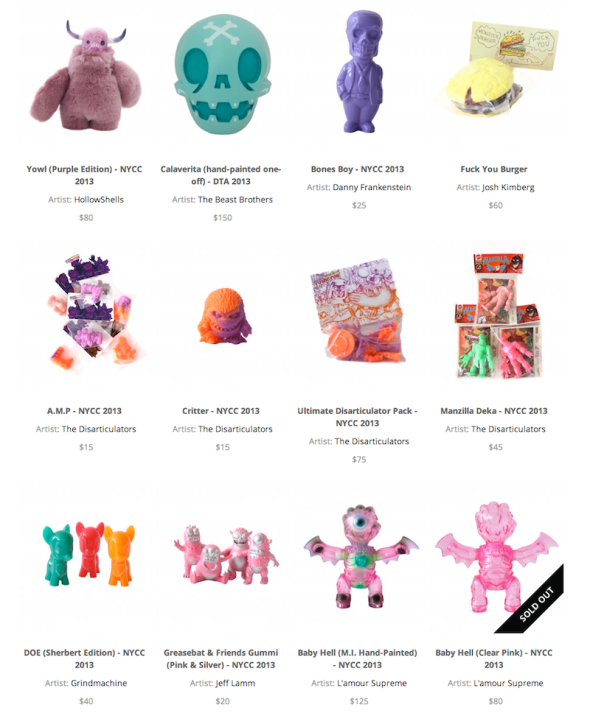 NYCC exclusive Critter- Designed and sculpted by Zectron, these have been cast in a marble orange/purple urethane rubber by Tru:Tek. Limited to just 10, each comes  bagged with an exclusive header for just $15 a piece.

NYCC exclusive A.M.P- The western debut of Meadowknight’s new mini figure series, the group of 4 designs have been cast by Tru:Tek in a mix of orange, purple and flesh rubber. Sold blind bag, the little guys have been priced at $15 each.

Deka Manzilla- One of the ONLY times this figure will ever be available publicly, Deka Manzilla was conceived/kit-bashed by Nama Niku, coming cast by Tru:Tek in a variety of solid and marbled neon rubber. Featuring double postcard packaging from none other than Ralph Niese, the figure has been limited to just 12 pieces at $45 each.

NYCC exclusive Ultimate Disarticulator pack- Missed the August sale? Then you’ll be glad to know that ALL 3 of our original lines are back in one huge package! Featuring Kesh-E-Face, Beardfist and the Tiny Terrors set, all have been cast by Tru:Tek in a marble orange/purple rubber for this release. Totalling around $100 worth of rubber, the beautifully packaged set runs at a discounted price of just $75. Limited to 3…

Whilst the Disarticulator Made2Order sale still rages on in the Man-E-Toys store, we thought we’d share a ‘tiny’ project we’ll be dropping soon after… presenting the Micro Critters! Utilising the insanely popular Crite-inspired sculpt from our very own Zectron, the little guy has been cast in a water-based shrinking material, resulting in a perfect copy, only half the size of the original! Fitted with mini keychains, the figures will be the first to come cast in our new rubber formula- so expect a flurry of clear, marble and solid colourways in the near future… The pictured prototypes will be making their way randomly into packages throughout the August Made2Order sale, so if you fancy your chances, head over to the store and bag something now!