Opening last Saturday at Sacramento’s premier toy/art gallery Dragatomi, “And I’d Like to Thank…” is the latest solo show by popular character illustrator Philip Lumbang. The LA based artist has gained a strong reputation through his cute yet mischievious animal creations in recent years, working with the likes of OBEY Giant’s Studio Number One, but it’s his signature bear characters (named ‘awesome bears’ by Philip’s loyal fans) that have really propelled his work to cult status.

His latest exhibition features a series of paintings depicting the adorable bear as a number of pop culture icons, including Darth Maul, Yoda, Venom, and the Power Rangers. Created on 9″ x 12″ solid wood boards, using a mixture of acrylic and enamel paints, Lumbang has priced the pieces between $300 – $600 (almost affordable to us mere mortals!), with the 20 strong series available through Dragatomi after the event. Check out the link here to view an online catalog of the work, featuring prices and dimensions of all the paintings.

Sillof’s Workshop: Re-imagining Your Childhood Since 1999

Whilst writing our recent feature on Peter Goral’s “Killer Bootlegs” and the newly emerging bootleg toy scene, we stumbled upon the amazing works of American modeller, Sillof. Although not a bootlegger in the same vein as Goral or the Sucklord, Sillof’s customs of well known iconic action figures (primarily from Kenner’s vintage Star Wars line) take the art to a whole new level.

Opening his studio (originally called the Wookie’s Workshop) way back in 1999, Sillof has worked on several custom toy projects, exhibiting at the likes of the Star Wars Celebrations events, Toyfare and SW Insider. Primarily focused on reinterpretations of classic figures , he has also worked on numerous props, costumes and sets for a string of independent films and conventions.

Each of Sillof’s one-off toy lines feature a particular theme; Whether it be Steam Wars’ steam punk aesthetic, Serial Wars’ Buck Rogers/Flash Gordon influence, or Gaslight Justice League’s 19th century design, each and every creation has been made with a level of detail and considered research that blows the competition out of the water. Unfortunately the custom toy designer has no plans to sell his work at the moment, but anyone interested in checking out further images (including designs for Adult Swim’s Venture Boys, and reinterpretations of both Dune and Hellboy) should click here.

Featuring the main cast from Star Wars, the Samurai Wars line borrows heavily from the aesthetic of Akira Kurosawa’s famous samurai films from the middle of the last century. Sillof’s Chewbacca (renamed Chikushou and re-imagined as a frightening Oni demon) and Boba Fett (renamed Fetababe, a cunning ninja) are two of the series’ most successful figures, perfectly transferring the characteristics and personalities of the original characters. 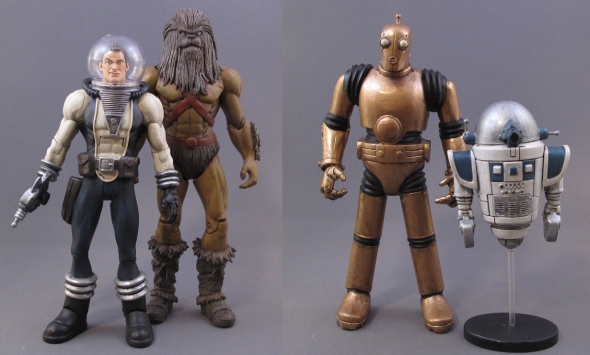 Influenced by the sci-fi serials of the 1940’s including Buck Rogers and Lost in Space, Serial Wars takes their bold, futuristic lines and applies them to the Star Wars universe. Over exaggerated muscles, chiseled jaw lines, laser guns and fish tank helmets combine to form one of Sillof’s most technically accomplished series to date.

Sillof has often featured WW2 themes throughout his work, but it’s the beautifully created World Wars series that has gained most notoriety. Working alongside fellow custom designer Glorbes, the line took 2 years on and off to finish, with their Battle Droid Mk C3 (C3P0) and Mk D2 (R2D2) being finished to a particularly high standard.

Not all of Sillof’s creations feature Star Wars characters, his Gaslight Justice League line features all of the original JL comic’s heroes and villains, faithfully recreated in the style of the graphic novel “Gotham by Gaslight”. Adhering to the story’s Victorian setting, this was Sillof’s first attempt at re-imagining the 1800’s aesthetic in his work.

Collaborating with various artists and illustrators, Sillof has created numerous paintings based on his  custom work, including the promotional posters for both Samurai Wars (Otis Frampton) and Steam Wars (Rodolforever) seen here. Check Sillof’s site for an extensive collection of their art.