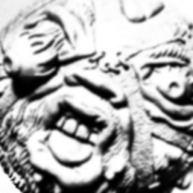 Joining the new wave of similarly themed patches that have just touched down in his store, Grizlli Atom is proud to reveal the first of a series of figures inspired by infamous wrestlers of the 80s and 90s! Whilst we have very little info to go on at present (even the name is still to be decided!), we can confirm that the piece has been directly inspired by James Groman’s cult classics the Madballs, featuring a two-sided head that resembles the one and only “Baby Bull”, Big Van Vader. Designed by Grizlli with the aid of CheapPopShop, sculpted by Macsorro and currently undergoing keshi-style production courtesy of our very own Tru:Tek, interested parties won’t have long to wait until they’ll be able to get there hands on these beauties… More news on the first release as soon as we have something confirmed! 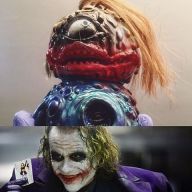 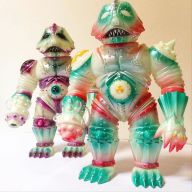 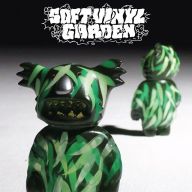 Toy collector-come-curator Jack Shaw is proud to announce that his first ever Soft Vinyl Garden group show will be touching down at the Rooftop Bar and Cinema in Melbourne, Australia this evening! Featuring a whole slew of the soft vinyl toy scene’s most prominent players, highlights include a pair of one-off GID DC13’s from Mutant Vinyl Hardcore, a pre-release version of Leeeee Toy’s EARTHLY, a Dark Knight “Joker” Mimi Monster from TAN, plus a one-off Oozeball and Warui Zonbi set from our very own Tru:Tek. Opening to view throughout the day, those looking to pick something up will need to make sure they arrive at 7.30pm for the start of sales… Look out for pics from the event later this week! 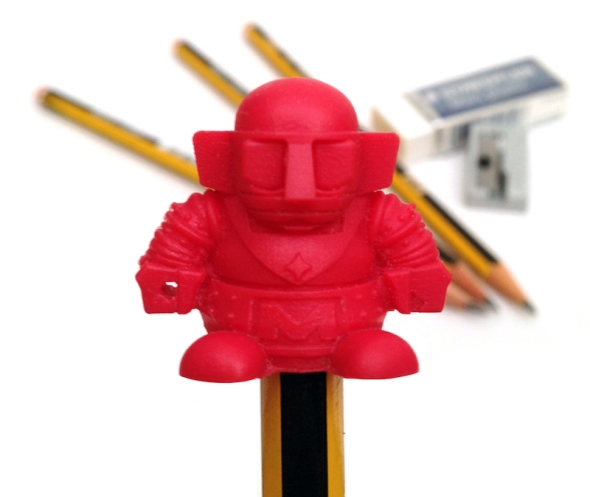 After months on the drawing board, we can finally reveal the latest figure in Awesome Toy‘s ongoing Artist Collection series… the “Super Deformed” Fake Baron keshi from our very own Tru:Tek and the Disart ToyLabs! Designed by Tru:Tek to fit in with the standard vintage SD super bot keshi, the little guy has been 3D sculpted in-scale by Brownoize at little under 1″ tall, coming hand cast in an authentic keshi-style urethane rubber. Available with 2 initial buying options, we have a 3-pack produced in the super ‘bot’s classic red/yellow/blue and a special singular version, again coming in red but fitted with a pencil-sized hole in the bottom. Both coming packed in a gacha capsule with an insert designed by Tru:Tek with artwork from Rich Sheehan, the 3-pack and pencil topper can currently be found in the Toy Underground store right here for just $15 and $7 respectively… Look out for news on a Disart ToyLabs exclusive version very soon!

Michael Devera over at Obsessed Panda has joined forces with the Disarticulators for the first of 2 micro-runs based on the ever-popular Oozeball sofubi! Inspired by Marvel super villain Thanos, the Ooze-It style ball has been produced in a non-squishy soft vinyl this time around, coming with a swathe of blue and purple sprays, gold brushed detailing, plus the piece de resistance- jewel encrusted craters that mimic the Titan’s infamous Infinity Guantlet! Limited to an edition of just 5 pieces, the Thanos Oozeballs will be touching down in the OP store today (3/14) at 12pm Pacific time for $100 each plus shipping… Look out for word on the next run very soon!

Hot on the heels of the recent VVC exclusive release (details of which can be found right here), fellow Hong Kong-based retailer Angel Abby has teased their very own Oozeball release set to drop soon! Coming in at little over 3″ wide, the Tru:Tek-designed, Zectron-sculpted homage to both Ooze-It and Madballs has been produced in a flesh-toned soft vinyl this time around, limited to 20 that will be split up into 2 colorways hand painted by Angel Abby’s Andy. Due to go on sale over the next couple of weeks, be sure to stay tuned for a full reveal plus release details very soon… 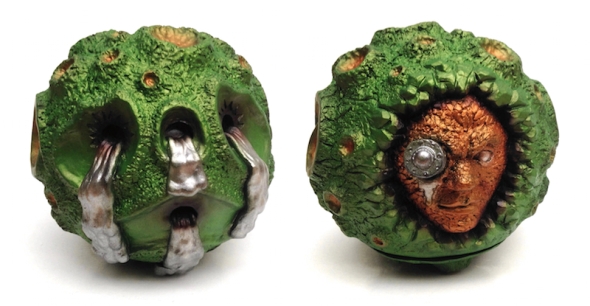 In celebration of the new Softoy Hobby site and store, our editor-in-chief Tru:Tek will be offering up a number of one-off Oozeballs over the next couple of months… starting with the metallic marvel you see above! Produced in a squishy black soft vinyl, the Tru:Tek-designed, Zectron-sculpted piece has been treated to gorgeous green-gold, copper, silver and metallic plum sprays with a protective matt clear coat. Currently residing in the Softoy Hobby store right here, the piece will set you back just $80 plus shipping…

The Disarticulators have revealed that they will be teaming up with long time collaborator Rampage Toys for the release of the FINAL squeaky blank Oozeball… the “Cheezy Moon” edition! Having seen over 20 releases across 9 different colorways throughout the past 12 months since it’s debut, the balls designer – our very own editor, Tru:Tek – has decided to lay the figure to rest for the time being to focus on upcoming Gory Hole releases- so whilst you can expect the odd painted release, one-offs and the odd marbled release, this will be the very last time a squishy, squeaker fitted edition will be available at retail. Cast in a “moon cheese” yellow super-soft sofubi, expect to see the “Cheezy Moon” Oozeball in the Rampage Toys store via open preorder next week for around $40-$50 plus shipping. We’re told the ordering window will be open through the New Year festivities for all your post-holiday buying pleasure… Look out for an exact drop date and price over the next few days!