Following our visit to the HMQ (Heavy Metal Qee) custom show earlier in the week (here), we couldn’t resist popping down again on Thursday night to catch up with a few of the show’s featured artists. Whilst we weren’t able to stay for long, one man we did manage to speak to was custom legend, Jon Paul Kaiser. Letting slip that he’s currently planning a full time leap into toys soon, we can only imagine what this is going to mean for his already steady output of production and custom pieces- world domination?!! His entry, “Untitled”, was inspired by Nottingham based sludgecore metal group Iron Monkey, featuring the same engaging mix of hand drawn detailing and meticulous brush work that we’ve come to expect from JPK’s unique b/w style- a truly stand out piece that stayed true to the Qee design… 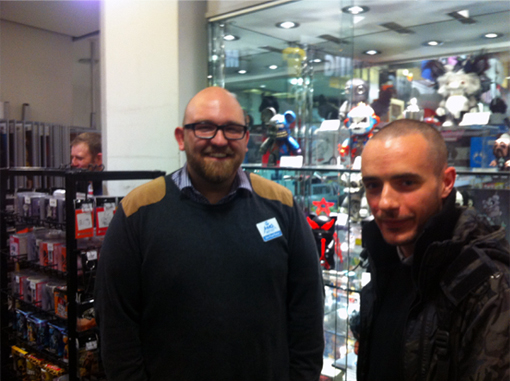 One of our favourite “how did they do that?!” pieces from the show (believe me, there was a few!) was Mark Treharne‘s “Brainstorm”, so it came with great pleasure to get a chance to speak with the man himself about the custom’s creation. Funnily enough, the intricate grey dome head piece was originally a rubber dog toy before Mark added LED lit tubes, a Toyer incrusted pod and VR visor! Mounted on a smooth grey platform with a sparkling blue inlay, Mark’s minimal choice of colours really help to bring the custom’s production qualities to the forefront. A Design Technology teacher by day, Mark mentioned that he is also currently working on a custom toy after-school club for his pupils (boy, I wish he had been at my school!).

Creator of the beautifully sculpted “Acetone to the Bone” (the red, 3 eyed satanic dog creature!), P J Constable was the youngest entrant to the HMQ show at only 15. Anyone interested in seeing more of his work will be interested to know that he will be exhibiting a piece at the upcoming Flatties “Dragon” show on Saturday, August 18th at 6pm at The Sho Gallery in Cardiff. Check his site here for more details… 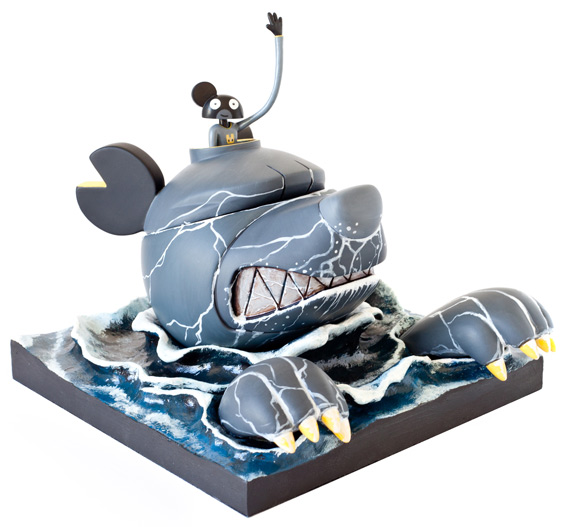 Whilst the show sadly closed on Thursday night, anyone interested in grabbing their favourite piece will be glad to know that the 30 heavy metal infused customs are available from the Fugi.me store now. With prices starting at £30 for Fordybo’s “Mortimer”, and going all the way up to £1,400 for Lunartik‘s monumental “Waves” Knucklebear custom (pictured above), there’s a piece suitable for all budgets. Anyone interested should head over to the store quick, as many of the customs are finding new homes already…

On passing through Covent Garden yesterday we couldn’t resist taking a quick diversion to Forbidden Planet to check out the newly opened HMQ (Heavy Metal Qee) Custom Show, and boy are we glad that we did! With a staggering 30 of the UK’s finest artists on board, each and every custom proved to be a winner; from Lunartik’s Hokusai inspired ‘Waves’ Knuckle Bear, to Robotic Industries’ meticulously recreated ‘Marshall’ amp, each interpretation took the heavy metal theme to a new and imaginative place. With the show running for another 2 days, be sure to head down for the close on Thursday (April 19th) at 6pm, where 22 of the featured artists will be on hand to talk toys, and more importantly, sign HMQ show books (read more here)!

Check out all of the featured designs pictured below (advance apologies for the amateur photography!)… 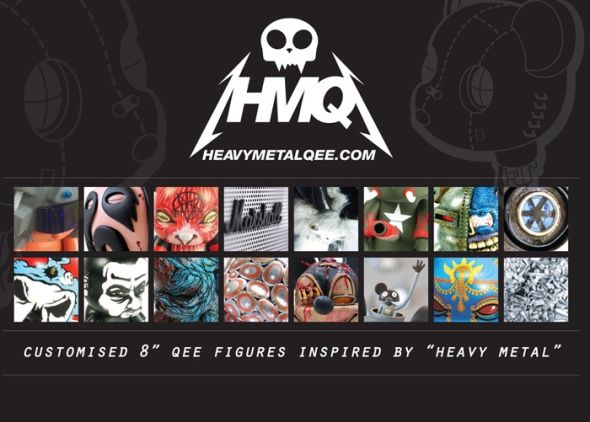 Nearly 2 years in the making, the HMQ (Heavy Metal Qee) Custom Show will finally be opening it’s doors this Thursday (April 12th) at London’s Forbidden Planet Megastore. Featuring 30 heavy metal inspired pieces from some of the UK scene’s most prolific artists including A Little Stranger, Hoakser, Lunartik, Penny Taylor (Taylored Curiosities), RunDMB and Sneaky Raccoon, the exhibition is set to run for one week only, with a special ‘meet the artists’ session planned for the close on April 19th (6pm).

To celebrate the long awaited event, show curators Fugi.me have prepared an extensive 64 page companion art book. Featuring a 2 page spread dedicated to each artists creation, the beautifully designed book features full colour photographs and information about each artist and their masterpiece. Due to go on sale in-store at Forbidden Planet, and online at fugi.me from April 12th, the HMQ book will retail for just £14.99. Check out the recently updated HMQ gallery here for a look at some preview spreads…

The show features around 20 custom Eeerz from over 10 established low-brow artists/toy designers including Pete Fowler, Triclops Studio, Skwak, and TTFiles favourite, Lunartik- all of which will be available for purchase at the end of the tour through Forbidden Planet’s web store here.

The opening night saw all of the artist’s presenting their pieces, signing autographs and creating one off artworks for attendees of the show, whilst Lunartik was on call to offer guests workshops on customising their own Eeerz toy. Unfortunately we were unable to attend on Friday, but we were able to take a look yesterday at the amazing collection- check out the photos below for some of our favourites- 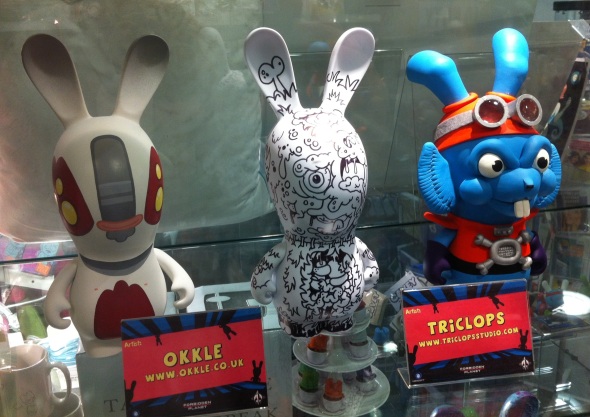 The Eeerz blank DIY custom toy is available to buy now from all Forbidden Planet outlets, priced at £34.99 each. Limited multi-coloured flocked Eeerz (pictured) are also available through their flagship London store for £59.99.

Check Forbidden Planet’s event blog here for more information, the show will be running until the end of the month.