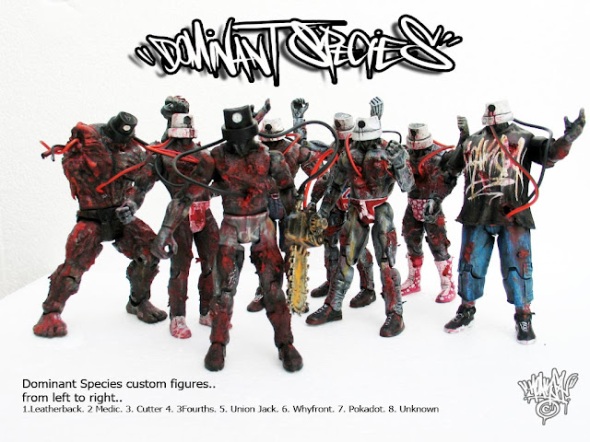 Swiftly following the reveal of the latest batch of Gundam Graff Bombers, UK based graffiti artist Hoakser is proud to announce 3 new additions to the Dominant Species family, The Medic, Three Fourths, and Calvin ‘The Cutter’ Klein. As with previous figures in the series, this trio of cyborg urban alchemists have been created through hours of painstaking modification, sculpting and painting. Standing at around 16cm tall, the fully articulated ex-wrestlers will be available alongside the other 5 Dominant Species from Hoakser’s eBay store later today, with prices starting from just £40 plus shipping. Click through to the Hoakser blog for more information…

The Medic// Even though (the Dominant Species) feel no pain, and have limbs that grow back, they are prone to catching colds from late night painting in all weathers.. The medic is on stand by to unblock any bunged up nozzles or severed flow tubes..

Three Fourths// He’s lucky number 7, the seventh member dedicated to an art form starting with the seventh letter..And what does 3 + 4 make?