Following months of custom releases, one-offs and painted artist runs, the hugely popular Jinmenken sofubi from Awesome Toy is now finally up for grabs in its first official factory-painted release! Featuring both “Human” and “Skull” head designs, the super-creepy canines have been produced in a GID soft vinyl with simple red/blue sprays inspired by the classic “Nipper the Dog” sofubi toy. Currently up for grabs via Toy Underground right here, both Human and Skull Jinmenkens have been priced at just $90 each…

As promised in our coverage of the “Amazing Fake Baron” over the weekend, we can now bring you details of Awesome Toy‘s latest release, the “Tokyo” Jinmenken sofubi! Featuring both “Human Face” and “Skull” designs this time around, the 8″ tall, 2-part homage to one of Japan’s creepiest urban legends has been produced in a bright yellow soft vinyl this time around, coming with hand threaded hair as well as neon green, orange, black and silver Tokyo-style sprays inspired by Bullmark’s classic 70’s Hedorah colorway. Limited to just 10 pieces in each design, the “Tokyo” Jinmenken are currently up for grabs via 24 hour lottery, priced at $100 each plus shipping. Anyone wishing to try their luck are going to need to fire over an e-mail to sales.awesometoy@gmail.com with “NYCC JINMENKEN” as the subject, being sure to include their full name, address and PayPal address… Good luck to all who enter!

Science Patrol is the latest artist to interpret the infamous “Human Face Dog” of Japanese urban legend, proudly presenting the Hooded Jinmenken sofubi minis! A ingenious mash-up of SP’s Trunkie and Elemental Mage figures, the super-cute canines appear to have been cast in a black soft vinyl for their first release, coming in a choice of red, grey and gold colorways. Debuting at Superfestival 69 on Sunday, September 27th, here’s hoping a few make it online soon after…

With New York Comic Con ’15 just a few weeks away now, KaijuMonsteR have very kindly shared one of the many, many exclusives they’ll have up for grabs at their booth, proudly presenting the Jinmenken set! Coming from elusive sofubi producer K.K, the highly sought after pair – the Man and Woman Faced Dog – have been produced in a deep teal soft vinyl this time around, coming complete with eye-catching yellow, red and silver sprays. Up for grabs at the KM booth (#406) from Thursday, October 8th, pricing and edition size for the set is still to be confirmed… Stay tuned for more NYCC exclusives from the team soon! 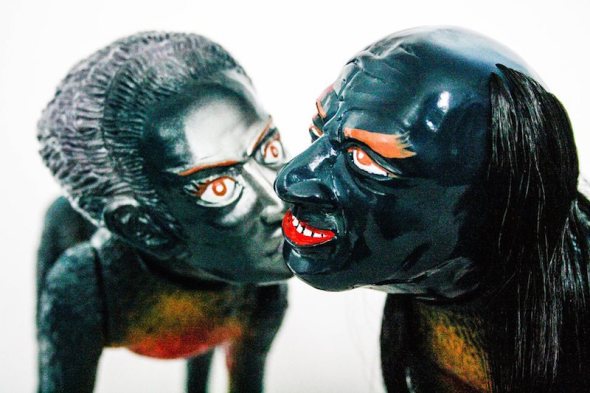