Daniel Smith aka Turbopistola has just revamped his online store with a whole slew of new items! Featuring a number of leftovers from DCon including the “Gold Edition” Elephantos, Mania Balls, pins, patches, stickers and shirts, these are joined by a swathe of Ion Men customs, including our personal favourites, the decal sporting Microman inspired creations you see above. All priced between just $5-$25 plus shipping, we suggest heading on over to the store and bagging some swag before it all quickly disappears…

Joining the slew of artists announced yesterday as part of Nerd City‘s huge C2E2 booth this weekend, Daniel Smith aka Turbopistola has revealed a number of releases he’ll have up for grabs at the event. As well as a number of AP Cuddlehards, paintings and customs, Daniel will be bringing along a limited edition of 6 exclusive C2E2 Ion Men in a mix of red and clear black vinyl for $20 each, as well as 6 C2E2 Elephantos figures coming in a rusted red paint app for $25 each. Unable to attend the con? Then you’ll be glad to know that Daniel will also have a limited number of the C2E2 Elephantos in his store for the duration of the event!

Daniel Smith aka Turbopistola is proud to reveal that he’ll have a selection of new Ion Men customs up for grabs later on today (3/27)! Produced in Daniel’s exclusive “clear smoke” soft vinyl, the 5″ tall bots have been adorned with a number of new originally sculpted parts, including an alternative arm, ooze foot, articulated tentacles and removable weapons. Coming complete with a number of metal embellishments as well as different cape and cowl types, the limited run of just 5 figures have each been packed in a resealable bag with a header that can be hung for display. Touching down in the Turbopistola store tonight at 9.30pm Eastern time, the custom Ion Men have been priced between $40-$50 each plus shipping…

Lulubell Toys have just revealed that a fresh shipment of Any Old Ion‘s Ion Men sofubi are now up for grabs online! Available in 3 exclusive colourways this time around; the pictured clear with chest insert, a sparkle clear pink and mixed part blue/black, the 4.5″ tall soft vinyl bots come blind bagged, with a total of  8 different heads, 2 bodies, 2 pairs of legs and 5 sets of arms thrown into the mix. Available in super-limited quantities through the Lulubell store right here, the Ion Men come bagged and headed for just $20 each plus shipping… 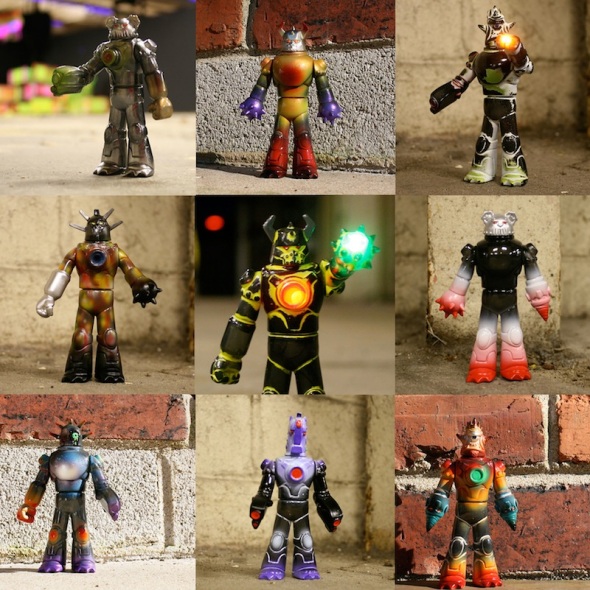 Daniel Smith aka turboPISTOLA is proud to present his first run of Ion Men customs! Utilising his sleek clear black artist proof colourway, a total of 12 unique builds have been created for the release, with the 5″ tall sofubi ‘bots coming with a number of different finishes including beautiful sprayed fades, contrasting rubs and tight hand painted detailing. But that’s not all! On top of the awesome paint work, a number of the figures have also been fitted with switched LED units! Easily turned on and off with a little press of the pelvis, the mixed colour lights have been fitted to the end of the arms for an uber-cool laser effect. Due to touch down in the turboPISTOLA store today (12/4) at 9pm Eastern time, all 12 customs have been priced at a wallet friendly $30 plus shipping…

Any Old Ion have teamed up with Toy Art Gallery for a Designer Con exclusive run of Ion Men! Available in two different colourways; a mixed part, unpainted ivory/black and a graphite sprayed blue with red vinyl cape, the modular soft vinyl figures have been limited to just 10 of each. Priced at an estimated $25 a piece, the little guys will be available at the TAG booth (#215) from 9am this Saturday, November 9th… Unable to attend the event, but still want an Ion Men fix? Then you’ll be glad to know that both standard and REMIX build artist proofs are still available from the Turbopistola store right here.

Hot off the heals of last week’s artist proof drop, Turbopistola proudly presents ION MEN: REMIX EDITION VOL.1! Unlike the previous release, this line up of figures are ALL one-off builds that really push the level of playability in the modular sofubi line. Consisting of a total of 6 off-the-wall creations, each cast in Turbopistola’s exclusive clear black, the soft vinyl figures have been priced between $25-$40 plus shipping. Heading to the artist’s online store tonight (10/28) at 9pm Eastern time, we suggest setting your alarms to avoid any disappointment- these particular builds will never be offered up again!