Greg Rivera over at Mishka is proud to reveal that the Ghost Cave‘s Cyco Ape sofubi will be returning for a special “blank” release this month! Designed by Lamour Supreme and sculpted by Atomic Vomit, the dual-headed primate stands at a lofty 13″ tall, coming with articulation in arms, feet and necks. Produced in an unpainted light blue soft vinyl and packed with a header card designed by Johnny Ryan (TBC), the Cyco Ape will presumably go on sale through the Ghost Cave store for around $150 soon… Keep track of Greg’s Instagram feed here for the full lowdown! 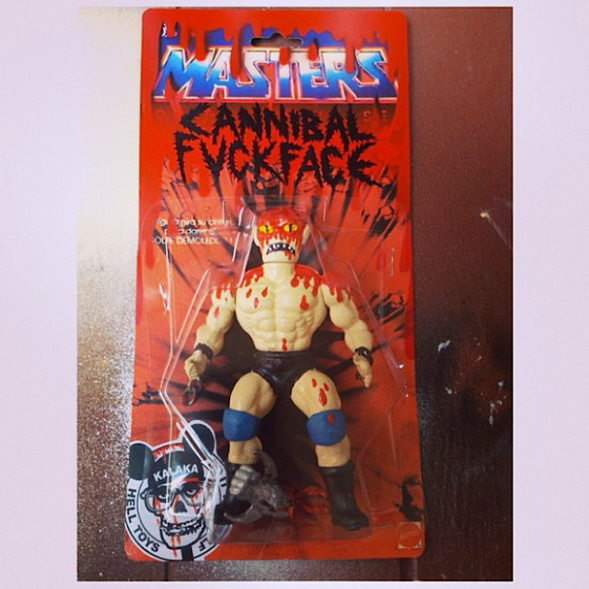 With Johnny Ryan’s Prison Pit finally getting its own official Instagram account (here) earlier this week, mad bootleg scientist Matias over at Kalaka Toys has decided to honour the occasion with a custom of the graphic novel-turned-cartoon’s lead protagonist, Cannibal Fuckface! Utilising a classic 5.5″ MOTU-style action figure as a base, the artist has painted the buck in an authentic mix of flesh, black, blue and blood-splattered crimson acrylics. Finished off with detachable metal wrist chains and fist-blade accessory, the post-apocalyptic man eater has been safely housed on a vintage MOTU blister pack, featuring additional hand painted modifications from Matias himself. Unfortunately we can’t confirm whether the figure will ever see a proper release at present, but you can be sure that as soon as we find out, you guys will be the first to know…

Monster Worship are pulling out all the stops for SDCC 14, proudly presenting yet another staggering line-up of exclusives for this year’s event! Due to be touching down at the Lulubell Toys booth (#5047) between 4pm-6pm, with early tickets available at 3.30pm, we bring you a quick rundown of the whole host of goodies that’ll be up for grabs…

“UnMellow Yellow” Cannibal Fuckface- Standing at approx. 7.5″ tall with 4 points of articulation, the Johnny Ryan designed and Monster 5 sculpted figure has been produced in an unpainted yellow soft vinyl this time around. Coming complete with slorge accessory, CF will be available in “too rare” quantities, priced at $75 a piece.

Micro Greasebat- Jeff Lamm’s sofubi micros return for SDCC in both unpainted glow and slime green soft vinyl! Sculpted once again by Monster5, these little guys stand at just 1.5″ tall, coming in at $15 each.

“UnMellow Yellow” Rottweiler Herpes- Joining CF, Johnny Ryan’s Rottweiler Herpes is also set to receive a super-limited run in unpainted yellow vinyl. Standing at approx. 8″ tall and coming with 3 points of articulation, the figures will be available for $75 each.

“Slime Thing” Slimebat- A tribute to everybody’s favourite Bio-Glow plant-like entity toy from Kenner in the early 90’s, Slime Thing Slimebat from Michael Skattum and Monster Worship has been cast in bio-glow vinyl with green, gold, and red spray paint accents. Standing at approx. 5.5″ tall and coming with 1 point of articulation, the figure has been priced at $50.

“Steel City” Galaxy People- Monster Worship will be teaming up with their friends in Japan, Galaxy People, to offer a three piece set featuring the heroes of the GP universe; Helios, The Grappler and Meklops. Cast in yellow japanese soft vinyl, with black and silver paint accents, MW’s signature colorway, the figures have been priced at $25 and $75 for the set.

???- On top of all the above, Monster Worship will also be offering up a number of one-offs and other “misc thingies”- keep track of the MW Instagram feed here for reveals closer to the event!

Joining a whole host of exclusive figures including the previously posted GID CANNIBAL FUCKFACE and ROTWEILER HERPES, Monster Worship will be unveiling 2 all new figures… the Mini Greasebat and Thee Black Heksen! An adorable 4″ interpretation of Jeff Lamm’s highly popular creature of the night, the Mini Greasebat has once again been sculpted by the mighty Chauskoskis, coming cast in a soft Japanese vinyl with one point of articulation. NYCC will see the launch of an exclusive unpainted “Black” edition, and whilst news on price and availability are still forthcoming, we can guarantee these little beauties won’t be around for long… Roll on the first painted edition! Joining Mini Greasebat, Monster Worship will also be revealing their latest collaboration with artist Dwid Hellion, Thee Black Heksen. Standing at an impressive 7″ tall and coming with eight points of articulation, the momentous Hellion designed beast has been sculpted by MW regular Monster 5, coming cast in an NYCC exclusive unpainted “Black”. Stay tuned for more Monster Worship exclusives very soon! 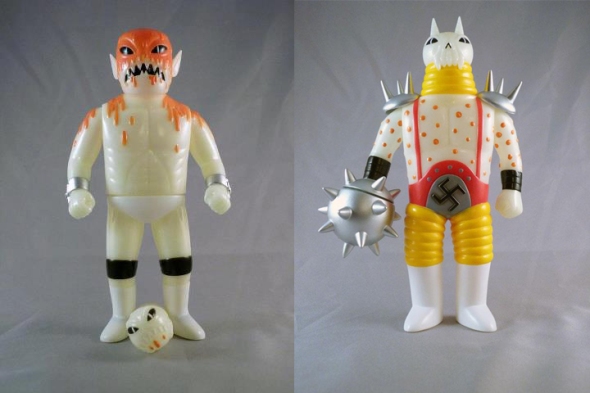 Next week’s New York Comic Con will see the release of Johnny Ryan‘s twisted CANNIBAL FUCKFACE and ROTWEILER HERPES in an exclusive glow-in-the-dark edition… Produced by MonsterWorship, the pair will be available in extremely limited numbers alongside a whole host of other MW goodies. No news on availability or pricing as of yet, so be sure to keep checking the MonsterWorship blog here for further developments closer to the event… 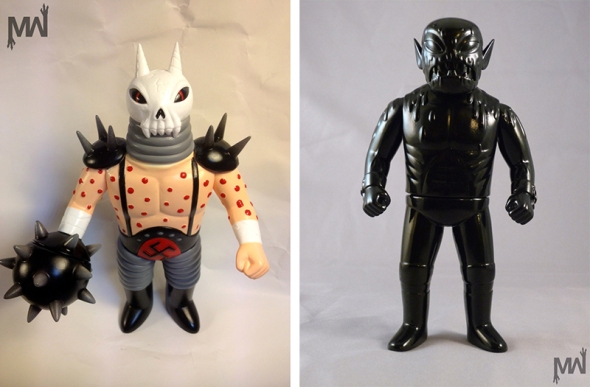 Teaming up with Dragatomi for this year’s SDCC, Monster Worship have revealed a huge selection of new colourways and editions for their full range of sofubi, plus the long awaited debut of Johnny Ryan’s latest monstrosity… Rottweiler Herpes! Available at the Dragatomi booth (#4935) for just 2 hours on Friday, July 13th between 11am-11pm, Monster Worship will be announcing a ticket system for purchasing on their site soon. Anything left over will be heading to the MW store on Tuesday, July 17 at 6pm EST. Here’s a quick rundown of what will be on offer…

Altar Beast “Kluh” edition// The SDCC 2012 edition of Altar Beast has cast in green vinyl with purple, green, white, and grey accents. Stands approx. 6″ tall with one point of articulation, the Japanese made vinyl figure will be available alongside a limited number of Altar Beast one-offs for just $45.

TBA Greasebat// Not much can be said about the latest iteration of Jeff Lamm’s signature creation, as colourways are due to be released on the day. Standing at 7″ tall, the Chauskoskis sculpted beast will be available for $85… Stay tuned for a full reveal next week!

TBA Kusogon// As with Greasebat, Monster Worship are holding back details on beaK’s latest Kusogon until next Friday… To be joined by a selection of Kusogon hand paints, pricing and edition sizes are still to be revealed.

Rottweiler Herpes// Joining Cannibal Fuckface comes the latest creation from the warped mind of Johnny Ryan, Rottweiler Herpes! Coming in an SDCC exclusive OG colourway, RH stands approx. 8″ tall with 3 points of articulation. Sculpted by Monster5 and produced by Monster Worship, the figure is set to retail for $85 each…