As promised in our coverage of the one-off marbled Screwballs last week, we’re proud to present one last figure that’ll be making an appearance alongside The Disarticulators‘ “Marble Madness” Lucky Bags tomorrow… the Kamen Fighter H.U.S.T.L.E mini figure from Bigmantoys! Originally seeing a very limited release at Clutter’s Toy Mafia back in 2013, the meticulously kit-bashed and re-sculpted take on the classic tokusatu hero Kamen Rider stands at a keshi-friendly 2″ tall, coming cast by our very own Tru:Tek at the Disart ToyLabs in a UV resistant rubber. Due to be touching down alongside the Lucky Bags and Screwballs in the Man-E-Toys store this Wednesday, January 28th for $12 a piece, both colorways and edition size are still to be confirmed…

But that’s not all… UME Toys’ long lost Tiki Guy is also set to join the H.U.S.T.L.E revolution too! Originally created alongside fellow H.U.S.T.L.E figure Martin Hairybottom for ToyCon ’13, the little guy – kit-bashed and re-sculpted by UME’s Richard Page based on his classic Tiki designs – recently resurfaced at the Disart ToyLabs studio amongst a few other neglected figures that’ll be seeing the light of day later in the year. Again, due to be cast up by Tru:Tek in a UV resistant rubber in the very near future, expect details of a limited release soon…

With June’s Toy Mafia opening it’s doors later today, the guys over at Clutter are proud to present the remaining 3 exclusives that’ll be available at Concrete NYC from 8pm onwards! Featuring a diverse mix of custom bootlegs, sofubi and mini figures, we bring you the full rundown of what lucky attendees can expect…

Bombermat Toys’s Cthulhu Warrior// Argentinian based Bombermat Toys, creator of the infamous Shit Wars custom bootleg line, have graced Toy Mafia with an exclusive edition of 10 “Cthulhu Warrior” figures. Kit-bashed from vintage Cthulhu and Conan the Barbarian, the H.P. Lovecraft inspired beasts has been cast in resin, coming hand painted by the artist. Bubble packed on a single-sided thick cardboard backer card, each figure has been signed and numbered, complete with Bombermat Toys sticker. 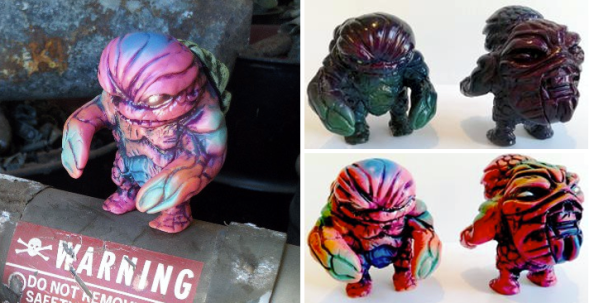 Butcherbrand’s Megara// Butcherbrand’s popular kaiju turtle beast Megara will be making an appearance tonight in an exclusive micro run of just 5 figures! Standing 3.5″ tall, the black soft vinyl cast piece has been sprayed in a gorgeous mix of green and purple… While not exclusive to Toy Mafia, Clutter will also have a small handful of Megara pieces hand-painted by Velocitron on specially cast hot pink sofubi (featured here earlier in the week).

Monster Island’s Mighty Joe Young// Toy Mafia regular Monster Island is proud to present JUNIOR, a mini version of the barbarous beast Mighty Joe Young! Inspired by the classic Ray Harryhausen stop motion animation, this resin cast creation is small enough to fit in your pocket with a personality big enough to scare your kids! Limited to 7 pieces cast in smokey black resin, a select few feature a color-fade from the feet up. Each gorilla comes with a unique colourway of the micro hostage and is packaged with a vintange inspired header card.

Clutter Magazine‘s 3rd Toy Mafia at Concrete NYC, June 22rd 2013, 8pm-late… For more info, head over to the dedicated Facebook page here. Remaining pieces after the event will be heading to the Clutter online store here on Monday, June 24th…

MAN-E-NEWS// The Disarticulators at Toy Mafia, plus the reveal of our Madball of Death!

We’re sure a number of you have been wondering why our posts have been a little irregular over the past couple of weeks, well now we can reveal why… As we’ve had the honour of preparing not 1, not 2, but 3 exclusives for this week’s June ToyMafia- including 1 all-new, never before seen figure, the Madball of Death! Expect a closer look at the incredible AmToys send-up later in the week, but in the meantime, we bring you a quick rundown of exactly what we sent over…

The Madball of Death// The latest (and quite possibly greatest!) release from the Disarticulators, the MoD was designed and sculpted by our very own Zectron, with production duties handed to Tru:Tek. Inspired by AmToys’ classic 80’s toy line, 50’s sci-fi and a dash of neo-kaiju, the ingeniously designed piece features numerous heads/surfaces depending on which angle you’re looking from. The piece de resistance has got to be the balls main unique design feature though… through the aid of neo-magnets, the thing splits in half to reveal a separate tentacled parasite figure!

Limited to just 11 for this ToyMafia exclusive (5 black w/pink insert, 5 pink w/black insert, 1 chase mixed part with marbled insert), each comes packed with epic header art created collaboratively between Zectron and the legendary Ralph Niese… The Madballs of Death have been priced at $50 a-piece. (Head over to our IG feed here for a look at the figure in some slightly more photogenic colours)

Kesh-E-Face// This month’s ToyMafia will also play host to the return of one of our most popular figures, Kesh-E-Face! Once again sculpted by the amazing Zectron, the loving homage to MOTU (in particular, our namesake Man-E-Face) has been cast by Tru:Tek in a keshi style rubber, featuring a TM exclusive black body and pink fully rotating/detachable head. Limited to an edition of 5 this time around, Kesh-E-Face comes packaged on a matching exclusive backer designed and hand cut by Tru:Tek. Priced at $40 each. 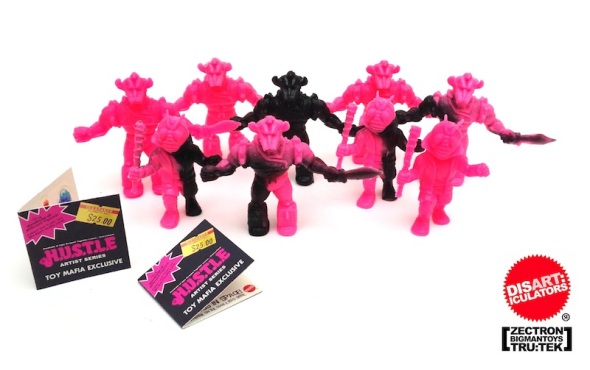 H.U.S.T.L.E Old Vs. New 2 Pack// Last, but by no means least, we bring you the latest batch of H.U.S.T.L.E, the Old Vs. New 2 Pack! Featuring fan favourite Mekamess (Nama Niku) from Wave 1, coupled with upcoming Wave 2 entry Kamen Fighter (Bigmantoys), the pair have been cast in a randomly assorted mix of pink, black and marbled- with no 2 sets alike! Packaged in an authentic gacha style capsule with exclusive TM insert and button badge, Old Vs. New has been limited to just 5 sets (10 figures in total), priced at $25 a piece… Stay tuned for info on the next June ToyMafia featured artist tomorrow, and be sure to head over to the Man-E-Toys IG feed here for a closer look at all the figures on offer!

Clutter Magazine‘s 3rd Toy Mafia at Concrete NYC, June 22rd 2013, 8pm-late… For more info, head over to the dedicated Facebook page here. Remaining pieces after the event will be heading to the Clutter online store here on Monday, June 24th…