Again, not a platform we usually feature here on Man-E-Toys, this recently posted Garbage Pail Kid inspired Munny custom from HamFX was just simply to cool to ignore… Created for the last Kidrobot live-painting event in San Francisco, the hilarious piece was inspired by arguably GPK’s most iconic character, Adam Bomb, featuring the same exploding cranium and mushroom cloud- but now in eye popping 3D! Coloured in a faithful selection of vivid tones, the paint app, although slightly rough, does a wonderful job in replicating the painterly strokes of the original trading cards- Impressive, especially when you consider this piece was created live! Now if only Kidrobot would take heed and get to work on an official series…

“Watch out there partner!”

Blamo alongside Shayne Maratea are proud to reveal a newly revised edition of their 2010 Billy the Kid project, created exclusively for Kidrobot! Standing at around 7″ tall, the hand crafted wooden art toy now brandishes a blue bandanna and carrot 6-shooter  in holster… Limited to 50 pieces worldwide and priced only at $125 plus shipping (approx £85), Billy the Kid is available through the Kidrobot online store now… Stay tuned for info on Kidrobot and Blamo’s next team up, the super-sized 24″ Billy, soon!

MAN-E-NEWS// The Night Terror customs from Matt A*…

Filling the gap for those patiently waiting on Matt A*‘s Night Terror resin, the highly talented artist proudly presents his latest custom Dunny series based on the same haunting owl sculpt. Featuring a Dunny head with sculpted wings, beak, and claws, the steam punk infused piece has been hand cast in resin and finished in an authentic weathered bronze colour scheme. Limited to just 10 pieces, the Night Terror Dunnys are available to pre-order from the Matt A* Customs store now for just $60 plus shipping. Stay tuned for more news on the full Night Terror release soon… 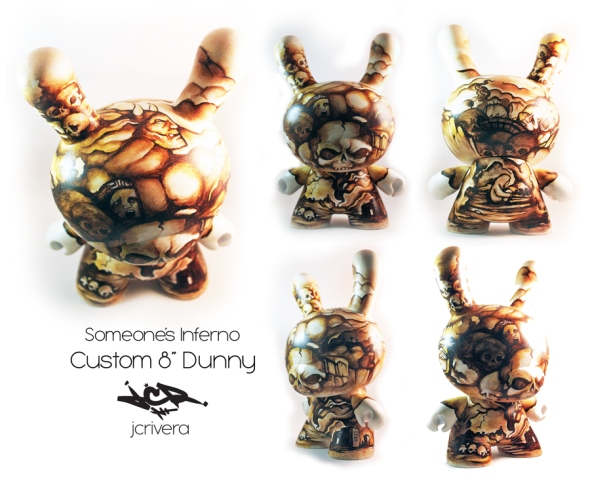 It’s been a while since we last featured any Dunnys at Man-E-Toys, but on catching wind of JC Rivera‘s stunning “Someone’s Inferno” yesterday, we knew we couldn’t pass the little guy up! More art-piece than custom, the beautiful figure has been inspired by computer game “Dante’s Inferno”, which was in turn inspired by the epic 14th century poem, Devine Comedy. Depicting a hellish world full of skulls, lost souls, and of course, Beelzebub himself, the harrowing scene has been painted in Rivera’s signature soft-focus style with a limited palette of browns and yellows… Unfortunately (for us!), Someone’s Inferno was a privately commissioned by a KR Board member, so if you’re interested in acquiring a similar piece, your best bet is to head over to Rivera’s site here with any enquiries.

Adam Pratt kindly shares details of his latest two work-in-progress projects, the Mechavirus x Halfbad Ammonaitos and the HateMale custom Munny… One of our favourite resin pieces to emerge from the past year, we were delighted to hear that Adam had finally settled down to work on Todd Robertson’s Ammonaitos, and as you can see from the early shots, he’s doing them every bit of justice they deserve! Initially working on a series of four, two will be customised in the funghi ridden style seen above, whilst the last pair will be grafted together to form the ram-shaped objet d’art piece seen bottom left. These are due to be landing in the Mechavirus store soon, so be sure to stay tuned for more details in the coming weeks…

Any followers of Adam on Instagram would have noticed this guy pop up a few times over the past couple of months… well the stomach churning “Chowderhead” custom Munny is finally nearing completion! Originally created by giving the poor Munny a resin bath and building up various layers of plumber’s spackle to create the monstrosity you see before you. Paint application is due to begin today, so along with the addition of a slime encrusted spoon, plus REAL dried meal worms, this is shaping up to be Adam’s grossest piece yet… Created for the New England clothing label called HateMale, the custom will be released alongside their latest Chowderhead tee… expect both to touch down at some point in October… 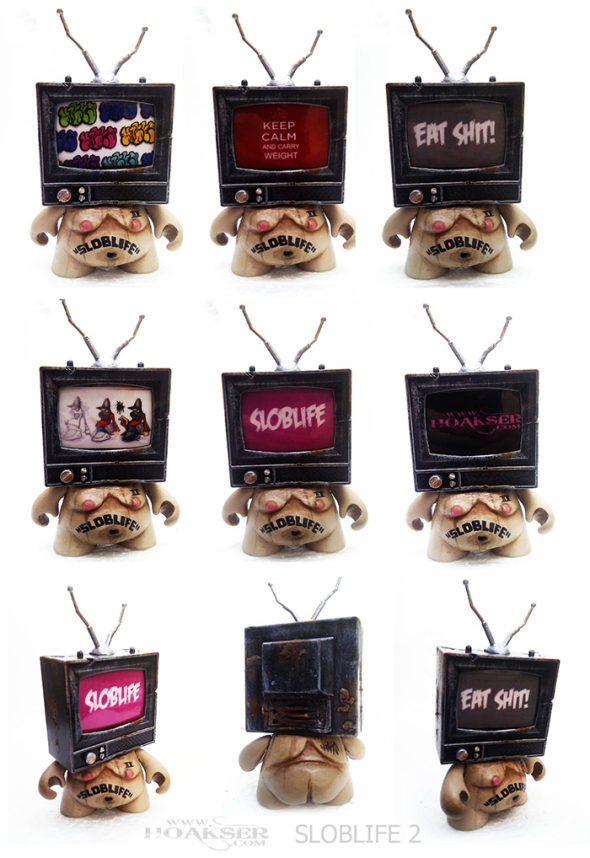 Following the instant sell-out success of the original Sloblife custom (find out more here), Hoakser kindly shares with us the latest instalment, Version 2… Refining pretty much every aspect of the original design, the stunning 14.5cm tall piece comes complete with sculpted man boobs, back fat and bum crack, a newly revised “clean” paint job, a staggering 9 print/channel inserts, plus a fully articulated T.V/head! Priced at a very reasonable £65 plus shipping, Sloblife 2 will be landing in the Hoakser store here at some point today. Be sure to keep checking back regularly… the original disappeared in a matter of minutes!

Continuing his onslaught of recent customs, UK based graffiti artist Hoakser is proud to present his latest Trikky creation, Eyesore! Marrying the various styles that Hoakser has developed over the last year, Eyesore cherry-picks the best aspects of the artist’s sculpted work, mixing them with the weathered aesthetic of the highly popular “Vandalised Vinyl” series. Painted using textured acrylics, the metallic creature even comes complete with his own mini Hoakser canvas and easel! Priced at just £48 plus shipping, Eyesore can be found alongside his similarly eye-weeping brother Gammy in the Hoakser store now…