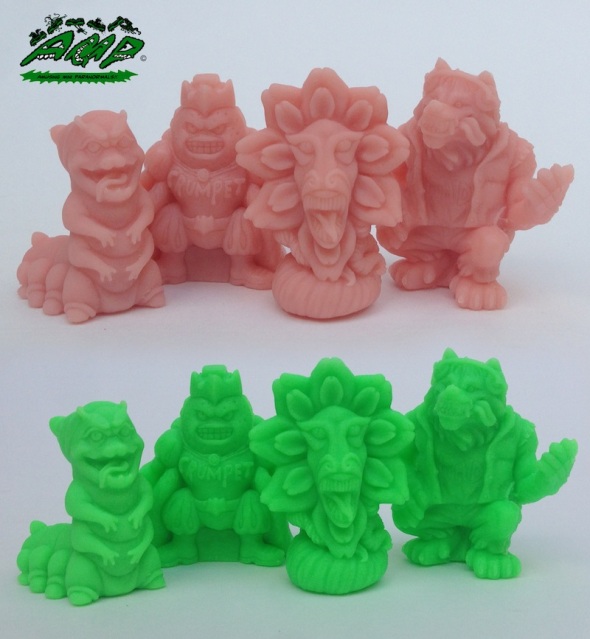 As promised yesterday, we proudly bring you guys yet another exclusive making it’s way to the Rampage Toys Superfestival 63 booth tomorrow… the debut of Meadowknight‘s A.M.P (Amusing Mini Paranormals) mini figure series! Featuring all 4 previously revealed designs; Alien Ghost Worm, King Crumpet, Beast Blossom and series figure head Big Rad Wolf, the unlikely bunch have been cast up in a keshi-style rubber by the Disarticulators‘ Tru:Tek, coming in super limited “preview” runs of both Flesh and the Rampage exclusive Neon Green for the event. Packed as singles with some beautiful header art by Meadow herself, any leftovers can be expected to touch down in the Rampage store at some point next week (pricing TBC)… Those looking to pick up A.M.P stateside will be glad to know that the quartet will be making an appearance at NYCC next month, with a general release planned for early November. Stay tuned for more info soon!

Teased here as near finished sculpts last week, Meadowknight is proud to reveal her latest line-up of minis in full! Due to be the first batch of figures under Meadow’s new A.M.P (Amusing Mini Paranormals) brand, the unlikely bunch consists of Big Rad Wolf (the line’s central character), Alien Ghost Worm, Beast Blossom (originally DandyLion) and our favourite, the Nickelodeon-esque King Crumpet. Making their way over the pond as we speak, our very own Tru:Tek will be in charge of rubber production for the project, with a debut of all 4 figures planned for NYCC in October. Not into rubber? Then you’ll be glad to know that 1Shot Toys will also be working on a resin batch in the near future too! Stay tuned for more details soon…

As if the previously posted Alien Ghost Worm and Big Rad Wolf weren’t enough, Meadowknight proudly presents yet another 2 mini figure sculpts to add to her ever growing army of scene dominating designs! First up we have the rather evil looking Dandylion (second from the left). Originally released as a pendant design a while back, the cenobite inspired face sculpt has been retooled as a fully fledged mini figure, complete with a thick worm-like body and petaled maine! Joining Dandylion, Meadowkinight has also revealed the near-finished King Crumpet too. Taking a leaf from Big Rad Wolf’s book in terms of aesthetic, the King has a slightly more lighthearted (if still a little sinister) approach akin to Nickelodeon’s mid 90’s classics… A huge plus in our books! Word has it that both figures, along with the revised Rad Wolf and Ghost Worm, are just about ready to hit the silicone for production- so expect to see runs from both 1Shot Toys (resin) and our very own Tru:Tek (rubber) in the very near future!