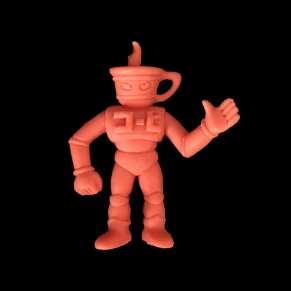 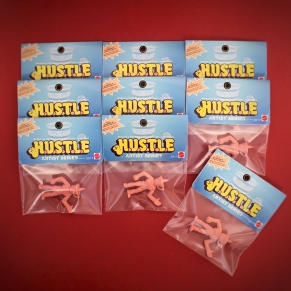 Rampage Toys and our very own Tru:Tek return with an all-new bootleg kinkeshi collab for Nerdcave‘s M.U.S.C.L.E. M.E.M.O.R.I.E.S. group show this week

NOTE: Those living outside the UK can expect a release through Rampage Toys soon 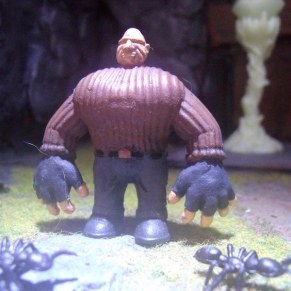 Bigmantoys‘ unofficial tribute to both the Puppet Master flicks and classic mini figure line M.U.S.C.L.E – Puppet Muscle – is set to return this week for a second wave of releases! Digitally sculpted by Bigmantoys’ Lee Burbridge at just under 2″ tall each, the latest batch of figures features the return of Blade and Tunneler alongside newcomers Pinhead and Leech, with fully painted resins coming in at $20 each, rubber flesh versions for $16 singularly and $28 as 2 pack sets, plus purple glitter infused for just $15- each coming packed in a poly bag with glossy header. Look out for all 4 figures in the Bigmantoys store this coming Saturday, March 19th at at Midnight London time… 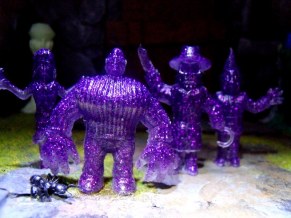 Up and coming keshi producer Kuidaore Toy are proud to announce the release of their debut mini figure, the awesome Mr Rucksack! Heavily inspired by Kinnikuman’s obscure knock-off figures, the pachi-style keshi has been hand sculpted by Kuidaore at an authetically scaled 2″ tall, coming factory produced in a flesh-tone, keshi-style rubber. Packed with a companion sticker and pixel art header, the little guy is currently up for grabs at just 1000yen ($8) plus shipping. Interested parties can hit Kuidaore up directly through their site here for details on how to purchase…

Hot on the heels of the recent “Gourdon” treasure box release, Justin Jewett of Hateball fame is proud to reveal that a fresh batch of Zinewolf keshi have just touched down online! Originally releasing as part of the “Zinkeshi” release a few months back, the little guy has been reduced, prototyped and produced by our very own Tru:Tek at the Disart ToyLabs, coming in around 1/5th of the size at 1.5″ tall. Cast in a blind selection of green, red and flesh colored rubber, the Zinewolf keshi can be picked up right here for just $10 a piece. Supplies are super-limited, so be sure to head on over ASAP to avoid disappointment!

Originally seeing a limited release in resin courtesy of Toy Art gallery, Monster Island‘s awesome “Mad Wrestlers” are set to return in keshi-form courtesy of the Disart ToyLabs! Heavily inspired by the Weirdballs mini figure off-shoots, these ingenious little guys feature recast and reduced Madball heads that have been kit-bashed with a number of different M.U.S.C.L.E bodies. Featuring a total of 6 different designs from Monster Island’s Paul Bass – 3 more than the original release – the group have all been recast by our very own Tru:Tek in a flexible, UV resistant rubber. Due to come packed with exclusive artwork from tattooist/illustrator AshMadeThis, the Mad Wrestlers will be up for grabs in a number of limited colorways soon, with the main drop penciled in for DCon in November. Look out for the full lowdown on these over the next couple of weeks!

Up and coming toy artist TerribleWhore has just unveiled the prototype for his debut sofubi, the F***ing Four Fingers! Heavily inspired by the iconic Sneagator Claw kinkeshi/M.U.S.C.L.E mini figure, the upscaled piece features near identical textures to the original, as well as introducing some interesting new design revisions; a “mouth” palm and “eye” fingers that resemble a face, plus a haunting 4-eyed skull that replaces the Sneagators face on the index. Due to be released soon, be sure to stay tuned for any updates on this awesome figure as soon as we have them…

Keshi master Eric Nilla has revealed that he’s teamed up with mini figure collector Gian Paolo Mattarollo for his latest custom keshi, the jaw-dropping Shaitan the Evil Cross! Conceived and designed by Mattarollo, the stunning figure has been kit-bashed and intensively re-sculpted by Nilla using the elusive Satan Cross and Spinning Head Ashuraman kinkeshi. Featuring a total of 4 fully interchangeable parts; a torso, back legs, custom trident and fully rotating head, the little rubber guy will be touching down in a variety of different colorways on the Nilla store at some point later today (12/23), coming in at just $23 a piece…