Frank Kozik has just announced that his giant sized Heathrow sofubi will be making a return today in an all-new “Albino” colorway! Produced in a light pink soft vinyl with white and red masked sprays, the 6″ tall figures have been limited to an edition of 30 this time around, each coming packed with a custom header card signed and numbered by the artist. Touching down in the Kozik store today (8/27) at Noon PST, expect to pay around $75 plus shipping for the figure… 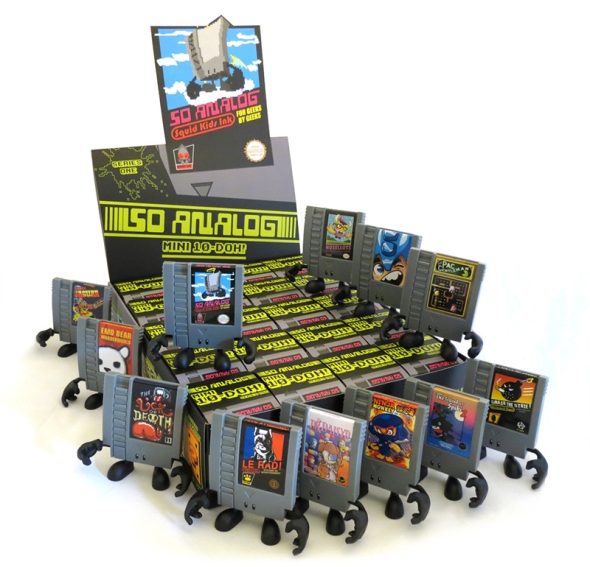 Following a successful debut at SDCC earlier this month, Squid Kids Ink are proud to reveal that the long awaited Min 10-Doh’s are finally ready for general release! Paying tribute to 80’s console, the Nintendo Entertainment System, the cartridge inspired figure is available in 16 different designs from 12 of the art toy scene’s elite, including 4 super rare gold chases! Priced at just $10 each, the blind-boxed minis are available in a case of 20 through the Squid Kids Ink store, with singles due to hit your nearest art toy emporium some time soon. Anyone interested in stocking the series should head over to DKE Toys‘ wholesale site with any enquiries… 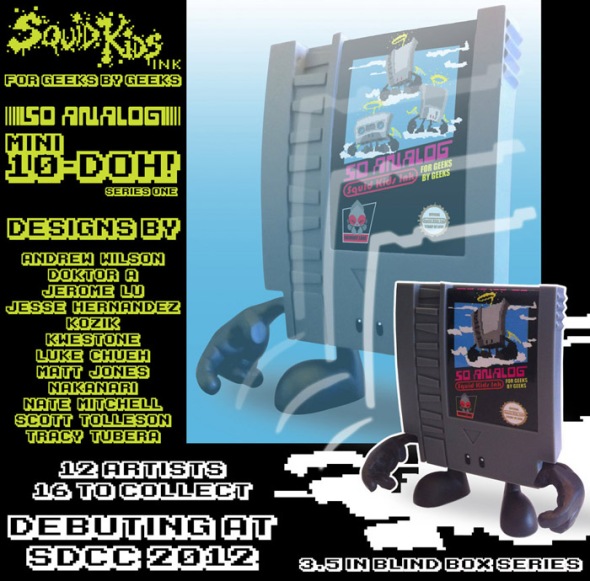 A week in toys…

Welcome to our second weekly round-up of the art toy scene! In our endeavour to search for exclusive content for the site, we regrettably miss a lot of the art toy industry’s biggest stories throughout the week. To combat this, we’ve decided to create a new weekly feature that helps sum up some of the most important developments in the scene…

This week we take a look at the newly released metal “Neo Eyezons” from  Mark Nagata, Jon-Paul Kaiser’s “Captain Sturnbrau”, Ugly Dolls’ M.U.S.C.L.E inspired “Lucky Uckys”, and much, much more!

Released on Wednesday (January 11th), Toy Art Galley’s latest addition to their extensive range of metal cast art toys came in the form of Mark Nagata’s (Max Toy Co) Metal Neo Eyezon. Available in four different metal finishes; Gold – $195, Silver – $175, Copper – $150, and Black Nickel – $165, the 5″ tall hand crafted figures have been limited to a run of 100 in total, and are only available through TAG’s store here.

Available to pre-order as of this week, Jon-Paul Kaiser’s latest addition to the Whispering Corsair series comes in the form of the Captain Sturnbrau mini Qee. Unique in its level of customisation for a Toy2R production run, the captain features a wooden leg, hook hand, and pirate hat, all in Kaiser’s unique comic book style. The figure can be found on Toy2R’s store here for $40.

Hot off of the heals of the recent Martin Longbottom prototype reveal last week, Richard Page of UME Toys revealed yet another new sculpt in the form of Pembleton Stranglefoot on Wednesday. Based on the sticker design Richard did for the promo pack during NYCC, there is no news with regards to the moustachioed octopus’ release date or availability, but we’ll bring you the news as soon as it hits…

With the opening of Martin Hsu’s latest solo exhibition at Dragatomi this weekend came the final preview of his long awaited Dragon Boy production prototype. No release date or editions have been announced as of yet, but we expect the figure to drop in the next couple of months. Head over to Dragatomi’s site here for more information on the show.

Following the deluge of January releases announced this week, Super7 rounded off the week with yet another two teasers in the form Chewbacca rocking a t-shirt and bowcaster, and a blister card design similar to that of the Sucklord. What these images are telling us is anyone’s guess, but we’ll keep you up to date on any developments as we get them…

Frank Kozik’s first 10″ Labbit for 2012 was announced this week in the form of Choice Cuts. Coming with handy dotted lines for butchering the finest cuts of Labbit, the tasty morsil is set to drop on February 9th for $80 in an undisclosed edition number  at Kidrobot retailers worldwide.

Last up comes the reveal of Ferg’s latest Squadt addition, the K11 [FROZN WHOLE] III pac. Available this Monday (January 16th) through Squadt’s store here, the three pack features new characters “ROVR”, “SPIKE” and “FIDO”, replete with jackets, modular harnesses, and removable helmets. 50 out of the 200 available sets will come in the Yello Sno variant, with both colourways priced at $85 each. 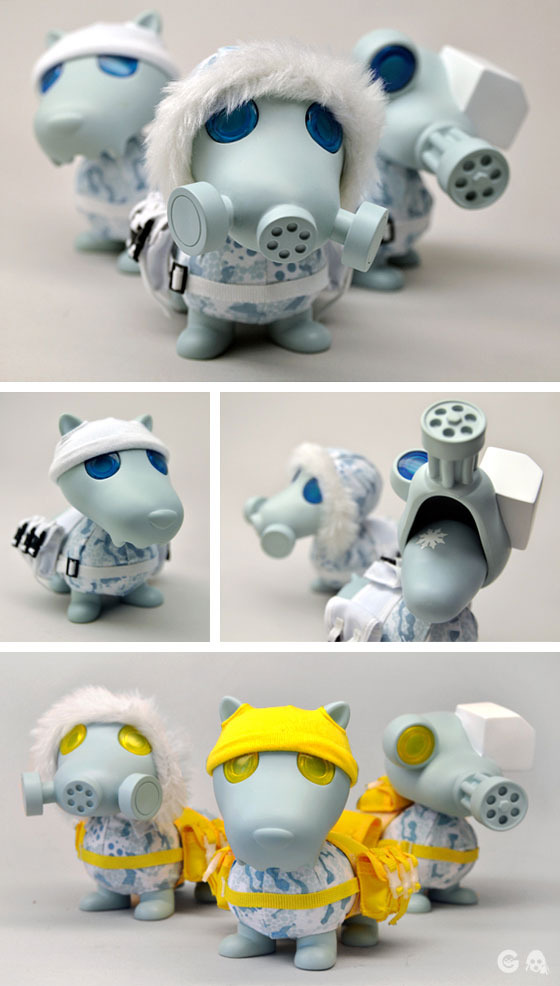 Fusing the talents of contemporary tattoo and illustration, the Hope Gallery’s latest project, entitled Quick and Painful, features a host of today’s most elite low brow artists presenting their own take on the art of tattoo flash. Used widely throughout the last century, and made famous by the likes of Sailor Jerry and Doc Forbes, ‘flash’ is the name given to a set of tattoo designs printed or drawn on 11″ x 14″ paper.

Curated by Hope’s Nicole East, the exhibition features the talents of Alex Pardee, Amanda Visell, David Horvath, Frank Kozik, Craola, Joe Ledbetter and Ron English amongst others, with all of the participating artists work available to purchase as traditional 11″ x 14″ prints.

“After years of working in the low brow and pop art scene, I started to see how many fans were getting tattoos of my favorite artists. It seemed a natural urge to make sure it was done right…”

Alongside the amazing artwork, the four part tour has also become home to some of the tattoo industry’s biggest artists, including Joe Capobianco, Eric Merrill, Julio Rodriguez and the recently confirmed Jesse Smith (featured in TTFiles here), who have been recreating the flash designs as real tattoos for a mind-blowingly cheap $40 a time.

With the first two legs of the tour opening to great success over the past month at Crewest (Los Angeles) and Hope (New Haven), famed art toy gallery Rotofugi (Chicago) is poised to host the third instalment at the beginning of next month, with appearances from illustrator Huck Gee and legendary tattooist, Christian Perez. The project will finish off at the Art Basel (Miami), with Tru:Teknology Files favourite, Jesse Smith, making a guest appearance at the three day event in December.

Here’s a quick preview of some of the shows entries- 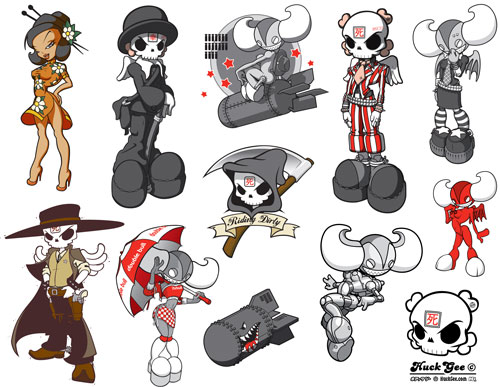 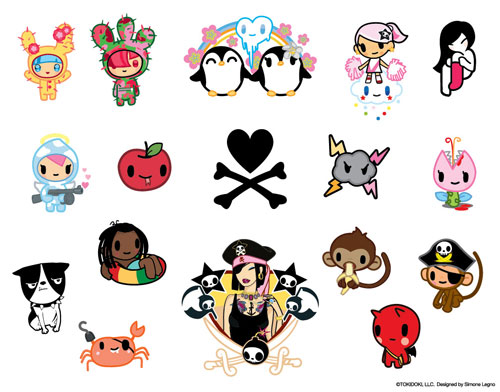 “Our piece for the show is a tribute to the awesome and infamous Name Neko Cats of 80′s Japan, created by Satoru Tsuda.
Herman the Cat has got in with these fearsome biker-cats and started running riot. To combat this we’ve created a rival Panda knife-gang to sort them out…. “

(Above)One of the many beautifully realised flash pieces from the legendary British artist / designer, Pete Fowler.

Prints of the flash art, along with limited edition t-shirts, are available to purchase at the show for a special price of around $25 each, with a general release through the Hope Gallery’s online shop from Sunday, October 9th at $5 more a-piece.