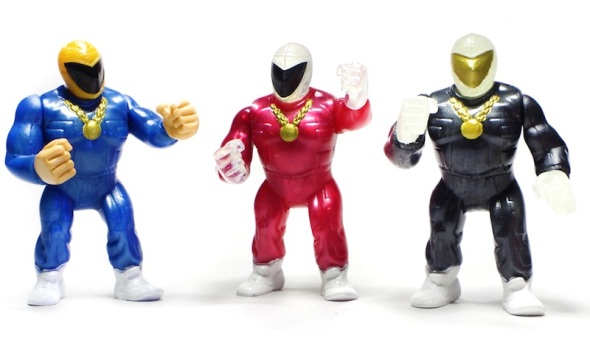 Robert Roudriguez over at Scraped Resin kindly shares details on the latest addition to the ever growing Battling Bastards line, lucha DJ, Mixtape! Once again kit-bashed from a mix of vintage action figures and Mexican luchador toys, the first edition has been limited to 10 figures, each coming hand cast and painted in 1 of 4 standard colours plus chase. Running at $65 a piece, Mixtape is due to come packed with a full colour cardback, featuring a resealable blister bubble so that the figure can be displayed carded or loose! To be sold blind-bagged, look out for Mixtape in the Scraped Resin store starting Wednesday, August 14th at 5pm PST…

The Mystery of Mixtape//

While Mixtape’s enigmatic lucha mask shrouds his face in shadows, it’s nothing compared to the mystery of his past.  Rumors of growing up in Brooklyn, or possibly Tokyo, have never been confirmed, but he first appeared in Tijuana in the late nineties with a crate full of records and clothesline that could almost take a man’s head off.

Adding to the mystery is the fact that nobody has ever heard the bastard speak since he showed up on the scene.  Typically behind his trusty turntables, he communicates strictly through record scratches and audio samples, generally able to get his point across effectively.

While a widely feared rudo in the ring, his DJ service’s Yelp review is currently only 2 and a half stars due to a tendency to only play Wu-Tang regards regardless of the clients requests.  As Ultimate Carlos began assembling his army of lucha thugs, he needed a giant bruiser and someone to coordinate entrance theme music.  In Mixtape he had found both.

The Jelly Empire‘s Selina Briggs kindly shares details of her latest run of Jelly Bot resins, the ready-to-rumble Luchabots! Kicking things off in style, Selina will be holding a wrestling tournament for the 6 new custom designs, whereby fans can decide the winners of each fight by voting through the Jelly Empire Facebook page right here. News on the actual release are still pretty thin on the ground at the moment, but Selina has stated that each wrestler will come with his own stats card, sticker and micro jellybot referee, as well as a blank jellybot and stat card to make your own competitor… Oh, and of course, the lucky collector who takes home the tournament winner will also receive the highly lauded championship belt! Stay locked on the Jelly Empire blog here for more info on the drop soon.