Having just smashed the $25,000 target with just 2 days left until the end of their S.U.C.K.L.E Series 2 Kickstarter campaign (get the full lowdown on the project here), DKE Toys and The Sucklord are proud to present another 3 stretch goals to help push that total even further! Bringing the staggering total of figures in the series up to 14, the new additions include a mini rendition of the Glyos Sucklord available at $26,000, Scott Tolleson’s Blowpeg at $27,000 and the Sucklord Dumny at $28,000. If the specified goals are reached by the end of the campaign, every pledge over $45 – the price of the Kickstarter Exclusive Set – will be guaranteed to receive a copy of each figure in both GID and the standard flesh-tone, an extra 6 figures to an already brimming collection of 22! With the campaign finishing in little over 30 hours time,we suggest heading over to the page right here and getting that pledge in ASAP before it’s too late…

With backing for the S.U.C.K.L.E Series 2 Kickstarter now a little over 60%, the guys over at DKE Toys have decided to give the project a little push by adding an eleventh figure to the already bulging line-up… Frank Kozik‘s Krono Pussy! Originally released as a 3.75″ custom bootleg as part of The Sucklord‘s Super Suck Up! 2 show last November, this new 2″ tall mini figure rendition has been created in much the same way, featuring a kit-bashed Sucklord 75 with an originally sculpted octopus head. Available to all backers that pledge a minimum of $45 – the price of the Kickstarter Exclusive Set – each will be guaranteed to receive a copy of the figure in both GID and the standard flesh-tone. With the campaign finishing in little over a weeks time – Friday, November 5th to be exact – we suggest heading over to the page right here and getting that pledge in ASAP before it’s too late… 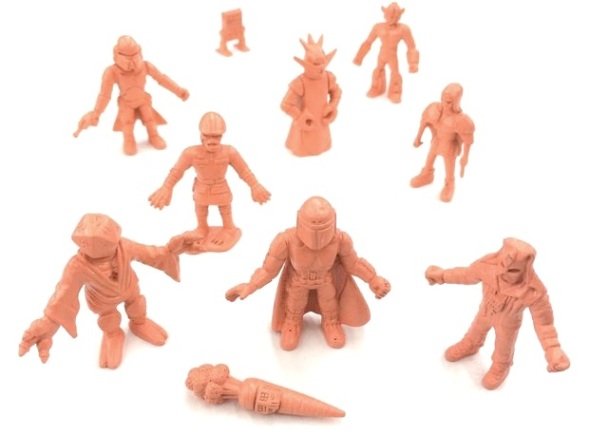 Having proved a huge success worldwide since it’s successful Kickstarter campaign over a year ago, The Sucklord and DKE Toys‘ S.U.C.K.L.E mini figure series returns for a rather vengeful sequel! Once again consisting of 10 PVC renditions from the Sucklord universe, including Sucklord 75, Sucklord 61, Star Chump, Mary Paper$, Gay Energon, Douchebot, Crystal Pharoah, Wrecked Souls of Forgotten War, Chronos, and Bionic Carrot, each 2″, M.U.S.C.L.E scaled mini has been hand sculpted by October Toys’ George Gaspar based on the original 3.75″ figures. Currently available through an all-new Kickstarter campaign right here until Friday, December 5th, a number of different tiers and add-ons are available, ranging from a basic “Flesh” set for just $25, right up to THE DOV package- which, for $1,250, secures all released colorways in the Completist Set, plus a set of all 10 figures hand cast in resin by George Gaspar/October Toys! Head over to the Revenge of S.U.C.K.L.E campaign page here to take a closer look… 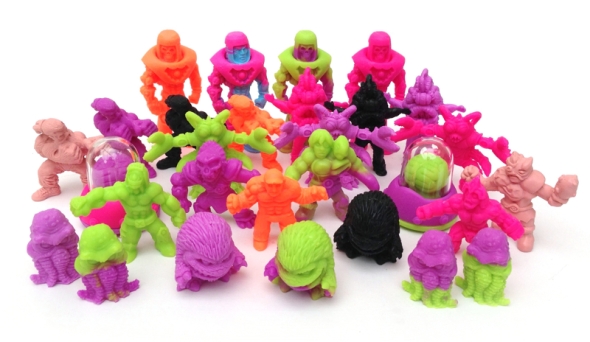 You guys may have read about it elsewhere already, but today we bring you the official lowdown on our huge August “Made 2 Order” sale! With most of our Disarticulator figures only seeing releases as limited exclusives, we’ve decided to offer them all up one last time in a whole slew of unreleased colours…

Featuring fan favourite, the Critter, alongside Kesh-E-Face, Higekami, and for the first time, the whole of the Tiny Terrors series as singles, the motley crew will also be joined by the general release of both Wave 1 & 2 of the Disarticulator x Ironhaus Pro H.O.R.D.E mini series. Up for grabs starting this Friday, August 2nd at 9pm London time over at the Man-E-Toys store, pre-orders will be running right through until the end of August. Pricing options won’t be revealed on the store until early tomorrow, but we can confirm that a number of figures will be receiving cheaper “bagged and headed” options for those looking to get more mini figure for their money!

But that’s not all… To kick things off in style, we’ll also be offering up this stunning 1/1 Deka Manzilla test shot! Revealed here yesterday, the figure will mark the first in our Deka H.U.S.T.L.E series coming later this year. Designed/kit-bashed by Nama Niku, the 5 inches of wacky bootleg goodness has been cast in a light blue rubber by our very own Tru:Tek for this one-off preview release, priced at just $30 plus shipping… Stay tuned for more info on the full release later this month!

After long last, the Rampage Toys H.U.S.T.L.E Artist Proofs will finally be up for grabs over the weekend! Featuring both Ugly Cenicorn and Super Cupcake designs from Wave 1, the pair have been cast in a mix of yellow and red keshi-style rubbers, coming packed in an ingenious Matchbox inspired slide box with insert. Due to go on sale at the “Paralyzing Toys” Wonder Festival booth (8-28-09) this Sunday, July 28th, any remaining stock will be heading to the online store soon after… 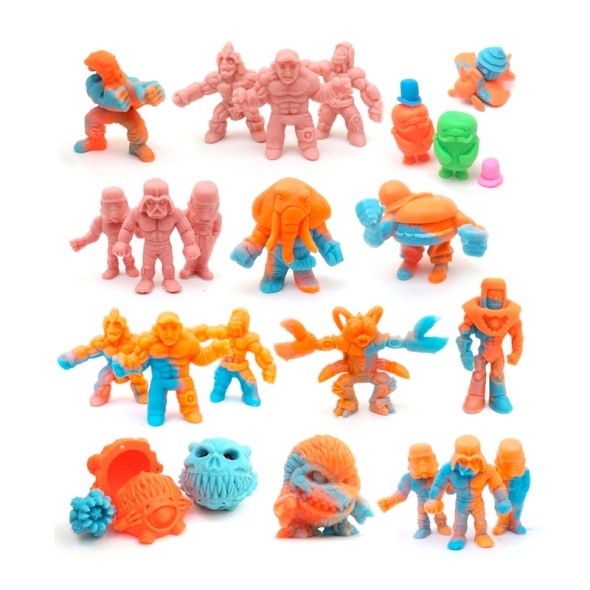 Whilst the blog has unfortunately taken yet another hit today (back tomorrow, we promise!), we’ve been hard at work preparing the online sale for the slew of goodies we have left over from last weekend’s Cardiff Tattoo & Toy Con. Featuring a number of previously posted Disarticulator exclusives including the latest Madball of Death, collaborations with the likes of Ironhaus, turboPISTOLA, 1Shot Toys and Edge of Doom, PLUS the preview of Rampage Toys’ latest keshi figure, the Cupcake Plane, we suggest heading over to the store right here to take a closer look at what will be on offer come 9pm London time tonight (just an hour and a half away now!)… We once again thank you guys for your patience with the blog, expect a HUGE backlog of news stories to follow tomorrow!

First off, we’d like to give a massive apology to our readers for our lack of posts over the last week. What with Cardiff Tattoo & Toy Con over the weekend, and a whole load of casting to be done for a certain Wonder Festival in just a few days, we unfortunately had to put the old girl on the back burner… The good news is that we’ll be back at full steam in the morning with a whole host of new stories, PLUS the all important release details for tomorrow’s post-con drop! In the mean time, you’re just going to have to put up with a full rundown of what we’ll be offering up courtesy of Rampage Toys at Wonder Festival on Sunday… Enjoy!

Kesh-E-Face// We will be offering up both a restock of the original Rampage exclusive Green variant and a Wonder Festival exclusive marbled blue/red. Standing at 3″ tall and cast in a flexible keshi-style rubber, the loving tribute to all things MOTU comes with the standard 3-faced, fully rotating head. Packed with custom hand cut backers and blister bubbles, both colourways have been limited to 3 pieces each.

Madball of Death (The Deathball)// The fourth edition of our newly released AmToys homage, the MoD has been cast in a Rampage exclusive green w/pink insert. Consisting of 3 parts (2 magnetically joined halves and parasite insert), the figure comes bagged and headed with collaborative artwork from Zectron and Ralph Niese. Limited to just 3 this time around, there are talks of another limited run in the near future.

Cupcake Keshi Plane// Making a secret appearance at Cardiff Tattoo and Toy Con over the weekend, Wonder Festival will see the official release of Rampage Toys‘ latest keshi, the Cupcake Plane! Sculpted by Jon Malmstedt using the Micro Cupcake Kaiju, the adorable little figure has been cast by the Disarticulators in a mix of flesh, red and blue rubber. Limited to just 11 this time around, each comes with interchangeable pilot plus 2 points of articulation.

Elephantos// Designed and sculpted by the one and only turboPISTOLA, Elephantos receives his second exclusive keshi variant in a retina melting marble green/pink colourway! Cast by the Disarticulators in their special blend of super-bouncy rubber, the little guy has been limited to 4 bagged and headed pieces… Expect more news on the general release soon!

Higekami// The master of Beard-Fu makes one last exclusive appearance before his long overdue general release next month, coming in a stunning red/blue Wonder Festival colourway! Cast in a flexible rubber, the 2″ figure comes mounted on a thick, hand cut backer with SNES style insert and Beard Fist badge. These have been limited to 3 pieces.

Sgt. Angus// As with Elephantos, 1Shot Toys‘ leader of the beef battalion makes his second appearance as a Rampage Toys exclusives. Again cast in the standard Rampage green/pink, the little guy has been limited to 3 pieces, each coming complete with die-cut vinyl sticker and cut-out-and-keep card.

H.U.S.T.L.E Artist Series: Wave 1 FULL SET// The first and only time the whole of Wave 1 will be offered up together (barring Spanky Stokes’ FGF!), the full set of 10 figures have been cast in a vivid green and pink rubber. Missed out on the little guys the first time around? Then this is your chance to bag the lot at a single, reduced price!

Weirdos in Space// A huge success upon release last month, the Weirdos in Space, well Cupcake Lucha at least, has made a return! Cast in a Rampage exclusive silver w/ pink pilot, the multi-part rubber figure has been limited to just 4 this time around, with another batch in silver/green to follow next month.

The Critters// Last, but by no means least, Zectron‘s ever popular Critter inspired mini figure will be gracing Wonder Festival with yet another exclusive colourway! Matching both Kesh-E-Face, Higekami and the Cupcake Plane’s, the 1″ minis have been cast in a marble blue/red rubber. Limited to 4, each comes packed with an exclusive header and insert.

Due to go on sale this Sunday at the ‘Paralyzing Toys’ booth (8-28-09) alongside a whole host of other amazing artist’s work, any remaining stock will be heading to the Rampage Toys online store soon after. Stay tuned for more reveals from the booth (including the long awaited Rampage H.U.S.T.L.E APs!) later this week…