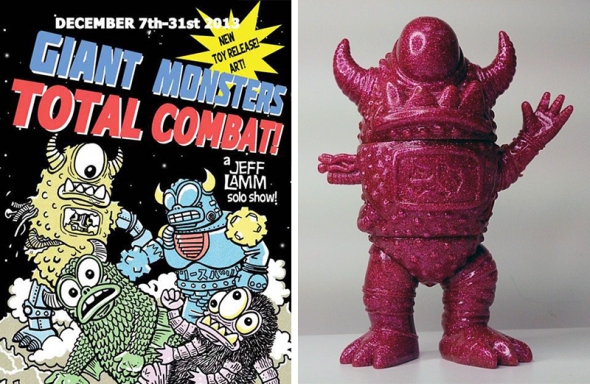 Continuing his unstoppable run of art shows this year, Jeff Lamm has revealed he’ll be invading the Rivet Gallery this Saturday, December 7th for his latest solo exhibition, Giant Monsters, Total Combat! Set to feature a number of original illustrations, silkscreen prints, canvas prints, and digital prints, plus the arrival of the much requested “Muscle Flesh” Greasebat & Friends Gummi Play Set, the real lure has got to be the debut of the long awaited “Battle Damaged” M5 Bravo- coming cast in an exclusive red glitter vinyl courtesy of Unbox Industries! Running from 7pm-10pm this Saturday, any leftovers from the show will hopefully make it to the online store at some point next week… 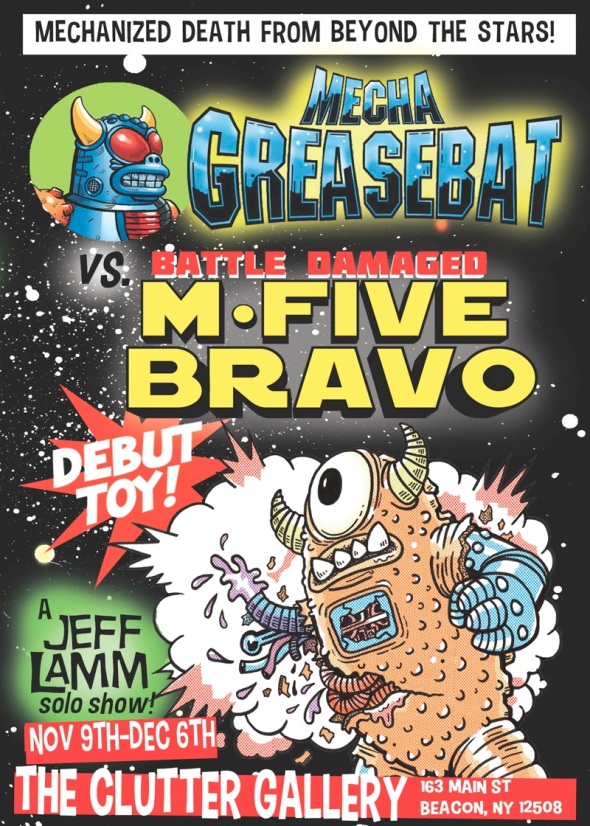 The Clutter Gallery are proud to present the Battle of the Century… Mecha Greasebat vs. M5 Bravo! The latest solo exhibition from Jeff Lamm, the ultimate kaiju showdown is set to feature a number of original illustrations, silkscreen prints, canvas prints, and digital prints, plus exclusive “M5 Bravo & Stee-Gar” flocked vinyl figure two-packs as well as the “Greasebat & Friends Gummi Play Set” in the Sakhalin Blood Red colourway from Unbox! As a special bonus, the show will also play host to the debut presentation of the new “Battle-Damaged” M5 Bravo vinyl figure, which should hopefully be seeing a general release soon after (check our previous post here for an early teaser). Opening it’s doors on November 9th, with a reception from 6-9PM, the various works will be on display until December 6th at The Clutter Gallery, 163 Main St., Beacon, NY 12508. Those unable to attend the opening can sign up for Clutter’s Gallery Preview List to have first buying rights to pieces in the exhibit, head over here to get enrolled now! 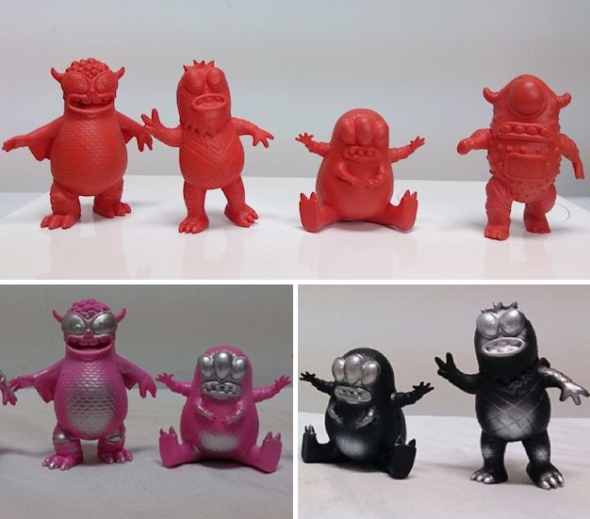 Judging by the recent postings from Unbox Industries, we’re set to receive new colourways of Jeff Lamm’s Greasebat Gummi Playset! Whilst we’re guessing the top “Samhain” orange will be reserved for a special Halloween release, we’re more interested to see what happens to the other hand sprayed versions revealed. The Hot Pink with Silver accents certainly suggest that at least one set may be making an exclusive appearance at the Clutter NYCC booth… we guess time will tell next week! 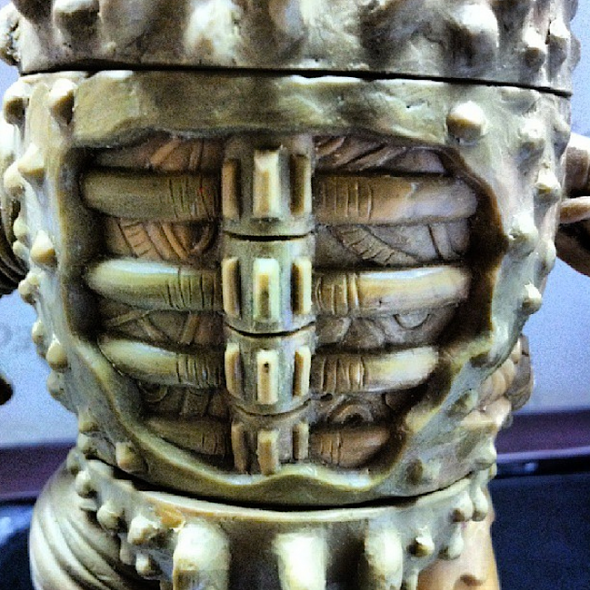 Posted on Instagram yesterday, it would appear Unbox Industries are working on a new ‘cutaway’ version of Jeff Lamm‘s M5 Bravo figure… Pictured here as a work in progress clay sculpt (we believe the original was digital), the close up image suggests that the piece will still feature the same proportions as before, albeit with a huge removed back section, revealing spine, ribs and innards! As with the previously posted “Rice Grain” Greasebat, we’re still not completely sure if this is just an experiment or a fully fledged production piece- but you can be sure that as soon as we find out, you guys’ll be the first to know!

Making an appearance at SDCC last week, Jeff Lamm‘s Greasebat & Friends Gummi Playset will finally be up for grabs online this Friday, July 26th! The latest PVC minis to be produced by Unbox Industries, the set features the iconic Greasebat alongside previous 6″ designs M5 Bravo, Stee-Gar and Spikewad, all re-sculpted in keshi scale. Available in either neon orange or pink, the set will be touching down in the Unbox store for a wallet friendly $15 plus shipping, coming packed with vintage style header art from Lamm… 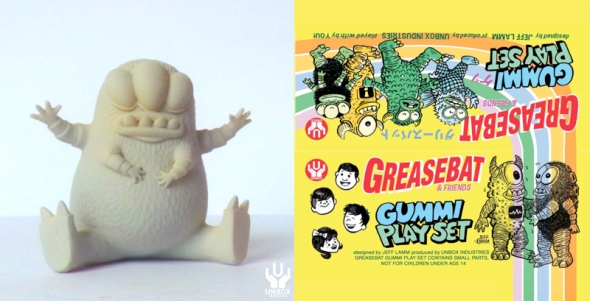 With the success of Triclops’ plastic B.A.S.T.A.R.D’s firmly under their belt, it appears that Unbox Industries are to continue their onslaught of rubbery mini figure goodness as they proudly present their latest collaboration with Jeff Lamm… the Greasebat and Friends ‘Gummi Play Set’! Featuring all 3 previous Lamm x Unbox characters (Spikewad- pictured, M5 Bravo, and Stee-Gar) alongside the iconic Greasebat, we assume the new 2″ sculpts will be offered up together as the “set” in the title suggests. Release details are still thin on the ground at the moment, but with a debut set for both the Taipei Toy Festival (July 11-14th, 2013) and San Diego Comic-Con (July 18-21st, 2013), we haven’t got much longer to wait… Stay tuned for a full reveal soon!