The guys over at Clutter Magazine are proud to reveal that the latest issue (#23) of their free print publication is now up for grabs! Celebrating the publication’s 10th anniversary in style, the Winter 2014/15 issue packs in interviews and features with – amongst others – Bwana Spoons, Frank Kozik, and Splurrt, as well as the third article for the mag from our own editor-in-chief, Tru:Tek- a fully comprehensive guide to The Disarticulators’ keshi! Spanning across 4 pages this time around, the whistle stop tour covers every release from the “Critters Inspired” Mini Figure right up to the recent Leucotomy ball and beyond- an article that we’re sure our regular readers aren’t going to want to miss out on… Anyone looking to grab a copy can currently find it in the Clutter store right here, with free copies due to touch down at your local specialty retailer soon- have them hit up DKE Toys Distribution if they’re not stocking it already!

Clutter Magazine are proud to reveal that the latest issue (#22) of their free print publication is now up for grabs! Featuring an extensive article on the ReAction Figure brand alongside interviews with – amongst others – DeathCat Toys, Miscreation Toys and Bob Conge/Plaseebo, these have been joined by the second article for the mag from our own editor-in-chief, Tru:Tek- a fully comprehensive guide to the world of contemporary bootleg keshi! Spanning across 5 pages, the whistle stop tour covers the widely-unknown history of the pachi/bootleg figure, concluding with profiles on some of the most influential artists and figures from over the past 15 years- an article that we’re sure our regular readers aren’t going to want to miss out on… Anyone looking to grab a copy can currently find it in the Clutter store right here, with free copies due to touch down at your local specialty retailer soon- have them hit up DKE Toys Distribution if they’re not stocking it already! 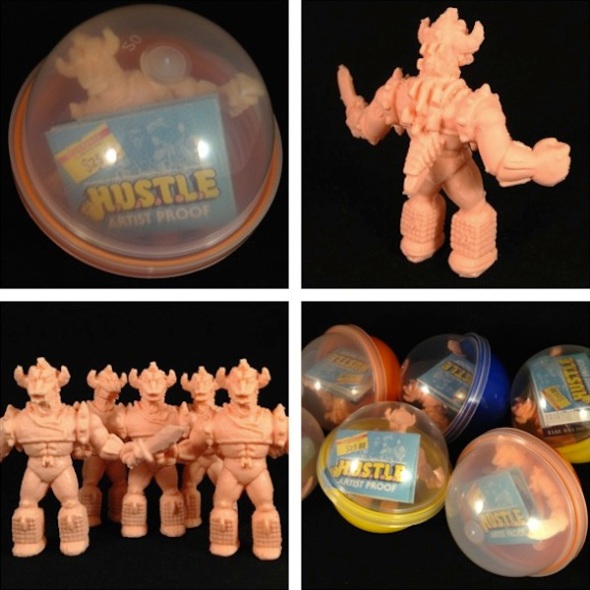 As mentioned in our Ray Skull coverage last week, Nama Niku is the latest out of the blocks with his H.U.S.T.L.E Wave 1 Artist Proofs, proudly presenting the long awaited ‘Kinkeshi Flesh’ Mekamess! Undeniably one of the most popular designs from the first batch of figures, the MechaGodzilla kit-bash has been cast up in the original, lighter kinkeshi flesh colour by our very own Tru:Tek using a flexible urethane rubber (check out a comparison shot here). Limited to just 5 pieces, 4 of which have already been taken for, the remaining figure is now available through board auction over at LRG. Donated by Nama Niku to help fund a new hard drive for the popular mini figure forum, interested parties can review and post their bid right here– be sure to head over soon though, bidding finishes at 6pm Pacific time this Sunday, May 5th!

With the much talked about first toy show at the newRampage Studios opening it’s doors later this week, we’ll be giving you guys the full lowdown on all the various figures we’ll be debuting as The Disarticulators. Today we start with our first truly collaborative project, the Tiny Terrors from the Deep mini figure pack…

Featuring 3 separate figures from Tru:Tek, the Amazing Zectron and Bigmantoys, each design has been influenced by a different character from 90’s underwater RTS videogame, XCom: TFTD. Initially produced in an authentic kesh-style rubber by Tru:Tek, a standard blue/pink edition (pictured) will be available in extremely limited quantities at the Rampage Studios opening, with further stock hitting the Man-E-Toys store alongside an edition of 5 ‘M.U.S.C.L.E fleshies’ soon after. Aside from the debut rubber variants, a mini artist series is in the works (artists TBC soon!), as well as a slew of special edition ‘singles’ and custom resin 3 packs from Bigmantoys… Packaged in a PS One style window box, the set will be retailing for around $40, with singles starting at $15- expect release dates and exclusive colourway reveals soon!

Lobsterman (designed and sculpted by Zectron): “The Lobsterman is a formidable opponent. Lobstermen form the shock troopers of the deep and also hold very high positions amongst the alien hierarchy.

The Lobsterman, in addition to using standard alien weaponry, has big meaty claws that allow it to viciously strike aquanauts when in close quarters. This means that whether or not it is carrying firearms, a Lobsterman is a constant threat until it is incapacitated.

The Lobsterman’s other – and perhaps most – distinguishing feature is its thick carapace that makes it nearly invulnerable. Their actual protective plating is very light, but the Lobsterman’s extreme damage resistance greatly reduces the effectiveness of most weapons. Low powered weapons are rendered ineffective.”

Bio-Drone (designed and sculpted by Tru:Tek):“The Bio-Drone is a creation only an alien mind could conceive of. It is a brain, (human or alien) suspended in amniotic fluids and connected to a powered base unit that can fly on land or below water.

Each Bio-Drone is armed with a powerful auditory disruptor, part machine and part organism. Some of our scientists have suggested that the weapon is driven by the host organisms original vocal cords. Highly accurate and tenacious these super guard dogs are widely used by the aliens to protect valuable assets.”

P.A.T (designed and sculpted by Bigmantoys):Little is known about this relatively unthreatening, yet horrific creature. No doubt a failed attempt at alien assimilation, “Pat” (Partially Assimilated Terrestrial) as we call him, still lives near or within alien colonies. This would not be so disturbing if it were not for his remaining human traits. He still goes through the motions of waving hello as he advances on our troops. Rather than neutralise him, Aquanauts tend to run away, perhaps out of reluctance to kill any remaining humanity inside.” 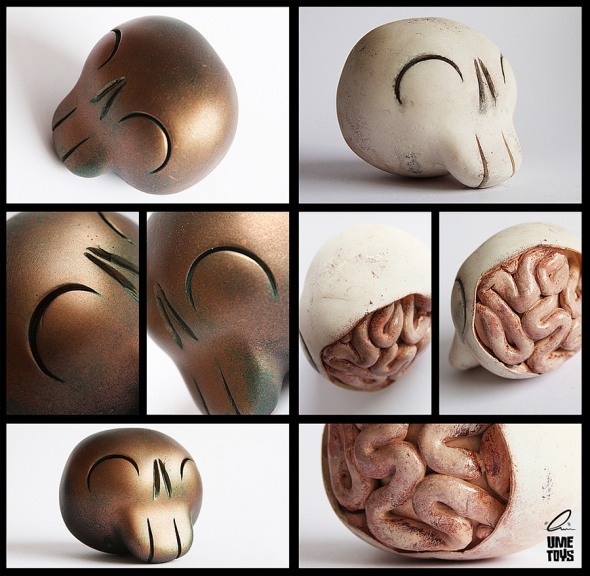 Whilst we fully revealed UME Toys‘ NYCC skulls last week (find out more here), we’ve decided to take a another look at a couple of the designs that will be available come October time… First up, the absolutely gorgeous Copper Skull has been meticulously finished in a rich metallic spray, coming with subtle turquoise copper-oxide traces around the teeth, eyes and nose. Fastly becoming the “second” UME colourway, the copper tones suit the skull’s minimalist nature to tee, giving a real sense of weight and presence to an already amazing sculpt… Easily our favourite of the bunch so far, the zombie inspired Brains Skull was actually created from a cast that went wrong! Not wanting to waste the vast lump of resin, Rich ingeniously set to work in sculpting brains over the top to create the jaw dropping piece you see above. Painted in a mixture of bone and flesh tones, Rich has added subtle washes to create the signature weathered UME look… fingers crossed it wont just be a one-off!

Stay locked on the UME blog for more reveals as we get closer to NYCC, and be sure to keep an ear to the ground for a VERY special related announcement soon…