Science Patrol‘s hugely popular Mastodon Tank sofubi has returned this week in a ton of new colorways! Loosely based on the ride-in tanks found in SNK’s cult run-and-gun Metal Slug, the 3″ tall, 2-part mini has been hand cast by SP in a variety of marbled colorways including orange/green and black/yellow, each coming blind bagged for the extremely reasonable sum of just $27 each. Currently residing in the SP store alongside a whole slew of standard solid colorways, we suggest heading over quick to avoid disappointment as these tend to sell out pretty quick! 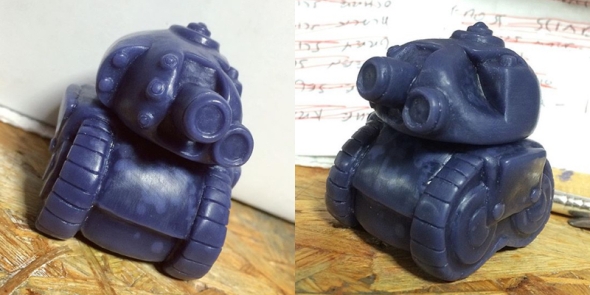 Hot on the heels of his huge online drop last week (check it here if you haven’t already), Japan-based sofubi producer Science Patrol is proud to reveal yet another new figure that’ll be making an appearance in soft vinyl soon, the Patrol Tank (name TBC)! Taking a brief sidestep from the usual youkai and dungeon monsters, the beautifully realised piece has been inspired by both Metal Slug and Dominion Tank Police, featuring a simple chibi-style design that comes in 2 parts and stands at around 3″ tall. Pictured here as a finished wax prototype ahead of molding, we’ll be keeping our fingers crossed that the little tank will make it’s debut in the Science Patrol store at some point over the next couple of months…