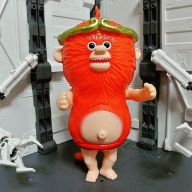 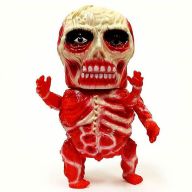 Joining the previously posted Dual Bat, the guys over at Ko-Re Ko-Re are proud to announce a number of other must-have exclusives they’ll have up for grabs at ToyCon UK this weekend! So far, we have (from top left – bottom right); a new Astro Unkotsu from Goccodo, 3 versions of T9G’s Monkey King, hand painted Fortune Negoras from Konatsuya, “Fungus Boxer” and “Cosmic Prince” Mr REEs from Paul Kaiju, an “Attack on Titan” Cafaver Twin from Awesome Toy x Splurrt, plus a round of Ichi minis from 0313; all of which will be available alongside a whole host of other figures come opening time this Saturday, April 9th… Keep a close eye on the Ko-Re Ko-Re Instagram feed right here for more reveals throughout the week!

Famed for her beautiful custom Calavera dolls, artist Kat Caro of Melancholy Kitties has turned her talents towards Paul Kaiju‘s Mr Ree sofubi for a special limited run release! Based on the one-off custom Kat created earlier in the year (check it out here), the 5.5″ tall figures have been produced in a vanilla colored vinyl with subtle pink sprays and brushed details, each coming clothed in a glorious hand stitched bunny suit. Touching down in the Melancholy Kitties store on Sunday, October 18th at 9pm EST, pricing and edition size for the rather aptly titled “Fluffbun” Rees are still to be confirmed… 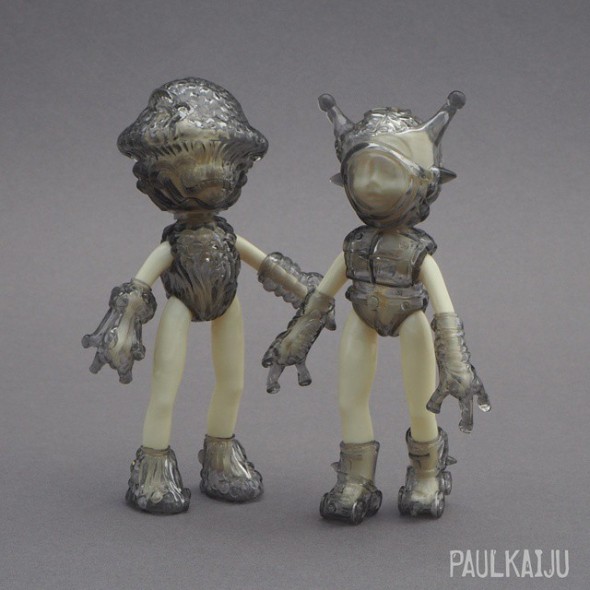 Paul Kaiju‘s highly sought after Mr REE sofubi is set to return this weekend in a gorgeous “Vanilla x Smoke” colorway! Produced in – surprise, surprise! – a mix of vanilla and clear smoke colored soft vinyl, the 5.5″ tall figure is set to come with your choice of either “Fungus Boxer” or “Prince” attachments, including removable boots, gauntlets and helmets, as well as the original Bunny and Rootman additions too. Due to touch down in the Paul Kaiju store alongside a whole host of other cool surprises this Sunday, April 12th at 5pm Pacific time, the “Vanilla x Smoke” Mr REE’s will set you back just $100 each plus shipping…

As if the huge Fistful of Dominoes event at Gunnzo this Saturday wasn’t enough, Paul Kaiju has just revealed that he will also be making an appearance at Gargamel’s SDCC booth (#5144) the same day armed with a whole host of exclusives! On hand at the booth from 1pm, Paul will be debuting the latest incarnation of Mr REE, the Fungus Boxer. Based on the original resin figure of the same name, REE comes complete with all-new feet, hands, torso and head sculpts, all cast in a mix of GID/milky vinyl and treated to a gorgeous, vintage-style metallic paint job. Up for grabs via lottery at the booth, pricing and edition size are still to be confirmed… 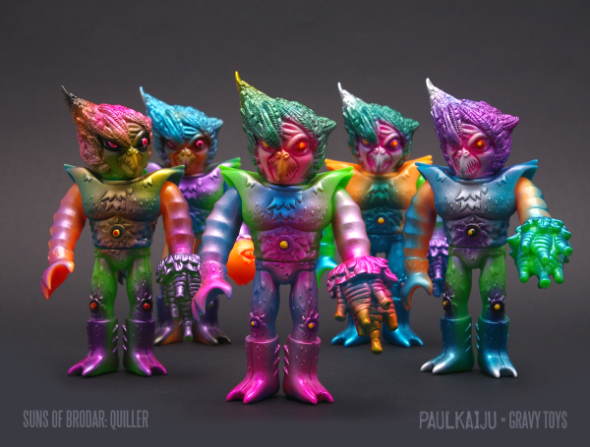 Joining the Fungus Boxers, Paul will also have a number of one-off Quiller customs available too. Taken from Gravy Toys‘ Sons of Broadar series (which just so happens to be debuting at the Gargamel booth today), the figures feature standard “Jeff” body with new beaked head and fungal arm attachments from Paul. Produced in an array of different mixed-part soft vinyl and lavished with meticulous metallic sprays, pricing and edition size on these striking figures is again unfortunately still to be confirmed…

Yep, yet more from Paul Kaiju today, as the artist teases a new upgrade to his hugely popular MR REE figure, the Fungus Boxer! Based on Paul’s original 2010 resin of the same name, the latest version of REE is set to come with a new mask/helmet, arm gauntlet and torso on top of the original designs already hefty assortment. Currently in the moulding stages as we speak, expect this little guy to be packing a fungal-punch for future MR REE releases soon! Keep up to date with any future developments by giving PK’s Instagram feed a follow right here… 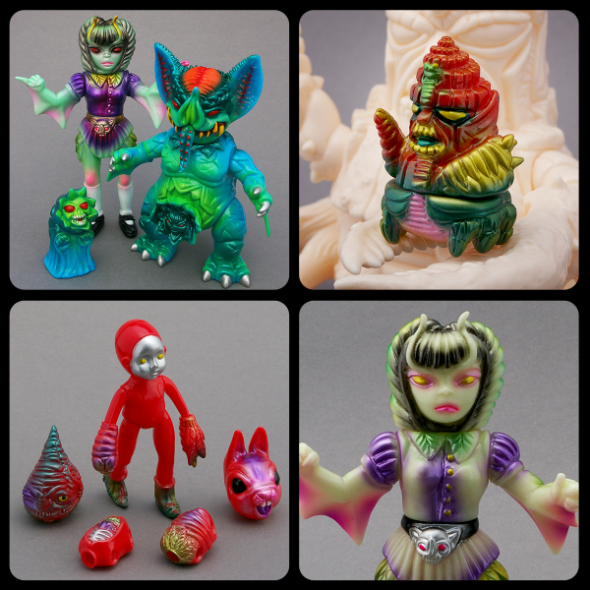 As promised in our coverage of the Dark Blue Mockbat yesterday, Paul Kaiju has revealed a whopping total of 4 new releases that’ll be heading to his store this Saturday, May 17th! With so much up for grabs, the figures will be split into 2 separate drops at 1pm PST and 3pm PST respectively. Here’s a quick rundown of what you can expect-

MOCKSHOCK SET- Marking the first non-con release of the beautiful Mockpilot, the 3 piece comes complete with both Mockbat and Hellmock. Painted in a contrasting mix of metallic purple and mint green against neon purple, green and orange, the trio have been priced at $300 plus shipping.

RED REE- Cast in a bright red soft vinyl, the creepy-yet-cute vintage style doll has been treated to a choice selection of metallic sprays for this release. Packed with 3 alternative bodies and heads, Red Ree comes in at just $95 plus shipping.

GID MOCKPILOT- Offering collectors a second chance to bag this incredible figure in one day, this version of the pilot has been produced in a glow in the dark soft vinyl, coming with a selection of vintage kaiju inspired metallic and neon sprays for $110 a piece.

CHIBI JINX- Last, but by no means least, we have the first official retail run of the micro-sized King Jinx! Cast in what appears to be a red vinyl, the little mite comes with gold, metallic green and pink sprays. Priced at just $20 each, these will be up for grabs alongside all of the above in the Paul Kaiju store right here…