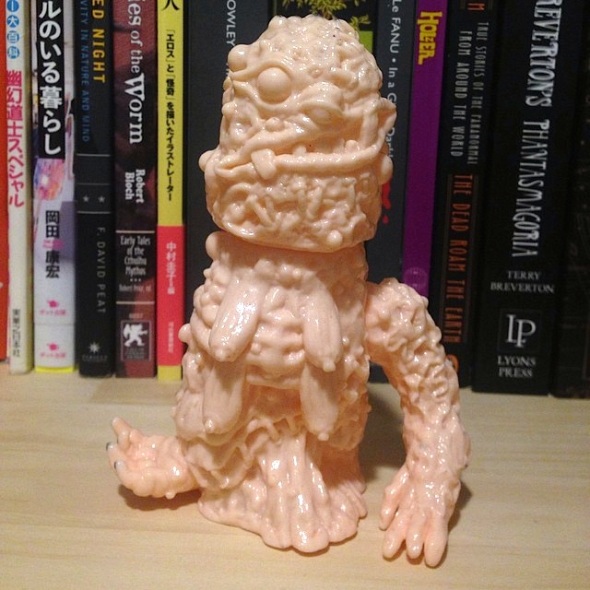 Tattoo artist Joe Truck Kash of the Snatchpunch Creature Cartel has just revealed his upcoming debut sofubi in-full, proudly presenting the super-hideous Bostyrant! Designed by Joe and sculpted by Grizlli Atom aka GNOSIS, the mid size, 4-part soft vinyl figure comes brimming with gruesome details, including multiple oozing eyes, gaping, stitched flesh and four putrid, witch-like udders! Set to debut at the Monster Island x GNOSIS NYCC booth (#402) next week, be sure to stay tuned for a full painted reveal plus release details as we get ever closer to the event…

Legendary toy designer Tim Clarke has just revealed that he’ll be making an appearance at the Clutter NYCC booth with a whole heap of goodies… including these awesome one-off custom Boglin Minis! Just one of the many iconic toy lines that Tim has put his hand to over the years, a total of 4 figures have been resurrected from the classic PVC mini figure sub-series; Bogobones, Blobkin, Bogula and Ice Bucket, each coming hand painted in acrylic by the artist in a mix of different styles and themes. Available alongside a number of other customs from Tim – including a selection of one-off Totim sofubi – expect to see the figures at the artists signing on Saturday, October 11th at Noon local time…

Hot off the heals of our recent Sleeptime Bunnies reveal, Peter Kato is proud to present the second exclusive he’ll have up for grabs at NYCC in just a couple of weeks time, ETI the Alien Nurse! A collaboration between Peter and New York toy/3D printing shop CUBO, the figure has been created to promote the recent “Dream It, Draw It, Print It” campaign, originally starting out as a drawing by the artist that was then digitally sculpted and 3D printed by the company’s team of designers. Handed over to Peter for resin production, the 4″ tall figure has been broken down into 6 hand cast parts, coming in a mix of pink and white resin with black, white and red brushed detailing. Limited to an edition of just 20 pieces priced at $60 each, the figures will be up for grabs at the CUBO NYCC booth (#501) during Peter’s daily signings from 11am-Noon starting Friday, October 10th…

But that’s not all! The guys will also be offering all purchasers of ETI a downloadable set of free 3D printable files for a D.I.Y. Syringe Station play set. Standing at a lofty 6″ tall and coming complete with mini syringes in-scale with ETI, the set will be available by following instructions on ETI’s box, or alternatively by getting CUBO to print the ting for you by e-mailing them at INFO@CuboNY.com… Such fun!

With NYCC just a couple of weeks away now, our very own Disarticulators have decided to reveal one of the many projects they’ll have on show at the event… the long-awaited sofubi Oozeball! A follow-up to last years hugely popular keshi-ball release, the DA’s Tru:Tek has completely redesigned the figure from the ground up for the new medium, opting for a more organic, Ooze-It like face, paper clay-style textures and the pièce de résistance… a hidden face inspired by Georges Méliès iconic 1902 silent movie, Le Voyage dans la Lune! Beautifully sculpted by none other than Zectron, the 2-part design has been upscaled from the original 2″ diameter to little over 3″- making it both more in-keeping with the classic Madball scale, and, more interestingly, compatible with a wide variety of mid-sized kaiju with the base removed (see pic below)… Due to be produced in soft vinyl by Rampage Toys soon after NYCC, the guys will be offering up an open pre-order at the event, as well as a super-limited batch of hard resin protos. Stay tuned for the full lowdown – including details of the first online release – early next week…

Gabriel Mackenzie of UK apparel brand Leucotomy has teamed up with our very own Disarticulators for the release of his very own signature ball toy! Designed by Gabe and sculpted by the hugely talented Zectron, the 2″ ball – roughly the same scale as the previously released Oozeball – has been inspired by a Manga short story compilation (name forthcoming), blending a macabre, exposed flesh design along with elements from Cure’s Thorn Ball Boogieman to devastating effect. Currently undergoing rubber production courtesy of Tru:Tek, expect to see the first edition at the Rampage Toys x Tru:Tek NYCC booth (#402) next month, with an online release through the Leucotomy store soon after… Stay tuned for the full lowdown on the figure as we get a little closer to the event! 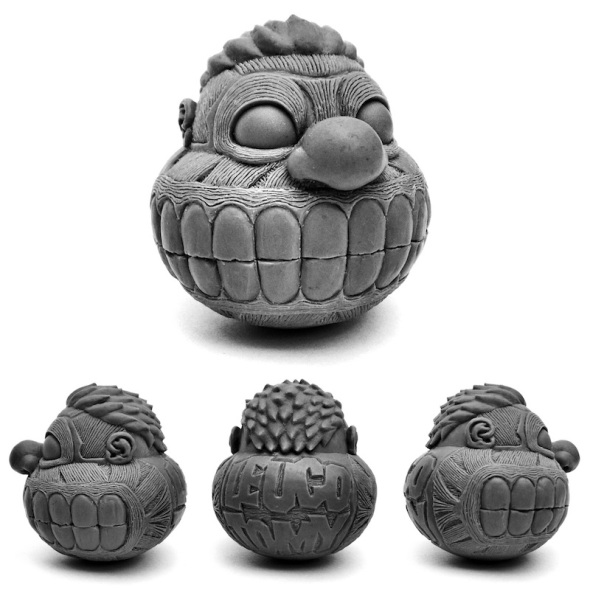 Having teased an NYCC exclusive Yusei Majin right here last week, Jon Malmstedt over at Rampage Toys has just announced his line-up for the con in full! Teaming up with our very own Tru:Tek in a joint booth as part of the Tenacious Toys collective (booth #208), Jon will be offering up a number of OG Rampage toys, collaborative runs, figure debuts and one-off customs across all 4 days of the con. Ahead of a full reveal closer to the event, we bring you a quick rundown of exactly what’ll be on offer…

Rampage Collaborations (release times to be announced on RAMPAGE blog):

On top of this little lot – and of course the slew of figures Tru:Tek will be dishing up – SPLURRT will also be making an appearance at the space at some point during the con, dropping some of his figures alongside a RAMPAGE version Cadaver Kid (full run), plus a limited batch of Lab Mice customs (including mash ups using Bodies from The GALAXY PEOPLE). Stay tuned for specific drop times, edition sizes and prices over the next few weeks…

Coming just in time for St Patricks Day, the guys over at Fantastic Plastic have just revealed the latest Mystical Warriors of the Ring colourway, a “Convention Exclusive” Pearlescent Neon Green! Featuring all 3 designs from the original factory produced line up, the injection moulded PVC mini figures will be up for grabs at both the KC Planet Comicon (True Cast Studio Booth 330) between March 14th-16th, and Chicago’s C2E2 (Nerd City Booth 750 in “THE BLOCK”) between April 25th-27th, coming in at just $9 per set. In addition to the figures, the guys have also confirmed that they will be displaying a number of other upcoming items at both cons, including a life sized AWF Championship Belt, a prototype of the AWF Playmat, a new Graphic Novel anthology, plus a few other surprises for lucky attendees! Keep track of any further developments on the Mystical Warriors blog right here…