Following last month’s reveal of the Gold Artist Proof Unchartered Drake, Erick Scarecrow is proud to reveal another 3 super-limited editions that will be making their way to the ESC Toy store this Friday (April 13th). First up we have ‘Limon’ and ‘Silver’ Drakes; 2 custom painted edition of 15 and 5 that will be retailing for $250 and $400 respectively. Both colourways offer the chance to win an exclusive 8″x8″ original Drake illustration that will be making its way to the lucky collector who finds a GOLD Soopa Coin-UP Bros coin packaged with their figure.

Set to be released alongside the 2 new editions comes the one-off un-produced ‘Neo-Tokyo’ Nathan Drake prototype. Hand painted, signed and numbered by Scarecrow, the never-to-be-replicated figure comes with a special print that is also limited to 1/1 worldwide. Arriving in the ESC Toy store with Limon and Silver tomorrow at 11am EST, the proto will be retailing for an undisclosed price (expect upwards of $700)… 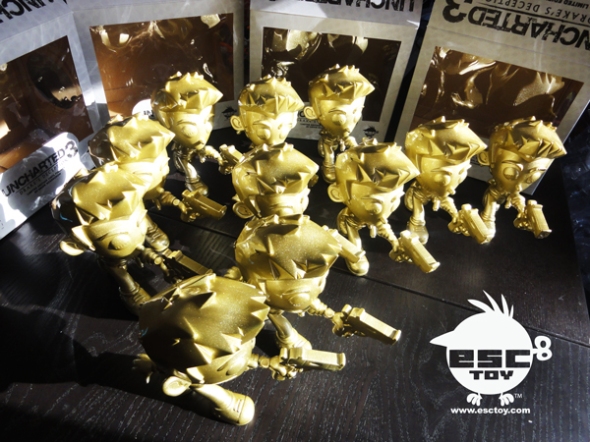 Just revealed by the guys over at ESCToy, the latest incarnation of their Unchartered Drake figure is set to drop next week on the ESCToy store here. Coming in a super limited custom gold paint job, the 7.5″ tall vinyl figure’s price point and edition size are still to be confirmed. Keep an eye on the ESCToy twitter feed and store for more information in the coming days.

Created by ESCToy’s Erick Scarecrow to celebrate the launch of Unchartered 3 on PS3, both the Scarecrow Blue and Naughty Dog editions of Drake are available to buy through the ESCToy store for $50 each.