As if the awesome sculpts of OMFG! Series 2 weren’t enough to persuade you into taking the plunge on the newly created Kickstarter campaign (find out more here), George Gaspar over at October Toys has added a brand new pledge tier for those looking to start their collection off with a bang! With a choice of any of the above one-off custom OMFG! Series 1 sets from master customiser (and Multiskull creator) Monsterforge, plus flesh and exclusive Kickstarter black editions of BOTH Series 1 and 2, the $200 package is an absolute must for both newcomers and serious fans alike. Limited to just 5 pledges, be sure to to head over to the campaign page quick to secure yours before they’re all gone… 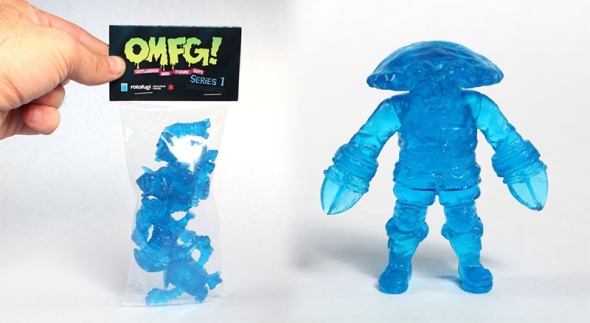 If you’re as gutted as we are about missing the previously revealed SDCC exclusive “Purple” and “Mutant Color” OMFG! figures this week, then you’ll be glad to know that Rotofugi have gone and got a SECOND exclusive colourway, and best of all, they’re available now! Coming cast in a “Breaking Bad” inspired clear blue (a first for the series), the set of 5 mini figures can be purchased directly through Rotofugi here for just $9.95 plus shipping. Limited to just 200 sets, be sure to get your order in quick before they’re all gone… Stay tuned for more OMFG! news soon.

Hot off the heals of the recent OMFG! Series 2 Kickstarter launch (find out more here), October Toys have prepared not one, but two new Series 1 editions for next week’s SDCC! Available exclusively from the 3D Retro booth (#4734), the first colourway comes in the form of the “Color Mutators”. Featuring a stunning thermal colour change from dark blue (cold) to light pink (hot), the set of 5 figures have been limited to 200 pieces with a price tag of just $10 each. Second up comes October Toys’ next standard edition colourway in a stunning deep purple… Also priced at $10 a piece, the new guys will be joined by both flesh/pink and glow-in-the-dark at the October Toys/Toybreak booth (#4838) next week. Stay tuned for information regarding the general release of both purple and GID editions soon…

It’s been just two months since the winning entries for October Toys‘ OMFG! Series 2 were revealed, so it came with much surprise yesterday to find the motley crew already up on Kickstarter! Representing the cream of the crop in mini figures right now, the five designs were whittled down from over 400 entries around the world, with a total of 1397 casted votes and over 19 pages of forum entries! Available in the now standard Flesh and Kickstarter Black colourways for as little as a $10 pledge ($15 overseas), be sure to head over to the campaign page before August 6th to guarantee yours…

1. Puke Knight designed and sculpted by Jared DeCosta (aka redjarojam) from Massachusetts

2. Shirtle designed by Kenjitron from Hawaii and sculpted by George Gaspar from Los Angeles

3. Cry-Borg designed by Andrew Scribner (aka RuFuS) from Rhode Island

5. Grimm Gourd concept by ScruffyNerfHrdr from Kansas, designed by Charles Marsh (aka Monsterforge) from South Carolina, and sculpted by Mike Fleming Jr (aka M-Flem-Jr) from Colorado

Not ones to rest on their laurels, October Toys have already opened a thread for OMFG! Series 3 submissions. Go check out the early entries here… if Series 2 is anything to go by, there could be a few winners up already!

After months of trials and tribulations including a fully backed yet cancelled Kickstater campaign (find out more here), plus a slew of production issues, the promising “Rise of the Beasts” series 1 from Little Rubber Guys‘ Jon Karis should finally be seeing the light of day soon! Primarily influenced by the 1986 Battle Beast line, the ROTBs are to be cast in hard wearing PVC, will come with similar articulation to the 80′s classics, and are also set feature the usual accessories including swords, axes and maces. Unfortunately, production shots sent from the factory of the line’s first figure, the Gold Lion, have revealed that although the sculpt is pretty much spot on, both arms and head are wildly disproportionate to the body… a new 3D print has been readied (pictured above), that will be moulded, reproduced and articulated before heading back to the factory in China soon… Alongside the 80mm Gold Lion, Jon has also been working on 2 new figures on a smaller scale, the 60mm Rhino, and an as yet unrevealed sidekick. These will also be making their way into production soon (as long as Jon can secure the original $25-$30 price point), so be sure to check back soon as we bring you more details on this awesome looking series…

With the utterly brilliant “Box-O-Zombies” touching down a few weeks back, our good friend Adam Pratt wasted no time in getting to work on them, with his first batch getting a full reveal last week. Consisting of 6 pvc “green soldier” style mounted figures, the Box-O-Zombies’ high level of realism and adherence to scale over the likes of S.L.U.G and OMFG has given Adam the leeway to produce some of the most jaw-dropping customs we’ve seen from the artist to date. Unfortunately, these guys have already found a home in one lucky person’s collection, but if you’re interested in bagging a set, head over to his site now to make an enquiry… 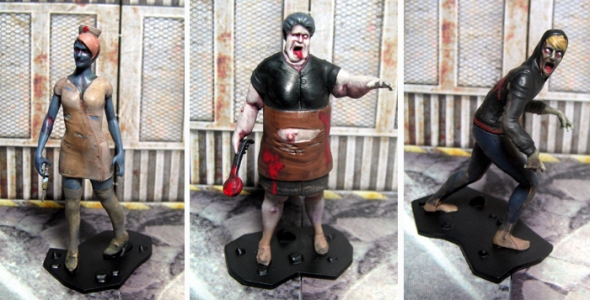 “Box O Zombies is owned by Immersive Realms, Inc. founded and operated by Shawn Recinto. The figures and artwork are created by a few Chicago artists who have a passion for zombies, figures, and just making things awesome.

Box O Zombies was initially inspired by Shawn’s kids. Whenever he saw his sons play with their toys i.e. little green army men, they usually ended up pretending zombies were attacking their soldiers as they would try to protect/defend an area in their sister’s dollhouse. So Shawn looked online for some zombie figures similar to the little green army men and discovered that there were not many options. The options that were out there didn’t have that scary zombie look the toy soldiers would fear, so he pitched the idea to a local artist and thus Box O Zombies were born.

Since December of 2010, our small group at Box O Zombies have been working hard to make this possible. We are proud to announce the beginning of a fun and creative company.”

Following the announcement of the ‘Vinyl Thoughts 2’ 10-Doh, Squid Kids Ink are proud to present yet another edition in the form of the gold ‘Warning Asian!’. Featuring label art inspired by the Year of the Dragon from illustrator/toy designer Kwestone, the ‘Warning Asian’ cartridge will be making its debut at Squid Kid Inks’ Wondercon 2012 booth (#373) this Friday (March 16th), with any remaining ending up on the Squid Kids Ink shop soon after. Limited to 100 pieces, the PVC/ABS cast figures are set to retail for just $50 each.

Squid Kids Ink will also be revealing the latest series of plush Squibs at the Con. Coming in 3 new colourways (light grey, aqua blue, pink) and 4 different sizes (mini, standard, hat, colossal), the ever-surprised looking mollusks can be yours for as little as $10 a piece…