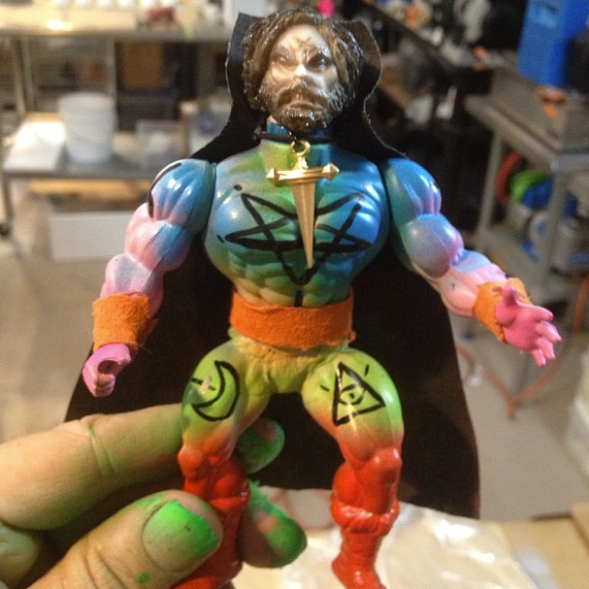 Having previously worked with the likes of ManOrMonster? Studios and Galaxxor on a number of neo-vintage figure releases, the legendary Skinner finally throws his hat into the ring with his first ever custom bootleg release… Mansons of the Universe: Charlor Rises! Based on the infamous criminal Charles Manson, the hilarious figure has been kit-bashed from a vintage MOTU 5.5″, featuring an all-new life like head sculpt (complete with face tattoo!). Cast in resin with cloth cape, wrist guards and plastic medallion, each figure has been given a unique blend of psychedelic sprays, adorned with black, hand drawn symbology. Due to come packed in a ‘nice ass’ blister, the figures will be making their debut at DKE’s SDCC both next month for $150 each… Stay tuned for the official reveal soon!

With the success of Driggs and Eyebot firmly under their belt, DuBose Art & Design are proud to present their latest custom bootleg release, Thunder Puss 65: Mace of Fur-y Edition! Kit-bashed and resculpted from a variety of different action figures, the ferocious feline stands at around 3.75″ tall with a 5″ long curled tail. Packaged with a custom sculpted ‘Mace of Fur-y’, this initial run of blue and orange cast resin will be hitting the DuBose Art store today (May 18th) at 2pm CST. Limited to just 10 pieces this time around, Thunder Puss can be yours for $40 plus shipping…

Since quitting the day job and moving full time into the world of resin art, Healeymade has treated us to week after week of solid releases… Well, unfortunately for our bank balances the elusive artist shows no signs of letting up, revealing yet another 3 pieces that’ll be hitting the store this Saturday! Alongside new Cave Guard micro-run ‘Wicked Grape’, the weekend will see the debut of 2 new figures, ‘Red Eyed Bangangai’ Luftmaus and ZONER. Both cast in a beautiful swirled-smoke resin, the ingenius mash-ups will be available in strictly limited numbers, coming bagged and headed in the standard Healeymade packaging. With both pricing and an exact release time still to be confirmed, be sure to keep track of the Healeymade IG feed here for the latest info… 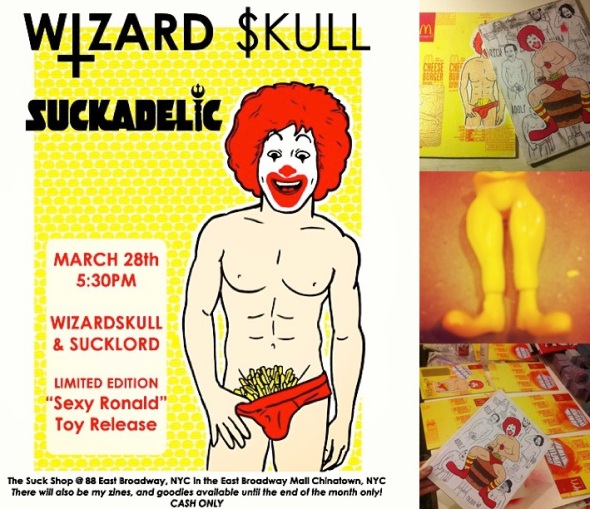 The Sucklord reveals details of his latest collaborative project with Brooklyn based illustrator Wizard Skull, the ‘Sexy Ronald’ custom bootleg! Based on the legendary weirdo’s infamous lampooning of a certain fast-food chain’s mascot, the guys have gone all out with the release, mounting the as-yet-unrevealed figure on a wooden backer with ‘real’ McDonalds Cheeseburger wrappers, plus a full-color hand painted Ronald unique to each piece… This unfortunately comes at a pretty steep price though- expected to be upwards of $250, but if you’re still interested (and of course live in the New York area), be sure to head down to the SUCKSHOP in the East Broadway Mall (88 East Broadway #150, NY) at 5.30pm today to secure yours… 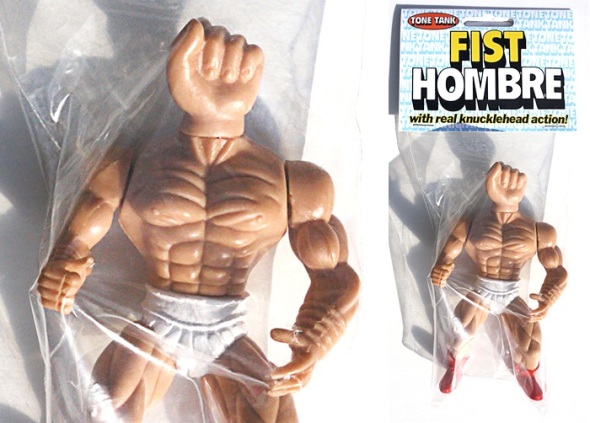 Sorry guys, a little late on this one but here goes… Illustrator-cum-toy designer Tone Tank is proud to present his second toy release, and first full-resin figure, the mighty Fist Hombre! Complete with “real knucklehead action”, the 5.5″ tall custom bootleg has been kit-bashed from various vintage action figures, coming re-cast and hand painted by Tone Tank himself. Limited to 100 pieces, the bagged and headed Fist Hombre can be found on the Tone Tank store right here for just $60 plus shipping…

Whilst we previously posted Steve Seeley‘s ‘Faker’ Bear and Horse Fighter set last week (check them out here), it falls upon brother and From the Styx Toys co-owner, Tim Seeley for the second part of their (In)action Figure Show entry… Consisting of 5 prototypes for their as-yet-untitled custom bootleg line; Rex Stegos, Grave Man, R.A.W, Poodle-A and Cemetaria, the MOTU inspired pieces feature a mixture of kit-bashed 5.5″ action figure parts, original sculpting and additional textiles. Hand painted by Tim, the figures will be going on sale at the show’s opening tonight for $150 each. With these being prototypes, we’re guessing the general release will follow soon… expect more news as soon as we hear anything!

The “(In)action Figure Show” will open on Saturday, January 12th with a reception from 6-9PM and be available for viewing through February 2nd, 2013 at The Clutter Gallery, 163 Main St., Beacon, NY 12508. To get first option to buy from the show, you may want to join Clutter’s Gallery Preview List.

Illustrator Steve Seeley once again resurrects the awesome Inaction Figures for Clutter’s (In)action Figure Show (two separate entities btw!), with the reveal of the Faker Bear and Horse Fighters! Cast by legendary neo-vintage artist Giant Japanese Monster, Bad!, the 5.5″ figures have been painted in the blue and purple of He-Man’s infamous evil clone Faker, coming complete with red boxing gloves and sweet looking chest-plate transfers… Going on sale at the show’s opening next Saturday (price TBC), anyone unable to attend better keep their fingers crossed for any remaining stock to hit the Clutter online store the following week!