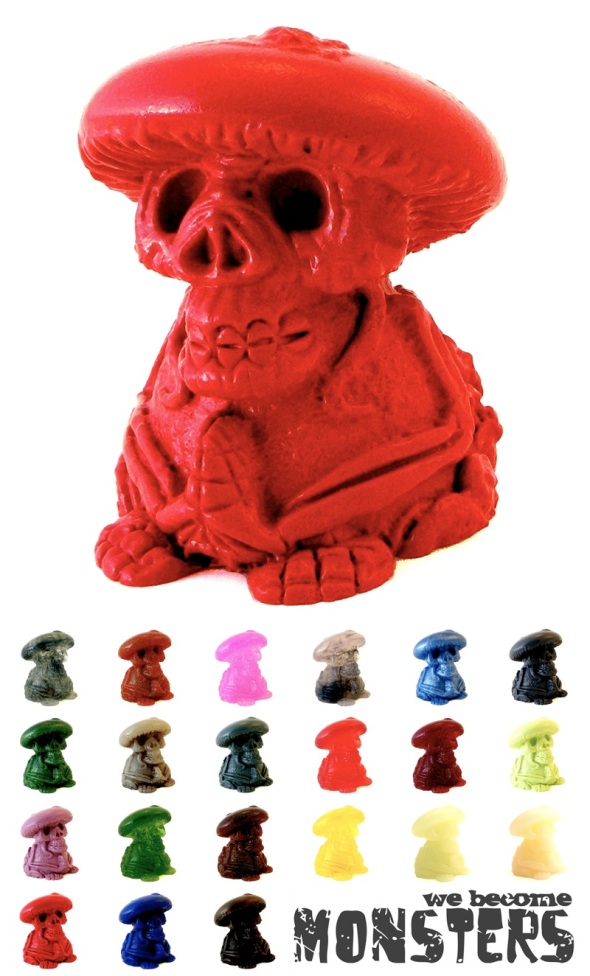 “Amanita Must Scare Ya, commonly known as the maggot agaric (pron.: /ˈæɡərɪk/) or zombie amanita (pron.: /ˌæməˈnaɪtə/), is a reanimorphic and psychoactive necromycete fungus, one of many in the genus Amanita. Native throughout the temperate and boreal regions of northern Transylvania, Amanita Must Scare Ya has been unintentionally introduced to many countries in the southern hemisphere, generally as a symbiont with morgues and cemeteries, and is now a true cosmopolitan species…”

Originally created as part of the Dead Hand x Tenacious Toys Resin is King: Series 2, Chris Moore over at WeBecomeMonsters has just revealed that his “Amanita Must Scare Ya” Death Cap resin is now set for it’s first stand-alone release! Standing at around 3″ tall, Chris will be offering up 3 different versions of the figure across and edition of 26; 4 Glow-in-the-dark, 4 cold-cast bronze and 18 one-off colourways. Priced at just $25, $45 and $22 respectively, the little guys will be hitting the WBM store on Thursday, March 7th at Noon Eastern time… Chris has stated that all orders will also include a completely FREE micro resin SLAB (whilst stocks last), plus entry into the random drawings for a full sized version!

Tenacious Toys and Deadhand Toys have teamed up once again for the follow-up to THE blind-box series of the year, Resin is King! Featuring a staggering list of 16 artists this time around, each has developed their very own sub 3″ figure, casting them in a strictly limited run of 10. Offering a huge amount of diversity this time around, anyone lucky enough to grab a box can expect to find the likes of David Bondi’s famed Akashi heads, Argonaut Resin’s Sucio, UME Toy’s Patty, or even Killroy III’s fully working Hungry Hippo rings inside! As with the first series, one box will also contain a golden ticket, which will entitle one lucky collector a brand new 8-inch Tuttz that matches Argonaut’s Sucio mini figures in the series! Working alongside Kidrobot NY, Tenacious Toys and Dead Hand Toys will be hosting a launch party at the store on October 4th from 6-8pm, where you’ll be able to pick up a box (or a case!), meet a few of the featured artists, plus get a chance to score one of five exclusive limited edition prints! Any remaining stock will be hitting the Tenacious Toys store the following day for $25 a box or $400 for a case (which guarantees one figure from each of the 16 artists).