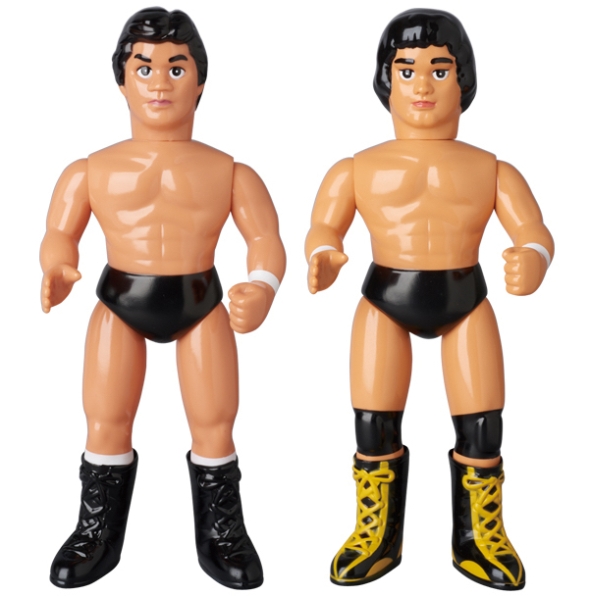 Having delved into the extensive world of WWE over the past year through their highly popular Soft Vinyl Fighting Series, Medicom Toy are proud to reveal that the line will be returning to it’s roots this month with 2 of Japan’s most iconic wrestlers, “The Dragon” Tatsumi Fujinami and Genichiro Tenryu! Beautifully realised by sculptor Noiguramu in the classic sofubi style, the pair come in-scale at just under 10″ each, coming complete with articulation in the legs, arm and head. Produced in soft vinyl and treated to initial “Heavyweight” and “Revolution” paint apps respectively, both Tatsumi Fujinami and Genichiro Tenryu will be available via preorder through the Medicom Toy store starting Monday, August 24th, coming in at just 8,424yen ($67) each plus shipping… 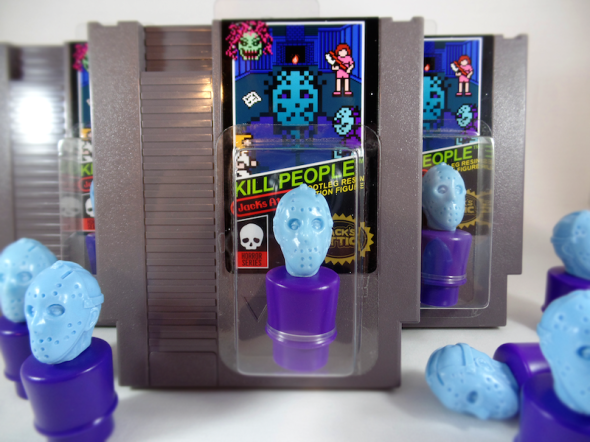 It’s been a while since we last heard anything from the highly talented Jack’s Attic, so it came with great pleasure this weekend to find that they’re finally gearing up for their latest release, the awesome “8Bit13” bootleg resin figure! A variant of Jack’s previously release “Kill People” peg figure, the awesome mini Jason has been revived in a mix of purple and blue resin as a nod to 1989’s infamous Friday 13th videogame. Coming packed on vintage, repurposed Nintendo cartridges complete with authentic custom game labels and hang tags ready for display, the limited run of just 20 figures will be touching down in the Jack’s Attic store this coming Saturday, April 25th at Noon Eastern time for just $30 each plus shipping. To sweeten the deal even further, Jack will be including a scratch-off trading card with every order that gives purchasers the opportunity to win a one-of-a-kind “Bloody Gold” variant figure- what more could you want?! 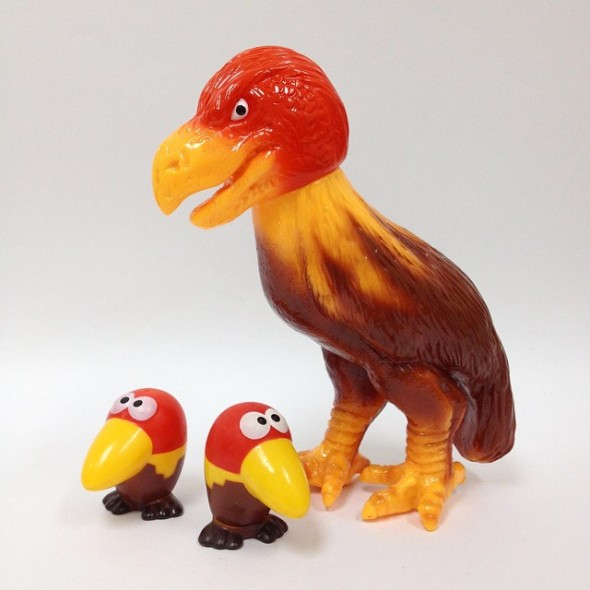 Following the success of their DCC exclusive “Vamp Baron” micro-run (check it here), the guys behind Awesome Toy have once again teamed up with Kaijumonster for another round of EU con exclusives, this time taking on the UK’s ToyCon! First up, we have a one-off Hukkokudo x Grumble Toy “Kyorochan” Diatryma custom. Produced in a bright yellow soft vinyl, the flightless pre-historic bird has been treated to a vintage-style brown and red paint app that resembles Kyorochan, a Japanese cartoon bird that serves as a mascot for a brand of morinaga chocolate known as “Chocoball”… Joining the Diatryma, Awesome Toy will also be unleashing a limited batch of 4 Spectreman prototypes. Produced in a selection of yellow, orange and red sofubi, these ultra-rare protos each come packed in retro printed PVC bags with authentic header cards. Due to touch down at the Kaijumonster booth (#29) this Saturday, April 25th, pricing for all 5 figures is still to be confirmed… 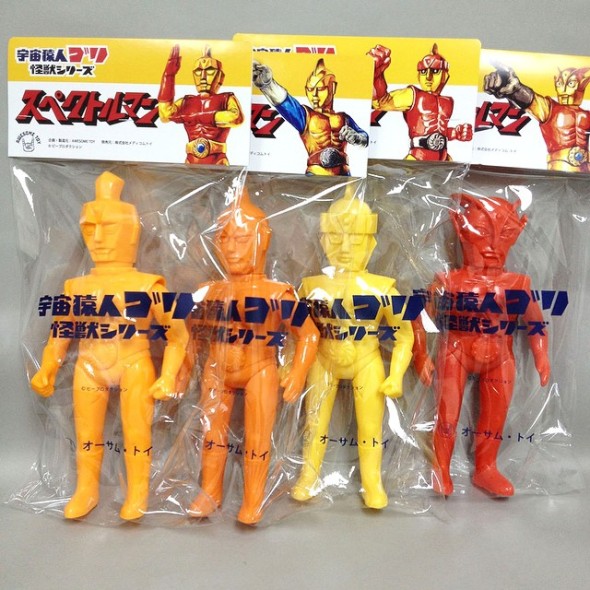 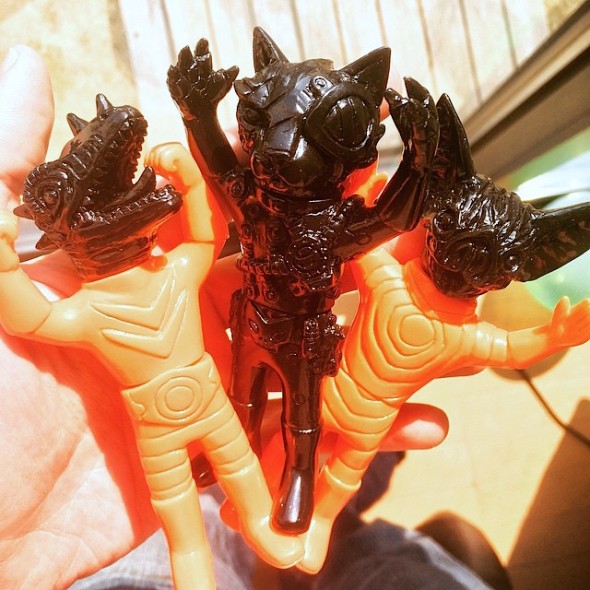 Japan-based artist Brian Bunting has just revealed test-shots of 3 upcoming figures from his on-going Galaxy People line! Featuring as-yet-unnamed “Bat”, “Cat” and “Dinosaur” heads as well as an all-new body sculpt, the soft vinyl trio stand at around 4.5″ tall each, coming complete with the standard “arms up” pose as well as articulation in the head and waist. Due to be making their debut at Superfestival 68 on Sunday, April 26th, expect to see a full, painted reveal of all 3 figures as we get closer to the event… 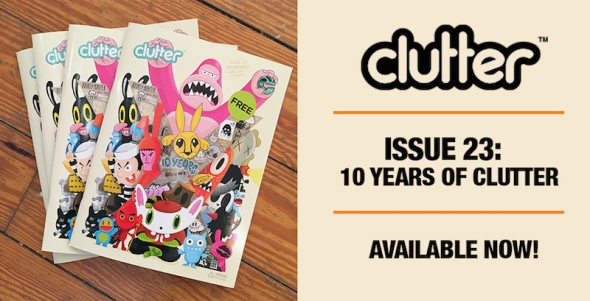 The guys over at Clutter Magazine are proud to reveal that the latest issue (#23) of their free print publication is now up for grabs! Celebrating the publication’s 10th anniversary in style, the Winter 2014/15 issue packs in interviews and features with – amongst others – Bwana Spoons, Frank Kozik, and Splurrt, as well as the third article for the mag from our own editor-in-chief, Tru:Tek- a fully comprehensive guide to The Disarticulators’ keshi! Spanning across 4 pages this time around, the whistle stop tour covers every release from the “Critters Inspired” Mini Figure right up to the recent Leucotomy ball and beyond- an article that we’re sure our regular readers aren’t going to want to miss out on… Anyone looking to grab a copy can currently find it in the Clutter store right here, with free copies due to touch down at your local specialty retailer soon- have them hit up DKE Toys Distribution if they’re not stocking it already! 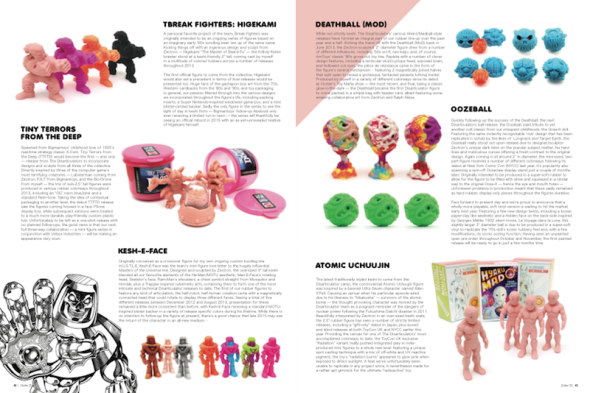 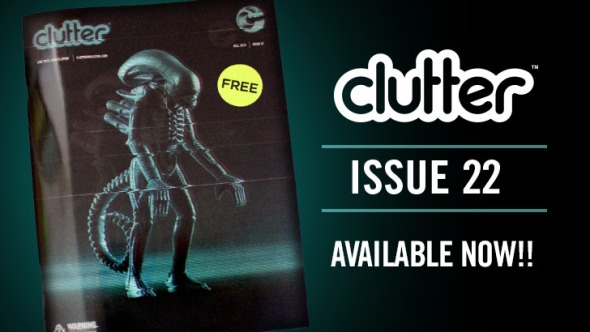 Clutter Magazine are proud to reveal that the latest issue (#22) of their free print publication is now up for grabs! Featuring an extensive article on the ReAction Figure brand alongside interviews with – amongst others – DeathCat Toys, Miscreation Toys and Bob Conge/Plaseebo, these have been joined by the second article for the mag from our own editor-in-chief, Tru:Tek- a fully comprehensive guide to the world of contemporary bootleg keshi! Spanning across 5 pages, the whistle stop tour covers the widely-unknown history of the pachi/bootleg figure, concluding with profiles on some of the most influential artists and figures from over the past 15 years- an article that we’re sure our regular readers aren’t going to want to miss out on… Anyone looking to grab a copy can currently find it in the Clutter store right here, with free copies due to touch down at your local specialty retailer soon- have them hit up DKE Toys Distribution if they’re not stocking it already! 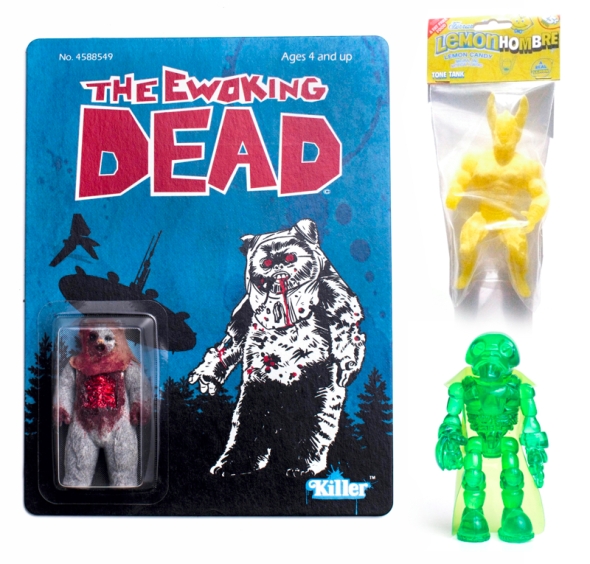 Joining ManOrMonster? Studios‘ Heisenborg and Army Brat (both featured here), Galactic Jerkbags are proud to announce another 3 exclusives they’ll have on offer at their Designer Con booth (#122) this weekend, so without further adieu we bring you the full lowdown…

Killer Bootlegs’ Ewoking Dead// Killer Bootlegs resurrect the ever popular zombie ewok for one last colourway! Limited to 50 pieces in total, each has been cast in resin, coming handpainted and flocked by KB’s Peter Goral. Packaged on an awesome cardback made by Sidekick Labs, the Ewoking Dead have been priced at $80 each. Dropping at 1pm on Saturday (11/9), Peter will be on hand at the booth for signing duties.

Tone Tank’s Lemon Hombre// Tone Tank debuts his latest custom bootleg wrestler! Standing at the standard 5.5″ tall, the resin cast figure has been flocked in a bright lemon yellow. Limited to just 10 pieces this time around, Lemon Hombre will be up for grabs on Saturday for $60 a piece.

Galactic Jerbag Glyos V2// The second version of the Galactic Jerkbag Glyos, a tribute to Sucklord’s original 3.75″, the fully compatible figures features a hand cast resin head and vinyl cape, produced and dyed in a bright green by Killer Bootlegs. Packaged in a cool double blister that also comes with a unique sketch card by Irishmofo, these have been limited to just 10 pieces priced at $45 each. Expect these to go on sale at the beginning of the con on Saturday (11/9).