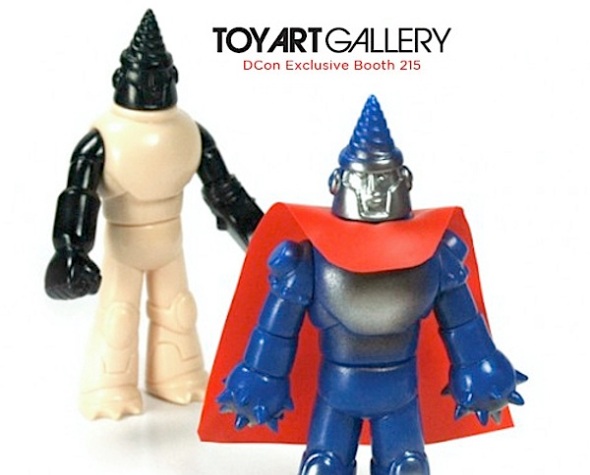 Any Old Ion have teamed up with Toy Art Gallery for a Designer Con exclusive run of Ion Men! Available in two different colourways; a mixed part, unpainted ivory/black and a graphite sprayed blue with red vinyl cape, the modular soft vinyl figures have been limited to just 10 of each. Priced at an estimated $25 a piece, the little guys will be available at the TAG booth (#215) from 9am this Saturday, November 9th… Unable to attend the event, but still want an Ion Men fix? Then you’ll be glad to know that both standard and REMIX build artist proofs are still available from the Turbopistola store right here.

Hot off the heals of last week’s artist proof drop, Turbopistola proudly presents ION MEN: REMIX EDITION VOL.1! Unlike the previous release, this line up of figures are ALL one-off builds that really push the level of playability in the modular sofubi line. Consisting of a total of 6 off-the-wall creations, each cast in Turbopistola’s exclusive clear black, the soft vinyl figures have been priced between $25-$40 plus shipping. Heading to the artist’s online store tonight (10/28) at 9pm Eastern time, we suggest setting your alarms to avoid any disappointment- these particular builds will never be offered up again!

Featured here last week, we thought we’d just give you guys a little reminder that Turbopistola‘s Ion Men artist proofs will be going on sale later today! Consisting of a total of 8 different builds that utilise all of the series’ overwhelming number of different parts, the 5″ tall figures have been cast in a sleek clear black soft vinyl by Siccaluna Koubou for this release. Available in super-limited quantities, all 8 variants have been priced at just $25 plus shipping, each coming with a total of 6 points of articulation and 7 fully interchangeable parts for your building and customising pleasure. Dropping in the Turbopistola store at 9pm EST tonight (10/23), all of the available figures can be viewed ahead of time right here…

We’ve seen them released in a number of exclusive runs over the past couple of months, so it came with great pleasure today to find that the long awaited Ion Men will finally be getting a full online release next week courtesy of the toys’ co-designer Turbopistola! Cast in a super-sleek clear black vinyl for this artist proof run, Turbs will be offering up a total of 8 different builds this time around (including the pictured transforming Uchusen), each coming with a total of 7 fully interchangeable parts. Priced at a wallet friendly $25 a piece, the figures will be touching down in the Turbopistola store next Wednesday at an undisclosed time… Can’t wait to get your fix? Then you’ll be glad to know that Lulubell are currently offering up their remaining NYCC exclusives in both black and blue. Check them out here!

After a whopping 14 months on the drawing board, Any Old Ion‘s labour of love, the ‘Japanese Ion Men’ modular sofubi have finally been revealed in near-finished factory sample form! Consisting of a staggering 51 different soft vinyl cast parts designed by A.O.I in conjunction with turboPISTOLA, the series features a number of interchangeable pieces inspired by previous A.O.I releases ‘Atomic Beartank’ and ‘Seismic Ace’, Spanky Stokes’ Stroll, plus a number of all-new designs from the pair. Cast in a soft Japanese vinyl by none other than Velocitron, we should hopefully be seeing the first release soon… We’ll be interested to see whether the line will be offered up as a set of individual parts or as fully assembled bots, and of course, how colour will be dealt with considering the interchangeability factor- the possibilities are limitless! Either way, this will be one series any diehard ‘bot fan will NOT want to miss…

It’s been a while since we’ve featured AnyOldIon (formerly Smash Tokyo Toys), so it came with great pleasure this week to find that the guys are still feverishly working away on completing their awesome-sounding modular robot line. In conjunction with Turbopistola, the guys set about designing a huge selection of different heads, bodies, arms and weapons, which, as you can see from the shots above, are already taking shape as initial sculpts… Due to be cast in a Japanese soft vinyl, we’re keeping our fingers crossed for at least some test shots of the first release by the end of the year. Can’t wait for your mecha-robot fix? Then you’ll be glad to know that Tenacious Toys are still stocking the original Smash Tokyo Toys “Seismic Ace” for an unbelievable $40 plus shipping right here…