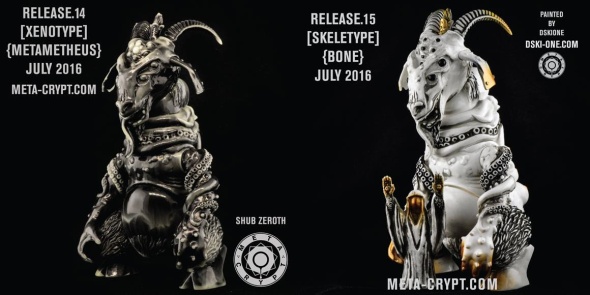 Metacrypt‘s Brian Ewing and Just Jewett are set to storm triumphant and terrible at SDCC ’16 with a number of awesome releases, including patches, pins, and most importantly, toys! Here’s a quick rundown of what you can expect at their booth (#4505) when the doors open at the con later on today…

Shub Zeroth Release.14 [Xenotype] {Metametheus}// The first of 2 Shubs that’ll be available at the con, Metametheus has been produced in an unpainted swirled black and glow-in-the-dark vinyl. Coming packed with a special edition, black/glow ‘Factum Ab Astris’ mission pin, these have been priced at $120.

Shub Zeroth & Drude Release.15 [Skeletype] {Bone}// Produced in a white vinyl, “Bone” has been treated to a series of black rubs and white/gold sprays courtesy of DSKI One. Coming packed with a matching Drude acolyte, these come in at just $160 each.

Drude [Blessedtype] {Blind} $20// The Drudes make their return in 4 different colorways this time around; clear, GID, Gray swirl, Black/White/GID swirl, and Pure Black. Sold random and blind-bagged with a minizine, these have been priced at just $20 each.

Making a limited appearance at NYCC ’15 over the weekend, the “Supermoon” Shub Zeroth from Metacrypt is now up for grabs online! Standing at around 9″ tall and featuring numerous points of articulation in the arms, legs and head, the demonic goat-beast remains unpainted this time around, coming cast in a gorgeous GID soft vinyl. Currently available in the Metacrypt store right here, the “Supermoon” Shub Zeroth will set you back just $100 plus shipping… 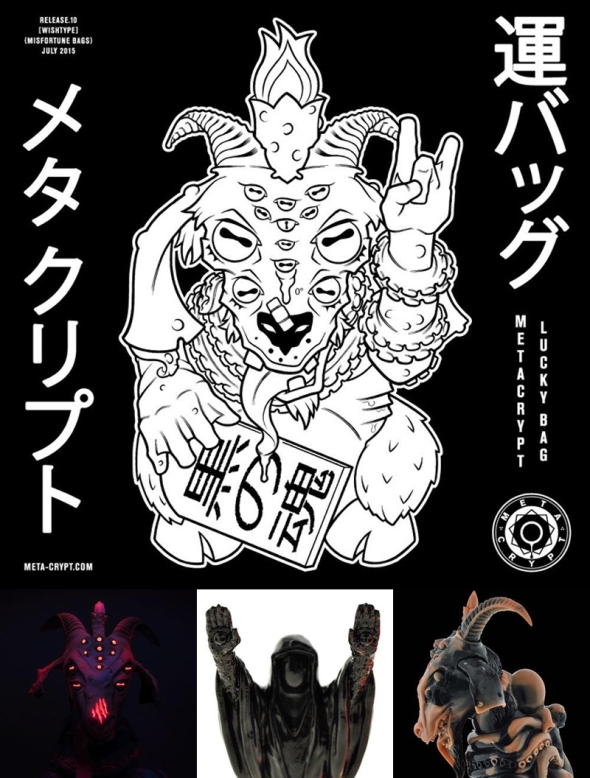 “Now is the time…when once a year we feeble things scurry out from under shade of tree and show our naked and frail selves to each other in San Diego. At Comicon. Metacrypt will be there to guide you into the cold, pale stench and send you on your way toting an unknown bevy of maliciously imagined merchandise that will haunt your house forever. And ever…”

The collaborative duo behind Metacrypt – Hateball and Brian Ewing – are proud to announce that they will once again be in attendance at SDCC this year, bringing along a whole heap of new exclusive items to their dedicated booth space (#4503) later this week! Here’s a quick rundown of exactly what will be on offer…

“Black Light Rainbow” Shub Zeroth// Painted up by none other than Candie Bolton, these come with fluorescent and pastel hues of blue, orange and green over butter yellow soft vinyl. Limited to just 5 pieces, these have been priced at $130 each.

“Scream with Me” Shub Zeroth// A limited batch of these have been “discovered and rescued from the depths”. Coming in a marble orange and slate swirled vinyl, this super-limited batch have been priced at $100 each.

Created for his upcoming “Scream With Me” show at Gallerie F, Brian Ewing of Metacrypt is proud to announce the 9th release of Shub Zeroth, the [Special Type] {Scream With Me} edition! Marking the first official marbled run for the figure, the 9″ tall piece has been produced in a swirled mix of unpainted deep grey and flesh colored soft vinyl. Available in extremely limited quantities at the show’s opening this Friday, November 7th from 6pm – 10pm, the latest Shub will set you back just $125 each…

The guys over at Lulubell Toys have been working around the clock to make that this year’s SDCC is packed with even more exclusives, one-offs and figure debuts than ever before- so much in fact, that it’s going to take a couple posts over the next few days to cover it all! Kicking things off in chronological order, we give you a quick rundown of the vast array of Grody Shogun madness that’ll be up for grabs on “Preview Night” this Wednesday right through to Friday, July 25th…

Multum In Parvo- In honour of Lulu Amy‘s extensive work with Arizona Pug Rescue (and her huge obsession with the breed!), Luke Rook aka Grody Shogun has realised the adorable crinkle faced canines in sofubi! Rather aptly translating to “a lot in a little package”, Multum In Parvo will be up for grabs in a number of different one-off colourways including painted, unpainted, mixed parts and marbled- each coming in at $35-$50 with $5 from every sale going directly to APARN to support their ongoing rescue and rehabbilitation efforts. 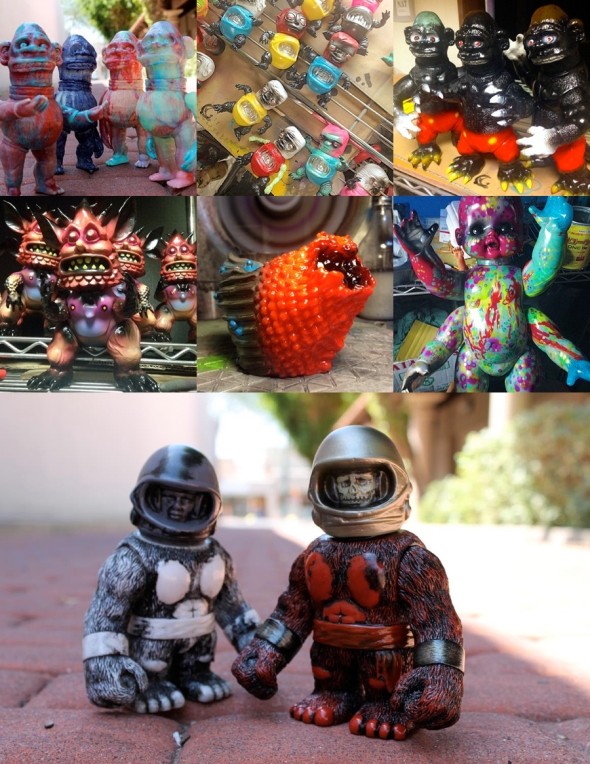 Bella Muerta micro-run- At 10am, Lulubell will be putting out 5 of the amazing “Bella Muerta” figures, a beautiful collaboration between Grody Shogun x Evil Dave. Each one is airbrushed and then masterfully handpainted by Evil Dave, with no 2 alike. Standing at around 9″ tall, these have been priced at $100 each. 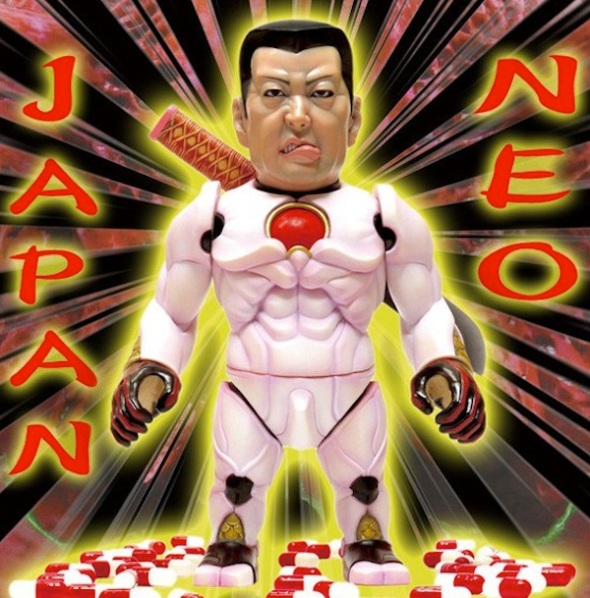 Neo Japan debut release- Joining the Wonderfestival release on the Sunday, Lulubell Toys have secured a batch of RESTORE‘s NEO JAPAN for SDCC! Standing at 7.5″ tall and coming complete with honcho knife accessory, the first 5 have been allotted for a release at 10am on Thursday, with another 10 up for grabs on Friday and 5 again on Saturday. Priced at $95 each, these are limited to just 1 per customer. Not able to attend the con this year? Then fret not! A further batch of 10 will be heading to the Lulubell online store on August 1st.

“Grayve” Shub Zeroth- Metacrypt‘s Shub Zeroth is back from the dead in an exclusive “Grayve” version for SDCC 2014! From the creative genius of Brian Ewing x Hateball, Lulubell are offering con-goers a chance meet the guys and snag one of these ghostly ghouls for $120 at the booth between 1pm-2pm. A super-limited batch of grey blanks will also be up for grabs at $100 each, so be sure to get there early to avoid disappointment! 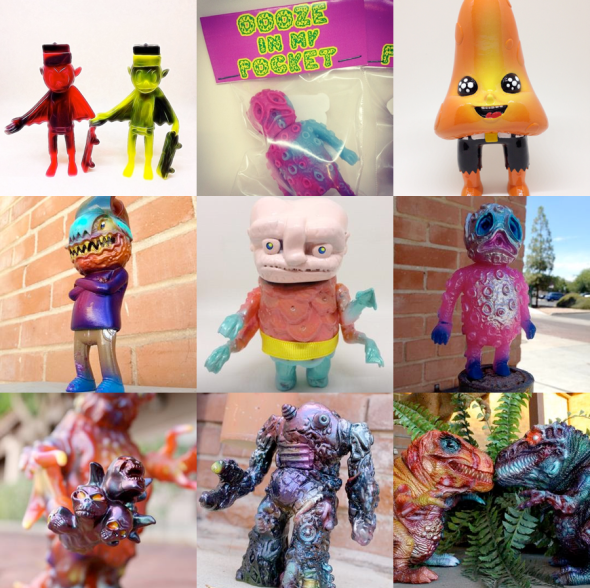 SDCC Young Gohsts- Ferg has teamed up with Grody Shogun for a whole slew of Young Gohst micro-runs and marbled editions, including (from top) the Fire Crotch edition ($50), the Youg Gohst Faced Killahs painted by Dski One ($50), the Grody Marbles ($55) and the Shi Shi Odor edition ($50). Touching down at the booth at 11am, Ferg will also be on hand for signing. 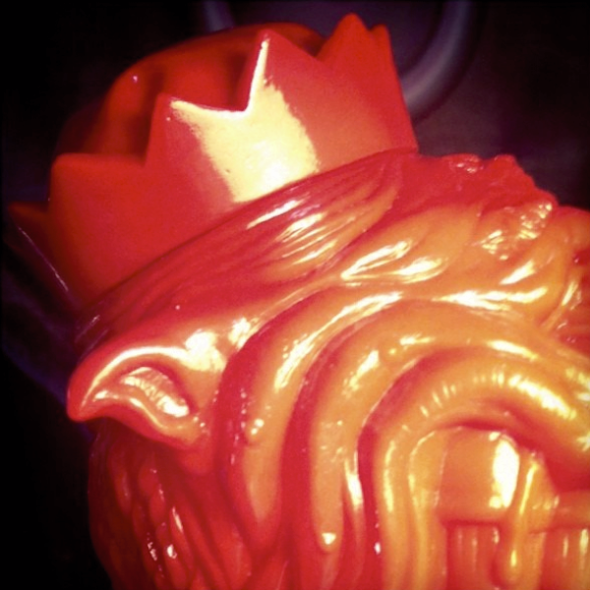 Zine Wolf- Co-creator of Shub Zeroth, Hateball, has teamed up with Lulubell Toys for the release of his debut solo soft vinyl figure, Zine Wolf! Shrouded in mystery at the moment (aside from the image we managed to find above), we suggest keeping a close eye on the new Hateball site here for more developments as we get closer to the event. Dropping alongside a whole host of other new merc from the artist including limited edition zines, patches and essays, the Zine Wolf release/signing will be taking place at the booth from 1pm-2pm.

Miscreation Toys lottery- MT’s Autopsy Zombie Staple Baby is set to receive 2 micro-run releases, a “Peek-a-boo” GID version swirled in clears, opaques and glitters ($125) and an “Obake” edition, coming hand painted by Jeremi Rimel in a run of 4 ($175)! Both up for grabs via lottery, tickets will be handed out from the booth at 3pm with a draw to be held at 3.15pm. On top of the AZSB’s, we’ll be keeping our fingers crossed that the previously teased Gergle Autopsy Baby will be making it’s debut at some point too- stay tuned for more info closer to the event!

Expect the full lowdown for Saturday’s releases, including figures from both Mishka and Mutant Vinyl Hardcore, later in the week…

“Cold is not the word. This is…there is no coming back from this. This is not cold. This is not frozen. This is not ice. Ice can be melted. A freeze passes…gives way to something new, something refreshed, something reborn. This state that I’m in has nothing temporal to it. I am, I was, and I forever will be in this suspended state of misbegotten horror. My eyes, my mouth, my nose, my mind: all locked open and forced to witness that before me…that which does not move, save for my point of view. Save for my unreal vantage into something that should never be seen for a shred of a moment, much less ten billion billion times that. No. It sees me seeing it. It will never let me go. Never let me move.”

Metacrypt are proud to present the first Shub Zeroth release for 2014, teaming up with Lulubell‘s Dski One for a micro run entitled “Permafrost”. Produced in a light grey soft vinyl for the release, the stunning 9″ tall beast has been sprayed by the artist in a jaw-dropping mix of metallic/pearl sprays and hand painted detailing. Coming packed with a custom header card, the figure will be heading to the Lulubell Toys store this Thursday, May 1st at 11am PST, priced at $130 plus shipping…

As if the Kai Thunder Vs. Gorgonzola preorder earlier this week wasn’t enough, BLObPUS has just revealed that he will be teaming up with Metacrypt for yet another 2 pack custom release! Featuring the mighty Shub Zeroth alongside BLObPUS’ own Kaijin Dokugan mini, the pair have been cast in a black soft vinyl, complete with matching metallic and flesh-toned sprays. As with the previous release, these guys will also be offered up as an open preorder, coming in at 14,800yen (approx. $150) plus shipping. Available for a 5 day period starting November 28th at Midnight Japan time, anyone interested is going to need to order through the BLObPUS blog via e-mail right here…