Touching down right here at 11pm London time this Friday, February 24th, a number of customs, painted runs and blanks from Submission Toy’s Tru:Tek and Rich Page will be available, including;

Skinner is proud to reveal that his titanic Morgogg sofubi will be making a welcome return this week in an all-new painted colorway! Whilst little info has been shared about the release so far, it would appear that the 14″ of Ray Harryhausen-inspired barbarian has been produced in a red soft vinyl this time around, coming with gorgeous metallic ice blue, yellow and black sprays. Gong on sale in the Critical Hit store alongside a whole heap of other new items Friday, May 27th, drop time, pricing and edition size are still to be confirmed so be sure to keep a close eye on Skinner’s Instagram feed for the full lowdown soon… 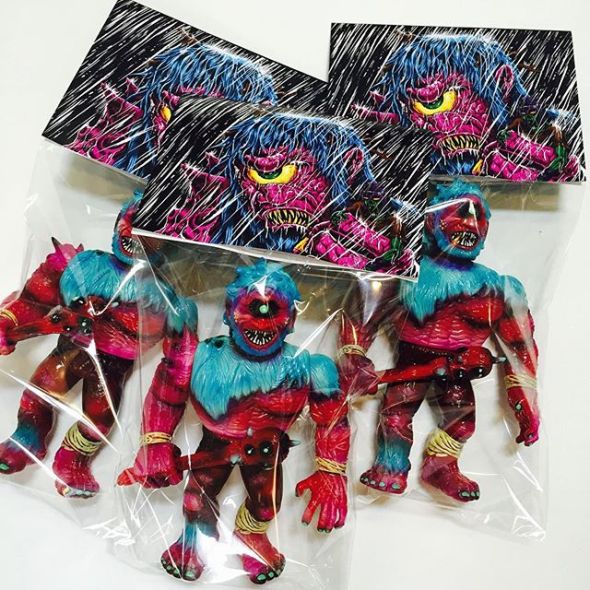 The mighty Skinner has just revealed not one, but two new toy releases he’ll have up for grabs online tomorrow! First up, we have the return of the club wielding Ogos in an all-new “Red Rage Fallout” colorway. Standing at a monstrous 13″ tall and featuring articulation in the waist, arms and head, the cycloptic, Harryhausen-esque beast has been produced in a deep red soft vinyl complete with blue/black/gold sprays and dry brushed detailing. Limited to 10, these have been priced at just $200 each… 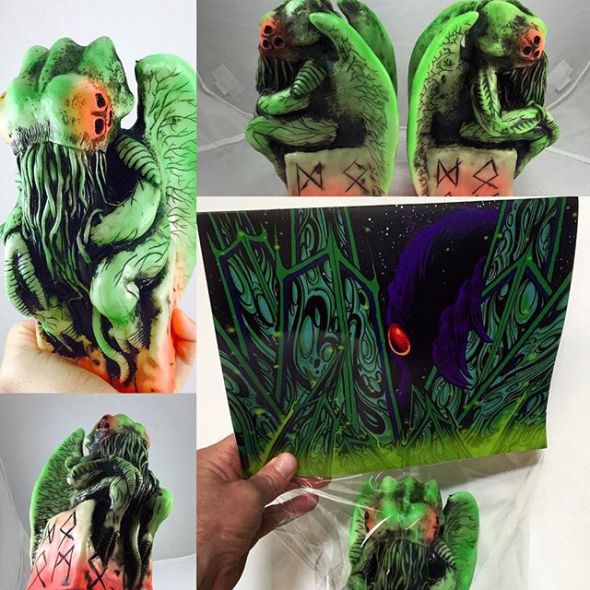 Next, we have Skinner’s latest collaboration with sofubi producer Velocitron, the GID Cthulhu!  Coming in at around 9″ tall, the sitting Lovecraftian beast has been cast in a glow soft vinyl with neon green and orange sprays over a detail hugging black wash. Also limited to 10, these will be joining Ogos in the Critical Hit store this Friday, April 1st at Noon Pacific for just $80…

The mighty Skinner is the latest artist to take on Leecifer‘s “Picklebaby” sofubi, coming with a special “Cursed” micro-run later this week! Standing at around 8″ tall and featuring articulation in the neck and shoulders, the hideous looking creatures appear to have been cast in a black soft vinyl this time around, coming with layers of putrid green VColor sprays, rubs and hand painted detailing. Limited to just 8 pieces – each coming packed with a cursed twig necklace and custom header – Skinner’s Picklebabies will be touching down in the Critical Hit store this Friday, September 11th at Noon Pacific for just $100 each plus shipping… Head over to Skinner’s blog to check the extensive backstory on these creepy chaps! 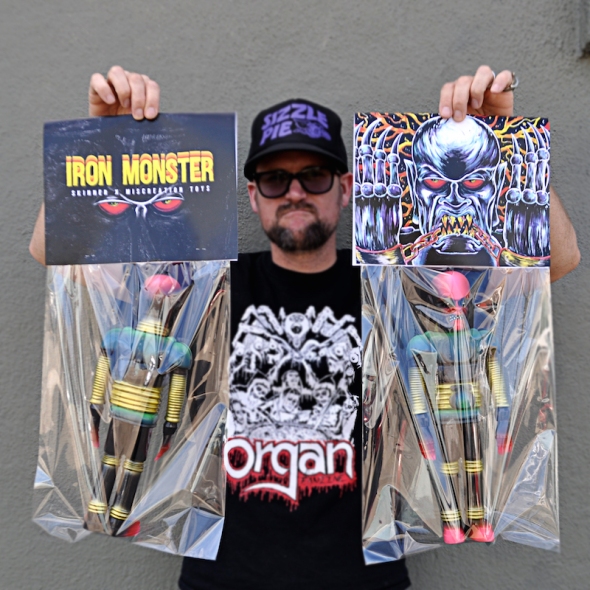 “Be careful what you create, because it can UNCREATE YOU!! is that a cool tag line from an old school horror movie or is it some kind of random threat from one of your angry parents? I’ll let you decide…”

Legendary artist Skinner has just revealed that he’s the latest to take on Miscreation Toys‘ awesome “Iron Monster” sofubi, proudly presenting the “Vintage Robo” micro-run! Inspired by Dr Zorka’s robot in the 1939 scifi/ horror B-movie serial “The Phantom Creeps”, the towering 15″ figure was designed by Rimel, digitally sculpted by iamscumbag and produced in Japan courtesy of Grody Shogun. Cast in what appears to be a black soft vinyl this time around, the limited batch of just 6 figures have each been treated to a plethora of vintage-style sprays and rubs courtesy of Skinner. Coming bagged with a giant size header card, Skinner’s Iron Monsters will be touching down in the Critical Hit store this Friday, August 14th at Noon Pacific time, coming in at $250 each plus shipping…

Taking a break from the madness that is SDCC this year, legendary artist Skinner will instead be holding a huge online this week for his ever growing legion of fans! Set to feature a number of new prints and t-shirts, the “I’m not going to comic con” sale will also include not one, but two new(ish!) toy releases. First up, we have the debut of “Abominox the forgotten one”. A mash-up of Skinner’s head from MVH collaboration Krawlus with the body from Morgogg/Ogos, the lumbering 12.5″ tall figure has been produced in an unpainted blue soft vinyl this time around.

Limited to just 20 pieces, each coming with an oversized custom header, Abominox will set you back just $150 plus shipping… Next, we have the return of Skinner’s Lurker mini figures. Sculpted by David Arshawsky and produced by Unbox, the set of 6 2″-2.5″ figures will be available in 2 different colorways – classic black and GID – both coming packed with two mini giclee prints for just $20 each… Look out for both Abominox and the mini Lurker sets in the Critical Hit store this Friday, July 10th at noon Pacific time… 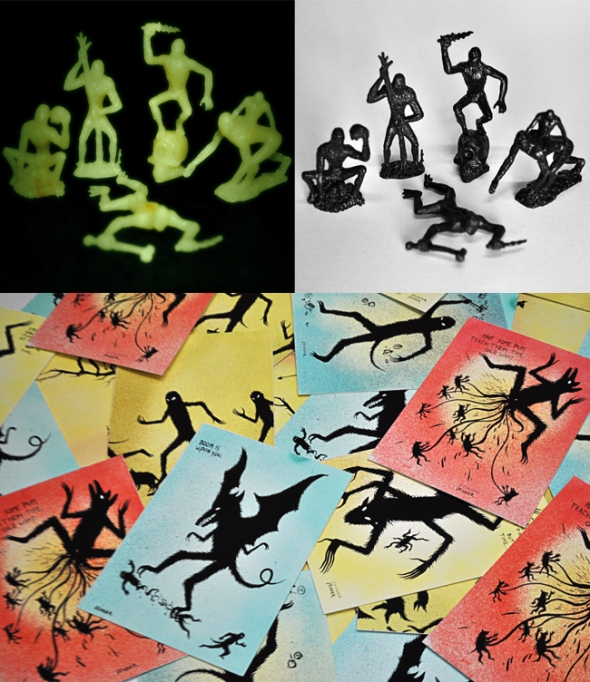 Having seen a limited run in blank vinyl alongside an exclusive painted release through Medicom Toy, Skinner and Unbox Industries‘ Sextopigon has just been revealed in a stunning hand painted colorway inspired by the figure’s original artwork! Designed by Skinner and sculpted by David Arshawsky – the original designer/sculptor of the original TMNT line and Skinner’s recent Lurker minis – the hugely ambitious figure features a staggering 9 legs and 6 arms, all coming complete with at least 1 point of articulation each. Expertly painted up by the Unbox team in a swathe of muted washes and brushwork, the sheer level of detail leaves us wondering if this version will ever make it into production… We guess only time will tell! Keep track of the Unbox Instagram feed here for more detailed shots of the piece over the weekend!