Joining the slew of exclusive kaiju, sofubi and keshi that’ll be up for grabs at the Rampage Toys x Disarticulators ToyCon UK booth next Saturday, our very own Tru:Tek is proud to reveal the resurrection of one of the craziest ever resin figures in keshi form… the mighty Tanklopula! The brainchild of Triclops, Jesse Destasio and The Tarantulas, the Rampage sculpted mini figure features signature elements from all 3 artists, including tentacles, a Nibbler chest piece and Tankhead turret- all coming fitted with fully interchangeable, 100% Glyos compatible joints. Originally making a very limited appearance back in 2011, the latest (and most likely final) run has been produced in a urethane rubber courtesy of Tru:Tek, with the batch of 15 each coming in a special one-off colorway inspired by a wide variety of 80s and 90s pop culture. Touching down exclusively at the Rampage/DA booth (#16) come opening time at 9am, Tanklopula has been priced at £35 a piece. Stay tuned for details of online sales, plus AP releases from both Destasio and Triclops soon!

Teased here a couple of weeks back, Jesse Destasio‘s latest iteration of Tankhead is now available online! Originally debuting in resin way back in 2010, this new version has been created in collaboration with Eric Nilla, coming cast in a flexible keshi style rubber. Available in either solid flesh or random mixed colours, the 2″ articulated figure can be found in the Eric Nilla store right here for just $17 plus shipping… That not enough to quench your keshi thirst?! Then you’ll be glad to know that Eric has loaded the store with a ton of other rubber goodies, including Nama Niku’s Eraserhead, grab bags and MOTU keshi recasts starting from just $10! 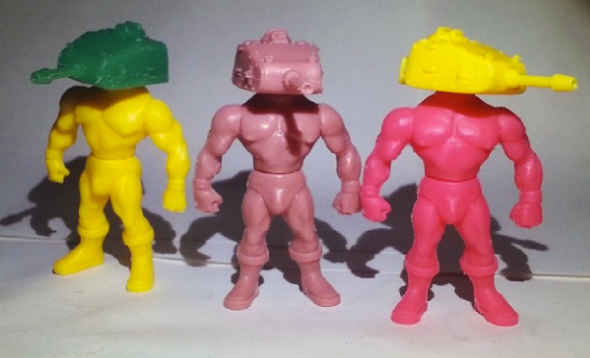 Teased here a couple of weeks back, Eric Nilla has revealed that he’ll be teaming up with Jesse Destasio for a special keshi version of Tankhead! Originally conceived in resin way back in 2010, the resurrected mini figure has been cast in a flexible rubber this time around, coming with articulation at the neck and a choice of both solid and mixed part colourways. News on the release is unfortunately still forthcoming at the moment, so be sure to keep a close eye on both Nilla and Destasio‘s IG feeds for more details soon…

After a brief hiatus from the mini figure scene, it would appear that Eric Nilla will be returning with an all-new keshi custom, the Death-Match Tiger Burn Laser Beast! Kitbashed from a vintage ‘Tiger’ Laser Beast, the figure has been produced in a similar style to the super-rare BB Gumball figures, coming with a solid white cast rubber body and red disc insert. The real pull has got to be those additional limbs though- taken from Jesse Destasio’s Tankhead figure, we’re left wondering if this will remain a one-off or become an official collab at some point… Here’s keeping our fingers crossed it’s the later! Keep track of the artist’s dedicated blog right here for more details soon.