The guys over at UK based designer toy retailer The Hang Gang are very pleased to announce their latest sofubi exclusive, Dream Rocket’s awesome Cobraman! Taken from the ongoing Ninjen (Human) series, the fully articulated beast stands at around 7.5″ tall, coming cast in a sandy coloured soft vinyl with the Hang Gang’s signature exclusive pink and turquoise sprays. Up for grabs in strictly limited numbers through the store right here, Cobraman has been priced at just £49.99 plus shipping… 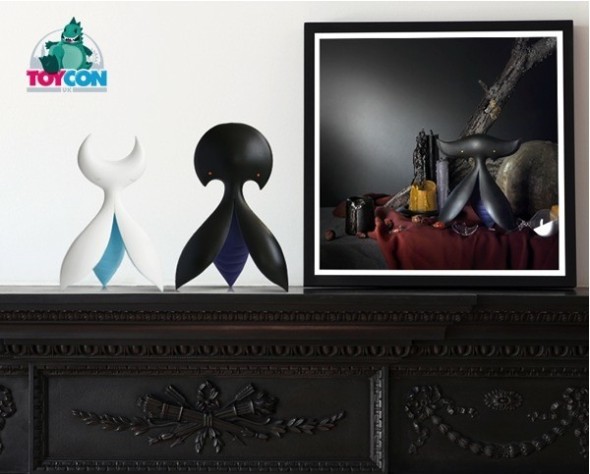 Joining the trifecta of resins dropping at The Hang Gang’s ToyConUK booth this coming weekend, Sergey Safonov shares details on yet another batch of exclusives for the con, this time around for up and coming art print/toy purveyor, Fugi.me… Consisting of a set of giclee photo prints of Sergey’s Govra figure, these will also be joined by the return of said figure in the pictured ‘Zenith’ colourway, plus the debut of all-new resin, ‘Eclipse’. Sergey will be on hand at Fugi.me’s booth from 1pm for both the release and signing, so be sure to head over on the dot to be in with a chance of securing these incredible pieces!

Whilst unfortunately unable to make ToyConUK in person next week, Russian toy artist Sergey Safonov has created a number of new releases, collaboration pieces and even prints that will be available at various booths- the first of which to be revealed coming in the form of 3 exclusive colourways for UK designer toy emporium, The Hang Gang. Consisting of a ‘Grape Juice Drop’ Chorus Boy Godot, a ‘GID’ Darkest Night Moon Mouse and ‘Super Glossy Black’ Luno, each piece has been hand cast and painted by the artist, coming in extremely limited quantities. Pricing on the pieces is still forthcoming, but Safonov has stated that any remaining stock will be headed to the Hang Gang online store soon after the con.

Always striving to make the world of sofubi more accessible to the UK art toy scene, The Hang Gang have secured yet another awesome toy for their store… the exclusive Ugly Unicorn from Rampage Toys! Cast in The Hang Gang’s signature pink, the figures have been finished in a mixture of black and red sprays with hand painted detailing. Limited to 5 pieces, the HG Ugly Unicorns will be available from the Hang Gang site next Friday (July 6th) at 6pm GMT for just £34.99 plus shipping…

With a number of Star Wars themed celebrations taking place around the world last Friday, we decided to get a piece of the action by heading down to the highly anticipated “May the 4th be with you” group art show at FullCircle, Leeds. Curated by Barry over at the Hang Gang, the massive event played host to over 30 different artists work- both art and custom toys- including the likes of Richard Page, Jon Paul Kaiser, Guy McKinley, Drew Millward, Squink, Bryan Brutherford, and Elmos Empire, most of which were on hand to talk Star Wars, consume art, and of course, drink beer!

As you can see, a great time was had by all, but the fun didn’t stop at the artwork and alcohol… Nestling amongst the various paintings, prints and customs was one of the largest displays of vintage Star Wars toys we have ever witnessed! Featuring a massive selection of carded figures alongside some extremely rare playsets and vehicles (boxed Imperial Attack Base and Troop Transporter anyone?!!), the whole collection was housed in a beautiful display that reportedly cost around £1000 to construct!

As well as the plethora of Star Wars themed art and toys, Barry also laid down one hell of a party… From the wonderful array of treats conjured up from the Wookie Cookie handbook, through to the patrolling Storm Troopers, A New Hope screening and pop-up shop, no expense was spared in making this a great night. A massive thanks to the organisers and all the great people who turned up, and here’s hoping for more of the same next year! 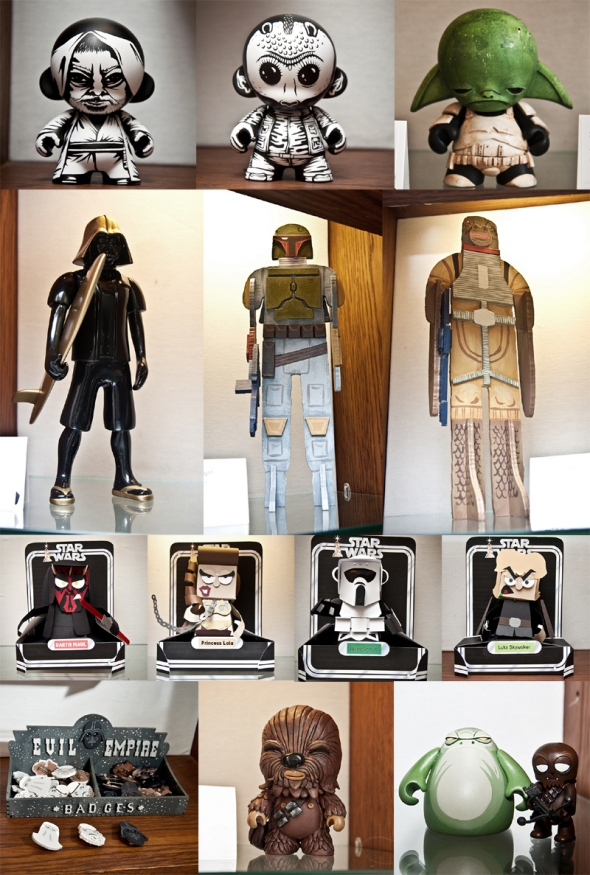 We couldn’t resist picking up a piece from the show, and what a piece it was! One part of a triplet set (the other 2 are pictured above), Jon Paul Kaiser’s “Chewie” Mini-Munny was easily one of our favourite customs on display. Now sitting proudly on display at the MAN-E-TOYS HQ, we can’t help but feel he needs a certain UME Wookie (also above) to keep him company!

Anyone interested in picking up one of the many pieces will be glad to know that they will be heading to the Hang Gang store in the next few days. Be sure to keep checking back regularly, as we can guarantee they won’t be around for long… 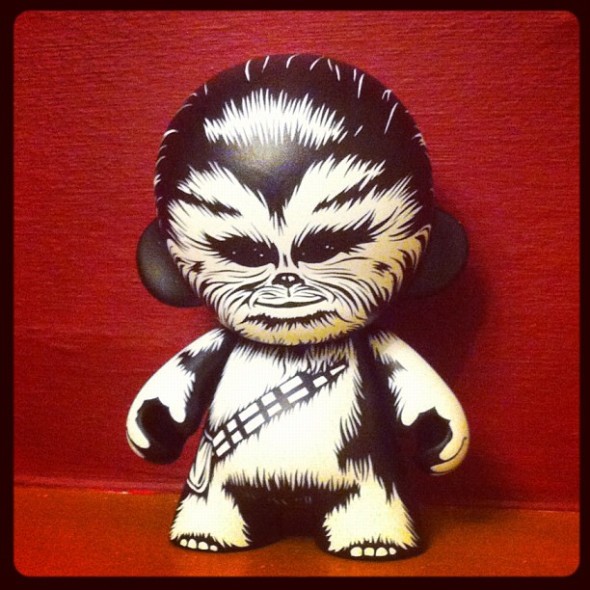