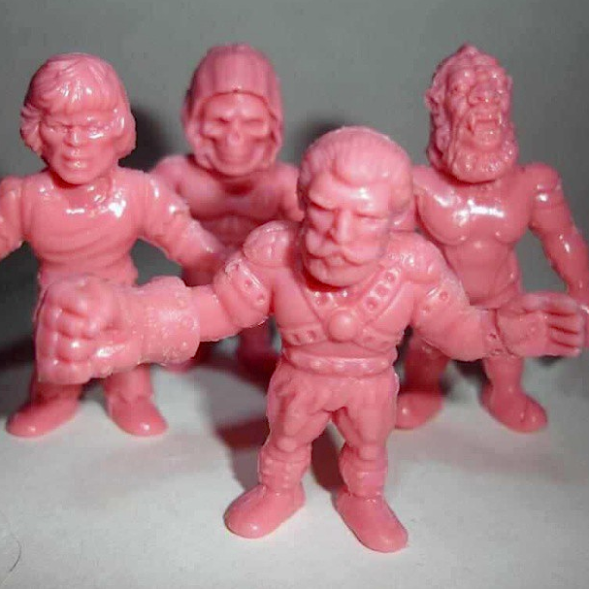 As if news on the mighty Meatgrinder wasn’t enough today, master caster Eric Nilla comes with yet another must have mini figure release… the Muscles of the Universe’s Fisto! The fourth figure to feature in the M.U.S.C.L.E x MOTU mash-up series conceived by Wolf Voigt, Fisto has got to be the best yet- not only featuring a shrunken vintage action figure head, but oversized fist too! Due to be touching down in the Nilla store soon, expect to see the little guy cast up in a huge selection of different colours for around $12 plus shipping…

Originally teased way back at the beginning of the month, Eric Nilla has just dropped his latest batch of MOTU (M.U.S.C.L.E’s of the Universe) figures, the special edition 2-Tone Skelitors… Originally created by Solar Color Dust’s Wolf Voigt, the M.U.S.C.L.E x MOTU mash-up has been recast using a special ‘spot’ technique that results in the awesome 2-Tone effect seen above. Produced in an extremely run of just 7 one-off pieces at the moment, the figures can be found on the Nilla store for just $16 plus shipping… Joining Skelitor, Eric has also been kind enough to drop another 2 highly anticipated figures onto the store as well. The recently posted ‘Fish’ Ghoulie re-make and Hellopike’s Kinnikuthulhu both make their debut, available in a huge selection of different colours for just $13 and $15 a piece… Anyone interested is going to need to head over to the store quick, stock has already begun to quickly disappear!

UPDATE// The 2-Tone Skelitors have unfortunately since sold out, we’ll be enquiring about a possible re-stock, so stay tuned for more info soon…

No sooner than posting Hungry Hungry Hordak earlier today, our ‘inside source’ Trustpigs kindly sent over info on another slew of previously unrevealed pieces for tonight’s (In)action Figure Show (thanks Nick!)… so without further ado, we’ll begin with the work of someone we’re sure you’re all familiar with by now- mini figure maestro, Eric Nilla! Bringing 5 of his most popular figures to the table, Eric has included a special bagged and headed batch of the recent ‘Muscles of the Universe’ recasts (originally designed by Wolf Voigt), his awesome original sculpt SD Splatter House Rick (with removable blade!), plus his super-tight reworking of the Adam Bomb GPK Cheap Toy, Sitting Adam. No news on edition size as of yet, but you can expect any remaining stock to hit the Clutter store next week priced between $12-$15 each…

The “(In)action Figure Show” will open on Saturday, January 12th with a reception from 6-9PM and be available for viewing through February 2nd, 2013 at The Clutter Gallery, 163 Main St., Beacon, NY 12508. To get first option to buy from the show, you may want to join Clutter’s Gallery Preview List.

Following the hugely successful rubber re-casting of the M.U.S.C.L.E’s of the Universe customs last month (which can still be purchased here), Eric Nilla is proud to present a very special one-off… Taking the Skelitor figure (originally created by Wolf ‘SolarColorDust’ Voigt), Eric went for an authentic Skelitor purple complete with yellow spot application- all rubber, no paint used whatsoever! No news as to whether the impressive little guy will ever be available for purchase, but our money’s on the figure making an appearance at Clutter’s (In)action Figures show next month… Expect an update on our entries for the same show this weekend!

MAN-E-NEWS// The M.U.S.C.L.Es of the Universe from Wolf Voigt x Eric Nilla… 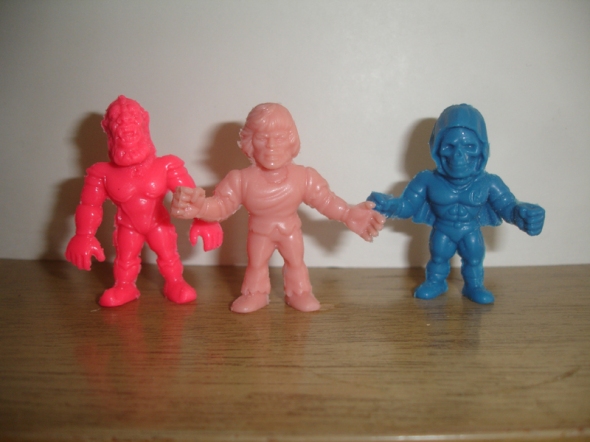 Previewed a couple of weeks back, Wolf “SolarColorDust” Voigt and Eric Nilla‘s M.U.S.C.L.Es of the Universe remakes are finally available to purchase! Featuring Wolf’s original He-Man and Skelitor customs that were originally created last year in a limited resin run, the shrunken headed enemies are now also joined by the mighty Beastman! Available in a set of 3 or individually, the rubber figures have been cast in a variety of different colours, with every 5th featuring either a thermal colour change or glow-in-the-dark finish! Priced at just $26 and $10 respectively, the M.U.S.C.L.Es of the Universe are available through the Nilla store right here. 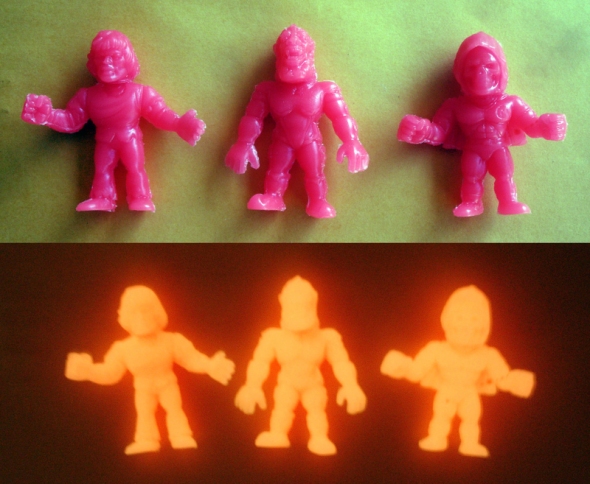 Originally created back in early 2011, Wolf Voigt’s (of SolarColorDust fame) MOTU M.U.S.C.L.E figures have become some of the most highly sought after customs in the mini figure community to date. Produced in very limited batches of resin, the pair of figures (H-Man and Skeletor), were created by shrinking down the original MOTU action figures and kit-bashing them with familiar M.U.S.C.L.E’s. Unfortunately Wolf left the customising scene to go onto bigger and better things soon after the project, meaning that no new figures were ever produced, and many enthusiasts were left without their fabled rubber versions… well that was until a certain Mr Nilla stepped in to not only reproduce both He-Man and Skeletor, but also to introduce a whole new figure, the mighty Beastman! Due to come cast by Eric in normal and neon rubber, with additional glow and thermal changers from Wolf, the figures should hopefully be touching down in the Nilla store at some point next month. Keep track of his blog here for further updates!